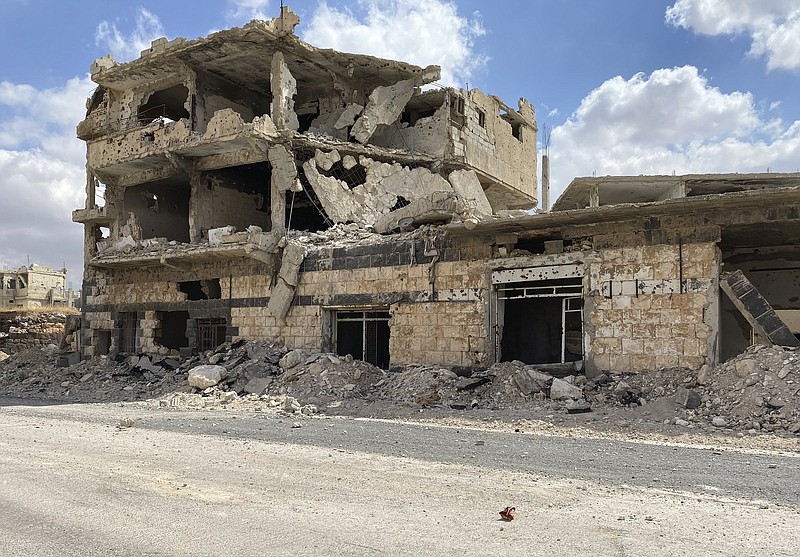 A building damaged by Syrian government forces following clashes with rebel fighters is seen in the southern city of Daraa, Syria, Sunday, Sept 12, 2021. A Russian-negotiated deal went into effect last week to end a government siege and intense fighting in the city of Daraa and with rebel fighters holed up Daraa al-Balad forcing some of them to go to the rebel-held north and others to surrender their weapons in return for amnesty. (AP Photo)

DARAA, Syria -- The badly damaged old section of the southern Syrian city of Daraa, which until recently was held by opposition gunmen, appeared to slowly return to some sense of normalcy Sunday.

The capture of Daraa al-Balad marked another victory for President Bashar Assad, whose forces now control much of the country 10 years after Syria's civil war began.

A Russian-negotiated cease-fire deal went into effect last week, ending a government siege and intense fighting in Daraa city with rebel fighters holed up in Daraa al-Balad. The agreement was riddled by fighting and government bombing of rebel-held areas, where civilians also lived.

After the deal went into effect, scores of fighters were taken in buses to other rebel-held areas north of the country and hundreds of others handed over their weapons in exchange for amnesty.

Syria's Information Ministry took a group of journalists to Daraa four days after government troops entered Daraa al-Balad, a bastion of the Syrian armed opposition since 2013. The journalists were not taken to the historic Omari mosque, where the anti-government opposition began a decade ago.

Daraa province, which straddles the borders with Jordan and Israel, became known as the cradle of the uprising against Assad that erupted in March 2011 as part of the Arab Spring revolts and eventually led to war.

At the entrance of the Daraa al-Balad district, Syrian troops took position on the first floor of a heavily damaged building overlooking a main street. Russian and Syrian flags flew over the building as Russian military police vehicles were seen driving by.

Sunday morning, bulldozers removed sand dunes that had closed roads for months. Men drove by on motorcycles while some women were walking to buy groceries from the few shops that were open.

One person walking through Daraa al-Balad was Ahmed Kiwan, 45, who came to the area to buy scrap metal from residents.

"We are now able to work freely," said Kiwan, who is from the nearby village of Tafas.

The fighting in the city this summer had threatened to undo years of relative calm along the borders with Israel and Jordan. The opposition blamed the government for the escalation, saying that troops were pressing an offensive to force insurgents to surrender.

Under the deal, nearly 900 fighters surrendered their weapons and will stay in Daraa al-Balad, according to Syrian opposition activists.

Resident Abu Wael had decided to stay with his family in the district despite the fighting. He said luckily his home was not destroyed.

"I hope that we will live safely and we have returned to our normal life," he said as he worked to get his car repair shop ready for business in the coming days.

Daraa was recaptured by Syrian government troops in 2018, but rebels remained in some parts. Assad has since regained control of most of Syria with the help of Russia and Iran.