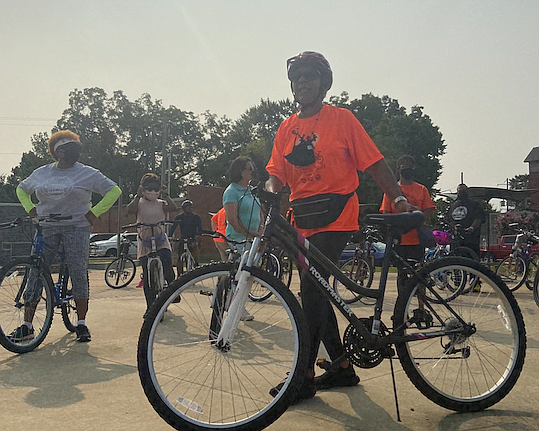 Mark Ryles and his daughter, Ana, were munching on free potato chips and sipping on Gatorade on Saturday morning at the downtown plaza as the 18th annual Tour de Bluff cycling event wrapped up and morphed into a small, impromptu street festival.

The duo, along with 19 others and Mayor Shirley Washington, completed the Mayor's Mile, the shortest of all the routes available at the biking event. It started at 10 a.m. and took most riders less than 20 minutes to complete.

Washington said about her participation, "I'm happy to be involved, especially when it comes to the kids."

Like the longer biking routes, stretching from 6 to 62 miles, the Mayor's Mile started and ended at the plaza. The event is sponsored by Novel T's, the city of Pine Bluff and the Arkansas Regional Organ Recovery Association.

Mark Ryles said he usually rides one of the longer cycling routes but his daughter is only 8 years old.

So perhaps next year, they'll tackle the 6-mile course, the youngster said.

According to event organizer Sandra Fisher, about 100 signed up. Registration started at 7 a.m., and while it's usual to start as a pack at 8 a.m., bikers left as soon as they signed in.

This was done in order to keep riders socially distanced and safe from a possible covid-19 infection, she said.

Cymber Tadlock of Pine Bluff and her riding partner, Jeff March of Conway, conquered the 23-mile route. Both ride, but are newbies to longer rides.

"We enjoyed it," March said.

March and Tadlock enjoyed the scenery as the route wound through Jefferson County Regional Park and over the Arkansas River.

Tadlock said biking over the river bridge "was a challenge but we made it."

Washington said the overall goal of the event is to get people of all ages up and moving.

Sandra Fisher and her husband Kenneth Scott Fisher, who is also involved in the event, said that cycling "is a good exercise and a person can cycle at any age or in any shape."

Sandra Fisher is a transplant from Los Angeles and Kenneth Fisher is originally from Colorado, both areas of the country where the "bike culture is big," she said.

They organized the first Tour de Bluff and added the Mayor's Mile route in 2019.

"It's grown quickly. ... It's been a popular option," Sandra Fisher said.

The two are also involved in promoting cycling in the community by advocating biking lanes and biking education.

Kenneth Fisher said cycling is a way to build tourism, such as what's being done in Northwest Arkansas and in Little Rock.

People travel from around the country to participate in these and other events, he said.

Janee Townsend, a volunteer from the University of Arkansas at Pine Bluff, said it was her first time the Tour de Bluff.

Many others, including Mark Ryles, echoed her sentiments.

MORE THAN A RIDE

Rachel Hannah gave a hula hoop a spin before describing the Tour de Bluff and after-event "as wonderful."

The 4-H Positive Youth also set up a stationary bike safety station and a steady stream of kids climbed up on one of the two bikes there.

The Arts and Science Center for Southeast Arkansas had supplies so youngsters could decorate their helmets. The Jefferson County Extension Office was offering bike safety info as well.

Although it was a cycling-related day, 6-year-old MarQuell Reed Jr. was dressed in full Taekwondo gear. Occasionally, he would demonstrate a move that he learned at the Anderson/Flo Taekwondo Studio in Pine Bluff.

Downtown real estate developer Wil Jenkins was happy with the day's event and turnout, saying "It gets folks downtown. "They'll see that it's safe."

In addition to the recent additions to the downtown area such as the Pine Bluff Public Library and UAPB's Business Support Incubator and Office Complex, both of which are new buildings, the Arts and Science Center for Southeast Arkansas has renovated and opened two art-related buildings, The ARTSpace and ART WORKS.

All of these are located between Fifth and Eighth avenues along Main Street. 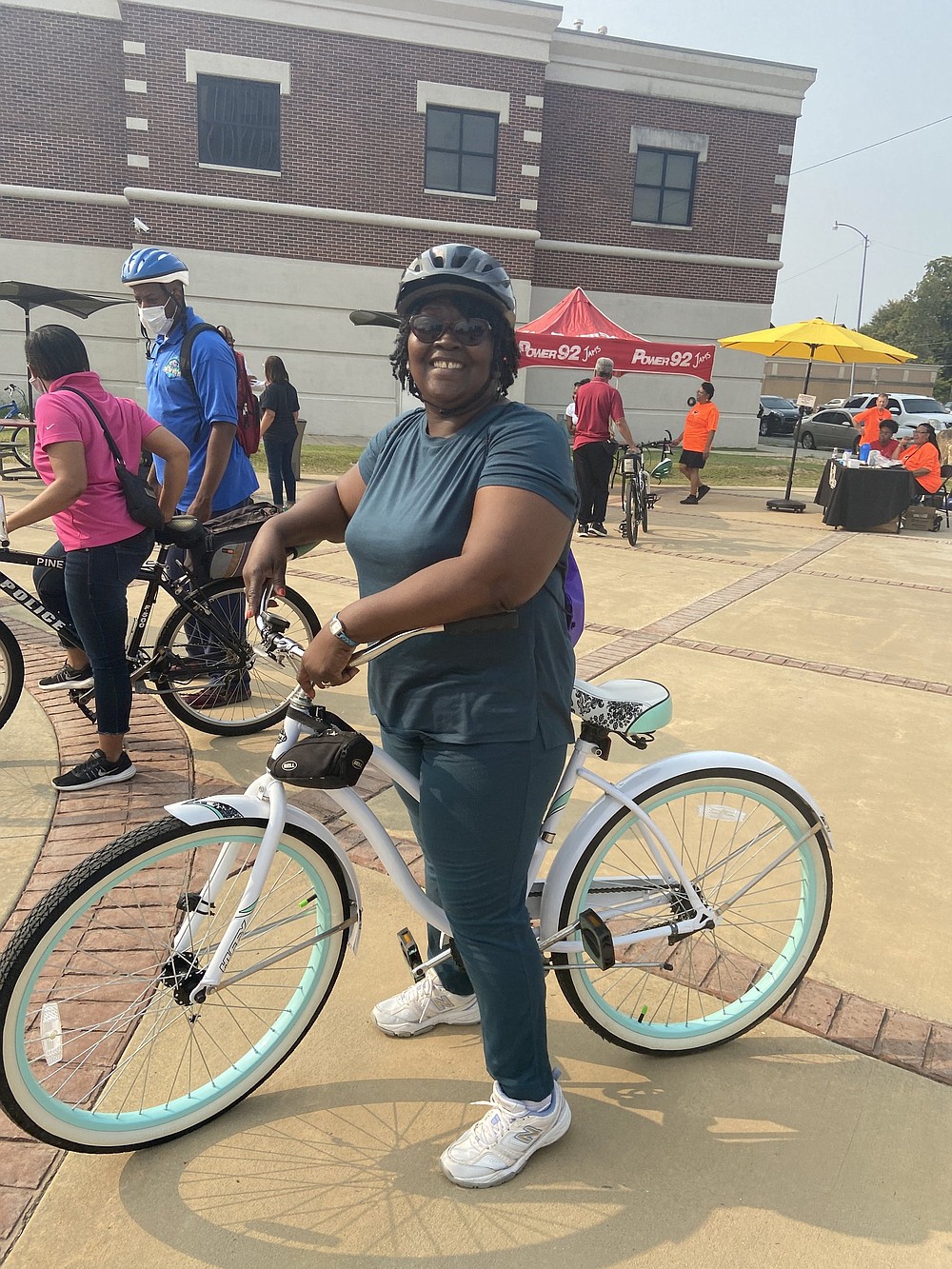 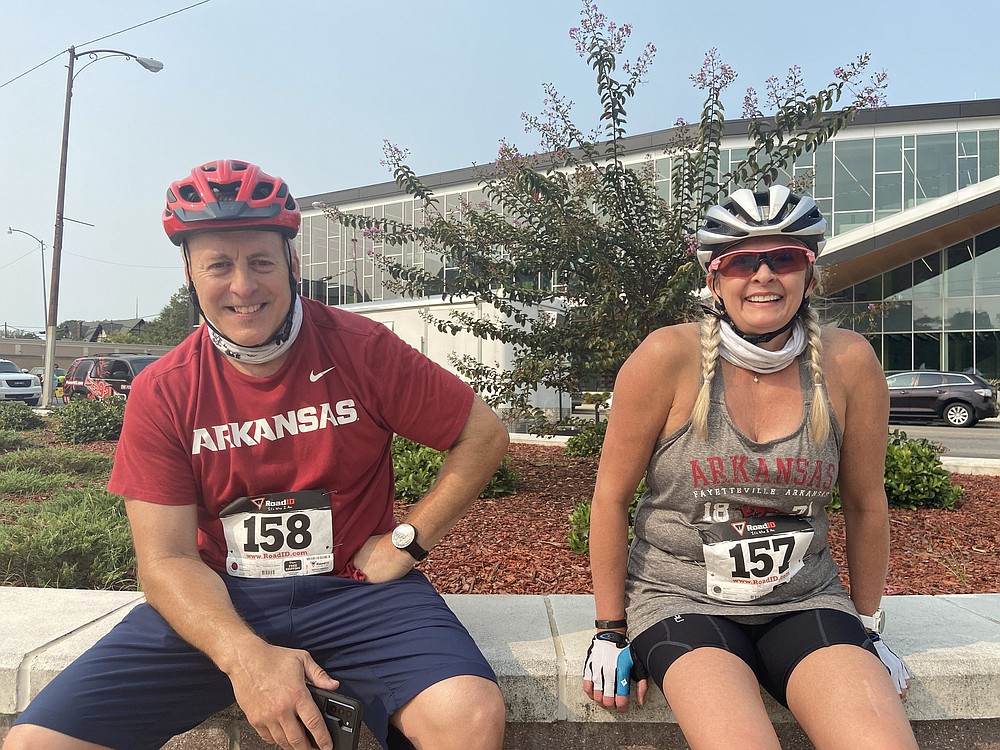 Cymber Tadlock of Pine Bluff and her riding partner, Jeff March of Conway, rode the 23-mile route through Jefferson County on Saturday. (Special to The Commercial/Deborah Horn)