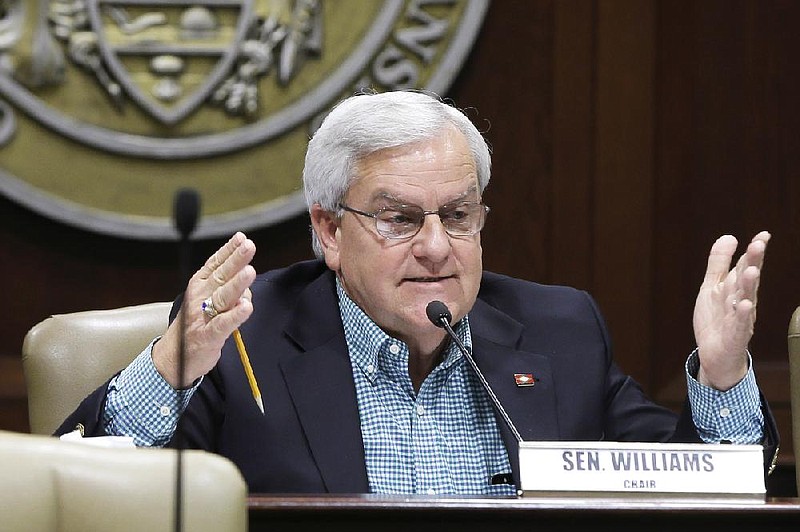 A third Republican candidate has entered the race for Arkansas secretary of state in 2022.

In an interview, Williams said he was running to make sure the state has fair elections and because he believed protests at the state Capitol that took place last summer could have been handled better.

Williams, 67, worked as Republican Gov. Asa Hutchinson's senior Senate liaison during the regular legislative session earlier this year. He also worked on special projects for the governor's office, a job he resigned from on Friday.

Prior to that, he served in then-President Donald Trump's administration for 3½ years on the Southern States Energy Board. He was elected to the Arkansas Senate in 2016 and resigned to take the federal position in 2017.

Incumbent Secretary of State John Thurston, a Republican, is seeking reelection, and state Rep. Mark Lowery, R-Maumelle, announced in July that he would mount a primary challenge to Thurston.

Josh Price, a 42-year-old former member of the Pulaski County Election Commission, is running in the Democratic primary.

Williams said there has been "so much talk about fraud around voting" over the past six months.

Claims by Trump and other Republican officials about widespread voter fraud during the 2020 election are unverified.

Asked whether he believed Trump was the winner of the 2020 election, Williams said he wasn't sure, but he believed that if the U.S. government "had boots on the ground" and conducted a full investigation in states where the race was close, the government could have uncovered enough voter fraud that that could have been the outcome.

If elected, Williams said if there was "a hint of voter fraud," it would be investigated and prosecuted to the fullest extent of the law.

Williams was critical of Thurston's response to protests that took place in the summer of 2020 following the murder of Minneapolis man George Floyd by a police officer, indicating that he believed Thurston did not play an active enough role in protecting the state Capitol.

The gatherings were largely peaceful though there were reports of spray painting, glass breaking and intentionally set fires. (An Arkansas Democrat-Gazette reporter was hit in the head in one of the protests.)

Williams vowed to stand "shoulder to shoulder" with officers should anything like the protests happen again.

If elected, he said he would spend his first year evaluating the office's processes, with an eye on reducing government size and eliminating waste.

Williams said he is "head and shoulders" above the other candidates in terms of management experience.

Williams was mayor of Cabot from 2007 to 2010 and regional director of transportation for Union Pacific Railroad.

Thurston said he welcomed Williams to the race but pushed back on his remarks about his record.

"I think it is great for Arkansans to have a choice when it comes to their elected positions and I am excited to demonstrate to Arkansans why I'm the most qualified to serve another term as secretary of state," he said in an interview. "I'm going to run on my record in this campaign and I am the only candidate that has successfully run a constitutional office, especially during the challenging year that we had last year."

Thurston said the state had record turnout in the 2020 election, and said it was the most secure and safest election the state has had.

"My goal is to make it easy for citizens to vote but hard to cheat," he said.

During last summer's protests, Thurston said the office "had to make a lot of tough decisions pertaining to the security of the Capitol grounds."

"Eddie Joe was not there and he did not know all that transpired leading up to the protests," he said. "Security of the Capitol is a priority of mine and I have had to make a lot of tough decisions to ensure that the facilities here are as safe and secure as possible."

Since the protests, Thurston said the agency has enhanced its relationships with other law enforcement agencies, increased the Capitol Police force by 10 and given officers more training and new equipment "top to bottom," including new guns and renovated command center monitors.

"We have put a lot of effort and energy into that particular division," he said.

Lowery, 64, said Williams' entry into the race amplifies what he has been saying "about need for a change in leadership in that office."

"I believe I am that needed change as the one candidate who has been most engaged in pushing for election integrity initiatives like my sponsorship of Voter ID and strengthening how we handle absentee balloting in the future," he said in a written statement.

The primary election will be May 24, according to the secretary of state's office. The general election is in November 2022.