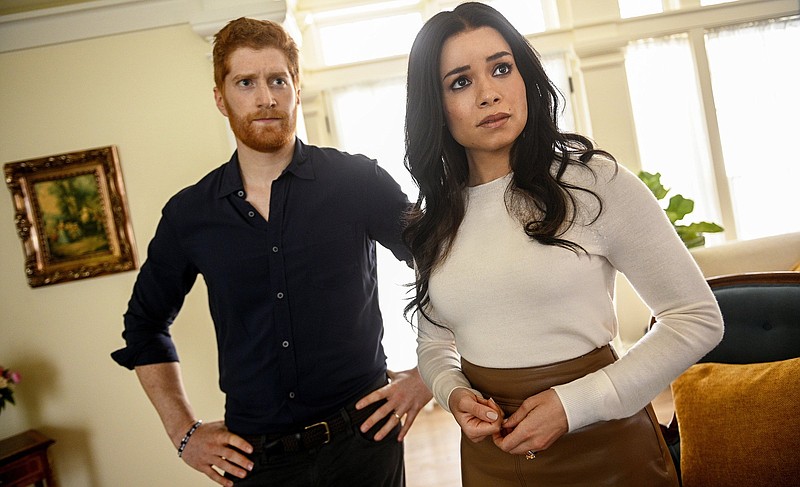 In an early scene of Lifetime's new movie, "Harry & Meghan: Escaping the Palace," Prince William and Prince Harry get into an argument about the racism that Harry's wife, Duchess Meghan, is suffering as a biracial woman at the hands of the British press — and sometimes from members of their own family.

"What causes problems isn't color, it's culture," William (Jordan Whalen) says to Harry (Jordan Dean). "Meg is American. She acts more like a celebrity than a royal, and she doesn't seem to appreciate the difference." At one point, he calls the couple "the most woke bloke and his feminist bride."

While it's one of several times in the film that William dismisses the pain that Harry and Meghan (Sydney Morton) are going through, the executive producers say that they were not trying to make William and his wife, Duchess Catherine (Laura Mitchell) the villains of the story. When Meghan tells Catherine she feels silenced when the palace forbids her from responding to tabloid attacks, Catherine says, "As an American, you value freedom and individualism above all else. Here, we value dignity above all else."

"If we saw a villain in the story, the villains are the press and 'the Firm,' which are really the players behind the scenes of the actual family," said executive producer Merideth Finn, referring to the nickname for the palace as an institution. "The people born into this family are in an impossible situation. They really don't have choices. ... The intention was never to make William seem like a villain, it was more to see him as a person in kind of an impossible conflict."

"Escaping the Palace," now streaming on Lifetime (play.mylifetime.com), is Lifetime's third Harry and Meghan-theme movie. The first, in 2018, focused on their romance; the sequel the following year showed Meghan adjusting to life in the palace. This one chronicles the lead-up to their decision to "step back" as senior royals in January 2020 and move to North America — as well as the rocky aftermath.

The movie, careful to note that certain dialogue and characters have been fictionalized, does not hold back on incidents pulled from real life: Finn and executive producer Michele Weiss kept a running Google Doc containing the mountain of news coverage of the couple. They started working on a script well before they started filming this past year, though they went through many drafts as the events kept happening, such as the couple's bombshell interview with Oprah Winfrey in March.

And yes, they remained as stunned by the disclosures (Meghan's suicidal ideations; a member of the royal family wondering about the darkness of their son Archie's skin) as the rest of the viewing audience. "We followed the story closely enough that nothing was shocking to us — but it was shocking they actually said it all," Weiss said.

Viewers who casually keep up with the royals will likely recognize the basics of the movie, such as the strained relationship between William and Harry. Close royal watchers will remember other details that made it into the script, such Meghan being criticized for her collaboration with British Vogue (the issue was deemed too "political"), and making an apparently unforgivable faux pas by using too many emojis in text messages.

While the specific lines and scenes may be heavily fictionalized, the core theme of the movie is what everyone following the saga essentially already knows: The palace wants to remain neutral at all costs. They prefer to say nothing, even in the face of brutal press coverage. But that was not going to work for Meghan and Harry, especially as the tabloid stories got worse and their mental health suffered — particularly given the tragic fate of William and Harry's mother Princess Diana.

"Harry's pretty clear that his mother was hounded by paparazzi, literally to death, and he doesn't want the same thing to befall his wife," Weiss said. "A lot of the press sort of blamed Meghan for (the move to America), but it does seem like when you actually listen to what they're saying, Harry's the driving force because of that concern."

Finn and Weiss hope viewers take away the complex nature of the situation, as they emphasize they have empathy for everyone involved — even the royal press secretaries who may or may not be responsible for some of the leaks to the media. But they also want people to think about the royals as an institution.

"We're living in a moment where people are looking more deeply at any kind of construction like a fairy tale, so this is a good moment in time to turn the concept of a fairy tale on its head," Finn said. "It just makes for fascinating discussion ... there are some people that are just holding on so tightly to this idea of what things are 'supposed to be' and should be, and then other people who are forcing change."