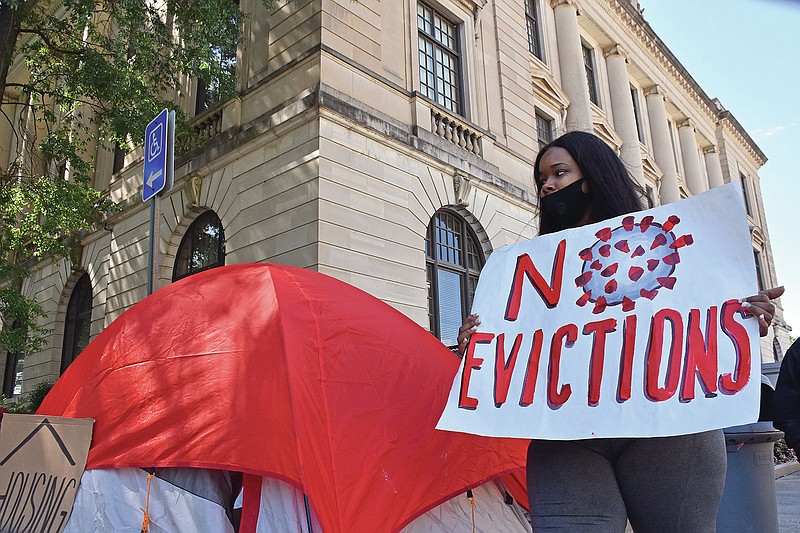 Alexis Palmer walks around a tent setup during a protest against evictions for non-payment of rent Thursday, Oct. 1, 2020 outside the Pulaski County Courthouse in Little Rock. (Arkansas Democrat-Gazette/Staci Vandagriff)

Arkansas' criminal eviction statute, the only one of its kind in the nation, is facing its third challenge in federal court.

The suit seeks to overturn the law and leave evictions as a civil matter only.

Back up: What exactly does the law say?

The law states that anyone behind on rent "shall at once forfeit all right to longer occupy" the rented space, allowing tenants to be charged with a misdemeanor and fined up to $25 per day if they don't leave the property within 10 days of notice.

The criminal statute "terminates the rest of the lease" if a tenant is behind on rent by just one day, said Lynn Foster, president of Arkansans for Stronger Communities and a former law professor at the University of Arkansas at Little Rock.

It has been used to arrest more than 300 Arkansans in the past decade, according to state data, but Foster said landlords' use of eviction notices before filing charges means more tenants are affected by the law than are arrested.

What is the lawsuit about?

Cynthia and Terry Easley fell behind on rent in August 2020 after a broken water tank left them without running water, according to a news release from Equal Justice Under Law.

Buying water and renting a portable toilet prevented them from paying rent, which was waived for only a month. They received an eviction notice in April, ordering them to move out in 10 days or be criminally charged.

It also alleges the law is unconstitutional for imposing excessive fines in violation of the Eighth Amendment. Go here to see the complaint filed in the lawsuit.

Is there an indication of how the case will turn out?

The case is newly filed, but the law has been challenged in court before and some county circuit judges have held that it is unconstitutional.

Two past federal challenges to the law were dismissed, though, because by the time the judge evaluated the case, tenants were no longer in danger of arrest or eviction.

To avoid having another case dismissed, the Easleys' lawyers are looking for more plaintiffs to form a class-action suit, Pritchard said. Plaintiffs can remain parties to class-actions suits even if their individual cases are resolved.

Anyone who has been affected by the failure-to-vacate law anywhere in the state since Sept. 2 can join.

Read more about the case from reporter Tess Vrbin. To learn about protections renters have generally, go here.