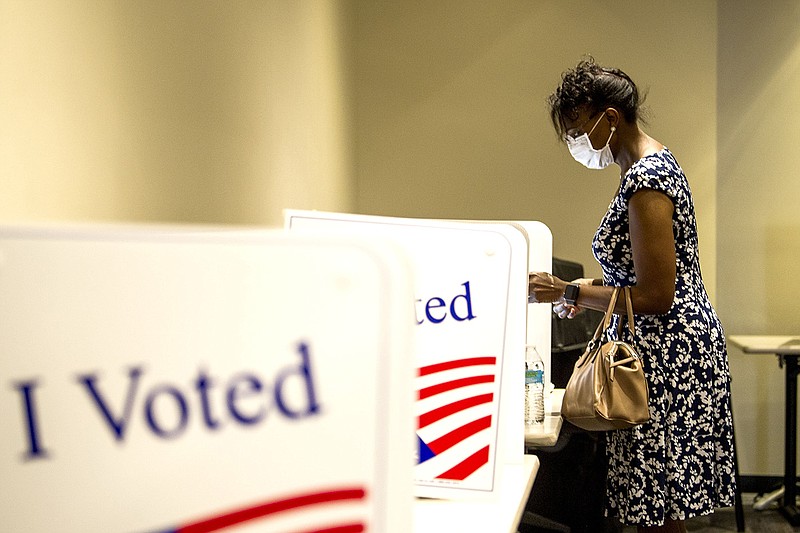 Antoinette Henderson casts her ballot on the last day of early voting at the at the Pulaski County Regional Building in Little Rock on Monday, Sept. 13, 2021. (Arkansas Democrat-Gazette/Stephen Swofford)

Members of the Little Rock Board of Directors in June voted 6-3-1 to send Scott's tax proposal, which the mayor has dubbed "Rebuild the Rock," to voters after much debate and significant revisions to the proposal that took place over several months.

With their decision today, voters will decide whether to add to Little Rock's sales-tax rate to fund what Scott has described as potentially transformational quality-of-life improvements or reject a tax increase that critics say will land hardest on working-class residents.

A total of 7,926 ballots were cast during early voting, including 919 as of 5 p.m. Monday, the final day of early voting, according to the Pulaski County Election Commission.

The net increase to the city's sales-tax rate will be five-eighths of a percentage point (0.625%) starting in January if voters give approval today.

Behind the math of the net increase is the fact that city officials will let a separate three-eighths percent (0.375%) sales tax for capital improvements expire at the end of this year. That tax was originally approved in 2011.

If the sales-tax increase is approved, the overall rate on purchases in Little Rock will be 9.625% when accounting for state and county sales taxes.

The new revenue from the increased tax -- estimated at $530 million over the next decade -- is meant to go toward a long list of initiatives, including major investments to parks and recreation offerings, infrastructure improvements, an early-childhood education framework, public-safety vehicle replacement, the Little Rock Zoo and more.

Though Scott originally sought a permanent tax increase, the tax before voters today would sunset after Dec. 31, 2031.

The mayor joined a small group of supporters of the "Rebuild the Rock" package for a "get out the vote" event Monday evening at a pavilion in War Memorial Park.

Supporters at the park were taking a break from phone banking to eat dinner while others were calling from home, Scott explained in an interview around 6 p.m. at the pavilion.

He said his team has done all that it can to educate residents on the "why" behind the initiative as well as the forthcoming results should the tax get approved.

Shortly after 6 p.m., in remarks to supporters, Scott cited job growth in the city in the time since he took office and referred to Amazon's recent investments in the city. But he said the city needs resources to fuel the growth.

Opponents of the tax increase have criticized the timing of the proposal in addition to individual elements of the spending package.

Greg Moore, a 46-year-old volunteer with the advocacy group Arkansas Community Organizations and the co-chair of an affiliated opposition campaign committee, said some of the plans are things the city needs and added that he likes the early-childhood education component.

"I just think this is the wrong time to do it," Moore said by phone Monday. He argued that "the plans aren't very spelled out, and I would love to see the mayor try to look into avenues to raise money that didn't rest so much on working families."

Moore said he and others have placed about 10,000 door hangers during the campaign against the tax increase.

He said people have been receptive to the pitch that the city should not raise taxes on groceries and necessities during a pandemic, though Moore said he recently encountered a couple of people who were for the tax.

Moore said the city has not been as clear as it could be about how it is going to spend the money and why. He added that he felt the city has not "reached out to working families to find out what they might really want."

The sales-tax referendum is the first of three tax issues set to go before Little Rock voters this season.

The second special election on Nov. 2 will ask voters to authorize an extension to the time frame for the collection of mills for debt service for the Little Rock School District.

The third, on Nov. 9, will ask them to OK a 0.5-mill increase to the property-tax rate in Little Rock that supports the operations and maintenance of the Central Arkansas Library System.

Little Rock's rate for the library system's operations would go up from 3.3 to 3.8 mills.

A millage rate reflects the amount of tax incurred on every $1,000 of the tax-assessed value of a piece of property.