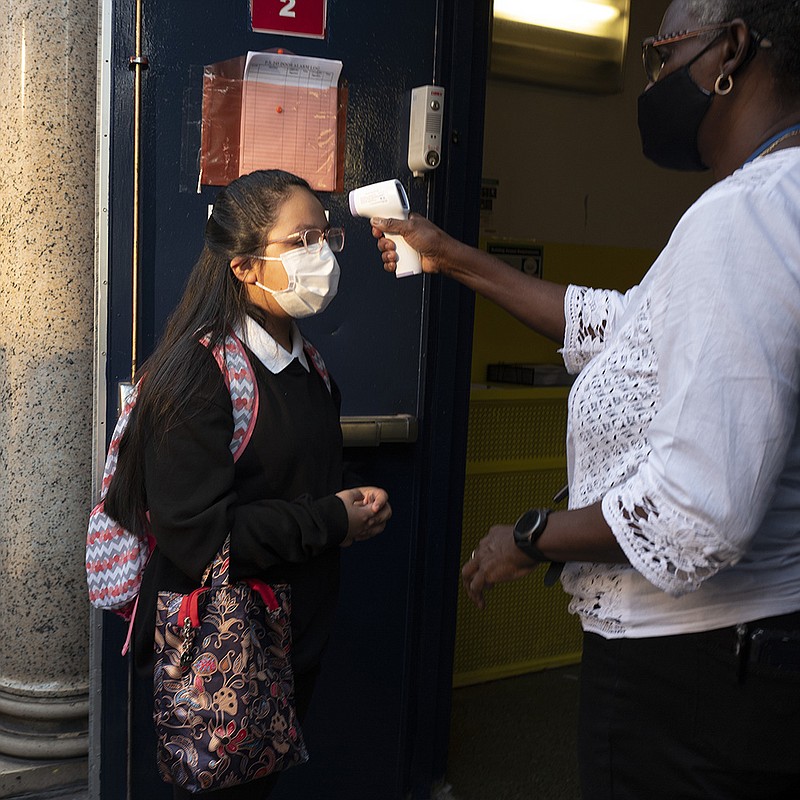 A girl has her temperature checked as she arrives for the first day of school at Brooklyn's PS 245 elementary school, Monday, Sept. 13, 2021, in New York. Classroom doors are swinging open for about a million New York City public school students in the nation's largest experiment of in-person learning during the coronavirus pandemic. (AP Photo/Mark Lennihan)

WASHINGTON -- Two departing Food and Drug Administration regulators argued in a review published Monday that none of the data on coronavirus vaccines so far provided credible evidence in support of booster shots for the general population. Their assertion revealed significant disagreement between career scientists at the agency and top Biden health officials, who have already started planning a broad booster campaign for this fall.

The experts reviewed studies of the vaccines' performance and concluded the shots are working well despite the extra-contagious delta variant, especially against severe disease.

"Even in populations with fairly high vaccination rates, the unvaccinated are still the major drivers of transmission" at this stage of the pandemic, they concluded.

The opinion piece, published in The Lancet, was written by an international group of vaccine experts including Dr. Philip Krause and Marion Gruber, longtime FDA scientists who recently announced that they would leave the agency.

It comes days before an advisory committee is to publicly discuss and vote on whether the FDA should approve additional doses of Pfizer-BioNTech's vaccine for people ages 16 and up and illustrates the intense scientific debate about who needs booster doses and when, a decision the U.S. and other countries are grappling with.

[Video not showing up above? Click here to watch » https://www.youtube.com/watch?v=ssfIbJ7dPyg]

Krause and Gruber, who lead the FDA's vaccine office and have regulated vaccines for decades, were not writing on behalf of the agency; the article stated that "opinions expressed are those of the authors, and do not necessarily represent the opinions of their respective organizations." Still, the arguments they put forth suggested that regulators might raise objections to Pfizer's application for approval of a booster dose at the advisory panel meeting, scheduled for Friday.

"We are in the middle of a deliberative process of reviewing Pfizer's booster shot supplemental approval submission, and FDA as a matter of practice does not comment on pending matters before the agency," the FDA statement continued.

Gruber and Krause were said to have disagreed with the Biden administration's push for boosters before federal scientists could review all the evidence and make recommendations, a conflict that factored into their decisions to depart this fall. The two are likely to be crucial to any decisions the agency makes about boosters; Gruber would be expected to formally sign off on them.

But other top FDA officials, including Dr. Janet Woodcock, the acting agency commissioner, and Dr. Peter Marks, a career regulator who oversees the vaccine office that Gruber and Krause lead, could overrule them.

The publication of the Lancet article raised questions about whether Woodcock, who signed on to the Biden administration's booster announcement last month, had consulted Gruber or other career experts in the FDA vaccine office before advising the administration and making clear her own position on the issue. Some public health experts said Woodcock's endorsement of the plan boxed in her regulators.

President Joe Biden has promised to "follow the science" in his response to the pandemic. But the review raises the question of whether his administration is moving faster than the experts.

In the U.S., the White House has begun planning for boosters later this month, if both the FDA and Centers for Disease Control and Prevention agree.

But many scientists have opposed the plan, saying the vaccines continue to be powerfully protective against severe illness and hospitalization.

The authors of the Lancet article included a compendium of dozens of studies from around the world that shows such a trend.

Georgetown University's Larry Gostin said the paper "throws gasoline on the fire" in the debate about whether most Americans truly need boosters and whether the White House got ahead of scientists.

"It's always a fundamental error of process to make a scientific announcement before the public health agencies have acted, and that's exactly what happened here," said Gostin, a lawyer and public health specialist.

Federal health officials have said that one reason they announced the booster plan was to stay ahead of the virus and be ready for when vaccines may no longer protect as well against severe cases of covid-19.

Those officials, including Dr. Anthony Fauci, Biden's chief medical adviser, have relied heavily on data presented to them by Israeli officials, who have defended that country's early, aggressive booster campaign.

Their data, Fauci and other administration officials have said, show a clear waning of immunity against infection, with enhanced protection from booster doses, but show only hints of waning immunity against hospitalization in people under 65.

But the authors were largely dismissive of the Israeli data and other studies that some health officials have said make the case for imminent extra shots.

They said some Israeli evidence was collected just a week or so after the third dose and might not hold up over time, and that "a very short-term protective effect would not necessarily imply worthwhile long-term benefit."

The FDA did not respond to requests for comment Monday morning.

The review authors did, however, say that extra shots might be useful for some people with weak immune systems -- a step the FDA already authorized.

For the general population, the debate is boiling down to whether boosters should be given even though the vaccines are still offering high protection against severe disease -- possibly in hopes of blocking milder "breakthrough" infections among the fully vaccinated.

Still, government scientists are also weighing hints that protection is waning among older adults who were vaccinated early last winter.

The writers of Monday's commentary reported reviewing worldwide studies since delta began surging, mostly of U.S. and European vaccines. The team concluded "none of these studies has provided credible evidence of substantially declining protection against severe disease."

The more the virus spreads, the more opportunity it has to evolve into strains that could escape current vaccines.

The Lancet reviewers suggest there could be bigger gains from creating booster doses that better match circulating variants, much like flu vaccine is regularly updated, than from just giving extra doses of the original vaccine.

"There is an opportunity now to study variant-based boosters before there is widespread need for them," the scientists wrote.

The authors also said that whatever advantage the shots might provide would not outweigh the benefit of using them to protect the billions of people who remain unvaccinated worldwide.

The World Health Organization has asked wealthy countries to hold off on administering extra shots to healthy patients until at least the end of the year as a way of enabling every country to vaccinate at least 40% of its population.

In an interview Monday, David Nabarro, a WHO envoy, stressed that vaccine-resistant covid-19 strains are increasingly likely with vast parts of the world unprotected, and reiterated WHO's call for rich countries to hold back on booster doses until others catch up.

"Variants that can beat the protection offered by vaccines are bound to emerge all over the world in the coming months and years," Nabarro said. "This is an ongoing battle, and we need to work together."

Nabarro issued the warning as some countries such as the U.K. prepare to give an extra dose to people already vaccinated. With thousands of covid deaths occurring each day 20 months into the pandemic, health advocates are urging governments and manufacturers to take action to narrow a glaring gap in access to shots.

Nabarro called for prioritizing global needs over national agendas. Rich countries could use up all the manufacturing capacity for their booster programs, leaving minimal supplies for the rest of the planet, he said.

The WHO has said that while in most instances the variants of concern lead to a reduction in vaccine effectiveness of varying degrees, the shots mostly retain their ability to protect against severe disease. Nabarro said he worries about the threat rising as the virus continues to spread.

"This world is struggling with a dangerous virus that is constantly evolving and new variants are emerging, and there will be more," he said. "I think this virus is most definitely here to stay for the foreseeable future."

Information for this article was contributed by Lauran Neergaard and Matthew Perrone of The Associated Press; by Noah Weiland and Apoorva Mandavilli of The New York Times; by Ben Guarino and Laurie McGinley of The Washington Post and by James Paton of Bloomberg News (WPNS).