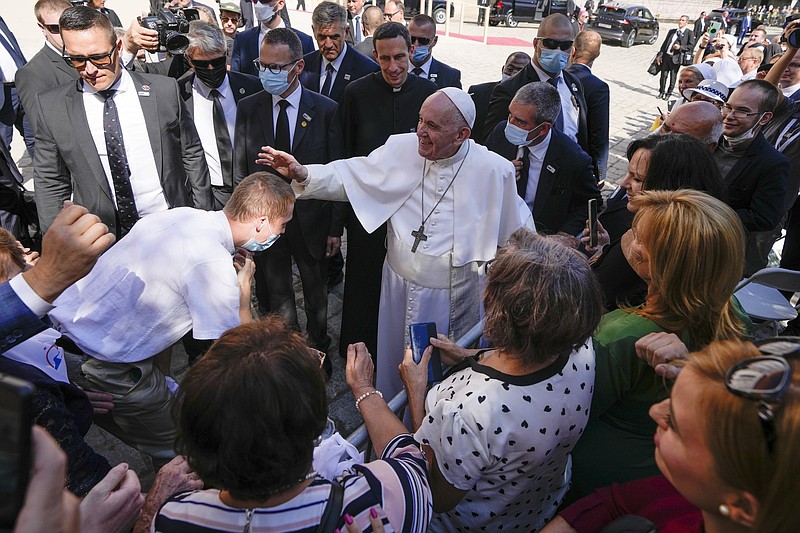 Pope Francis blesses an unidentified man as he greets the crowd while leaving the Cathedral of Saint Martin, in Bratislava, Slovakia, Monday, Sept. 13, 2021. Francis is on a four-day visit to Central Europe, in Hungary and Slovakia, in his first big international outing since undergoing intestinal surgery in July. (AP Photo/Petr David Josek)

BRATISLAVA, Slovakia -- Pope Francis honored Slovakian Holocaust victims and atoned for Christian complicity in wartime crimes as he sought to promote reconciliation Monday in a country where a Catholic priest was president of a Nazi puppet state that deported tens of thousands of its Jews.

"Your history is our history, your sufferings are our sufferings," Francis told members of Slovakia's small, remaining Jewish community, standing in the shadow of the country's Holocaust memorial.

Even though St. John Paul II made three trips to Slovakia, he never met with the country's Jews, evidence of the strained local Catholic-Jewish relations that endured in the post-war decades even with a Polish pope known for his outreach to Jews.

As a result, Francis' welcome by the community -- during the solemn 10-day period of repentance stretching from Rosh Hashana to Yom Kippur -- was a significant step forward and was hailed as historic by local Jewish leaders who said it was chance to look to the future.

[Video not showing up above? Click here to watch » https://www.youtube.com/watch?v=bLStghR7DDc]

Francis is on the second day of a four-day pilgrimage to Hungary and Slovakia, his first big international outing since undergoing intestinal surgery in July. The 84-year-old pope has appeared in good form, walking around to greet well-wishers and clearly enjoying the enthusiasm of Slovaks after being cooped up in the Vatican for over a year of coronavirus lockdowns.

He was solemn on Monday afternoon, listening intently via headphones providing simultaneous translation as he heard testimony from a Holocaust survivor about the horrors of the Shoah and the enduring pain of the Jewish community.

"Let us unite in condemning all violence and every form of antisemitism, and in working to ensure that God's image, present in the humanity he created, will never be profaned," Francis said.

Slovakia declared its independence from Czechoslovakia in 1939 and became a Nazi puppet state with politician and Roman Catholic priest Jozef Tiso becoming the country's president.

Under his rule, the country adopted strict anti-Jewish laws and deported around 75,000 Jews to Nazi death camps where about 68,000 perished.

Tiso was sentenced to death and hanged in 1947, and over the years scholars have unearthed archives showing that the Vatican under Pope Pius XII didn't approve of Tiso's policies and intervened to halt the deportation of Slovak Jews in 1942, though they resumed two years later after Nazi troops entered Slovakia at Tiso's request.

Now, only about 5,000 Jews live in Slovakia, a largely Roman Catholic country of 5.5 million currently ruled by a four-party center-right coalition government.

Slovakia's Catholic bishops over the years have expressed regret for the church's wartime failings and asked forgiveness from the Jewish community, but an official process of dialogue only began after Slovak representatives from both faiths met with Francis at the Vatican in 2017.

The head of the umbrella group of Slovakian Jewish communities, Richard Duda, said at the encounter that Francis' visit was "historic," and a "turning point" in relations, and that dialogue was the only way to achieve peaceful coexistence.

"We hope that the sincerity and availability for an open dialogue will allow us to one day put a final point even on the dark sides of the complicity which, during the terrible world war 80 years ago, marked relations between the people of this land," he said.

A Holocaust survivor, Tomas Lang, cited a Vatican embassy official at the time, Monsignor Giuseppe Burzio, as someone who "unceasingly tried to halt the antisemitism of the murderous regime of the time."

The site of Francis' encounter was significant: Bratislava's Holocaust memorial stands on the site of a synagogue that was destroyed in 1969 by the communist regime to make room for a bridge. The synagogue had stood next to the city's cathedral, and Francis said their proximity showed that Catholics and Jews had long lived in peaceful coexistence "and a striking sign of unity in the name of the God of our fathers."

"Here, in this place, the name of God was dishonored, for the worst form of blasphemy is to exploit it for our own purposes, refusing to respect and love others," he said.

"In this place, our histories meet once more. Here let us affirm together before God our willingness to persevere on the path of rapprochement and friendship," Francis said.