Remote learning no easy solution for some nations 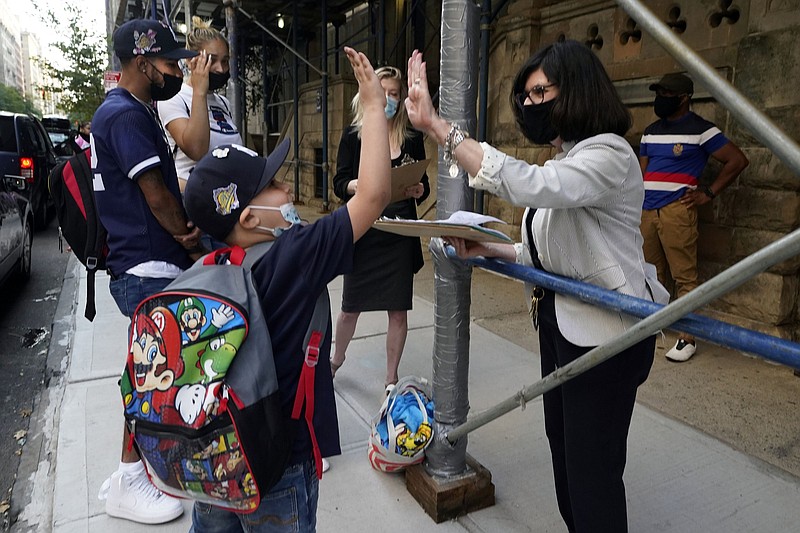 Wilfredo Padilla Jr., 7, a second-grader at PS811 in New York, gets a high-five from Alternative Assessment Coordinator Patricia Valentino, as he arrives for the first day of school, Monday, Sept. 13, 2021. School started Monday for about a million New York City public school students in the nation's largest experiment of in-person learning during the coronavirus pandemic. (AP Photo/Richard Drew)

Students across much of the world are trading in Zoom windows for chalkboards, in a global moment of hope and apprehension. In some places, including parts of the United States, many school doors shut for a year and a half have swung open, even amid resurgent coronavirus outbreaks.

Many of the countries that have seen the longest pauses in classroom education were among those least equipped to transition to remote learning. Students are facing dire consequences, teachers say.

Monday, students across the Philippines began class, once again remote, in their third school year marred by the pandemic.

For many teachers, the situation seems desperate, said Raymond Basilio, the secretary general of the Alliance of Concerned Teachers, a large organization of education workers in the Philippines.

Of the nation's approximately 27 million students, only around 14% participated in online schooling last fall, according to a survey conducted in November 2020.

More than three-fourths -- including nearly all rural students -- enrolled in a modular system: Every two weeks students or guardians must pick up their "modules," stapled packets of worksheets, and return filled-out copies to their teachers.

Families with resources, Basilio said, are more likely to have the means and wherewithal to buy sufficient Internet access and enroll their children in online school. They can also hire tutors to help their children keep up with unsupervised lessons.

"That story is not the story for students who are the children of farmworkers, children of fisherfolk or urban poor workers," he said. In the Philippines, more than 17 million people live below the poverty line, according to the Asian Development Bank.

By some accounts, the modules are haphazard and difficult to understand, and schools came under criticism early in the pandemic for glaring mathematical and grammatical errors, and bizarre questions and prompts.

"We're very worried about our future," Basilio said. "High school teachers will be in a very problematic scenario. How will they teach higher order thinking skills if their students are not able to read, to write?"

In Venezuela, which along with the Philippines closed schools nationally early in the pandemic and is set to keep them that way, remote learning resumes this week.

Wuisneidys Delgado, a biology teacher in the small town of Aragua de Barcelona, has been teaching on video calls and WhatsApp. Not only do some students lack Internet or computer access -- but some teachers don't have smartphones either, she said.

Some Venezuelan teachers have been setting up informal, in-person classrooms in their homes as a last resort, news agency EFE reported. But experts are concerned that students have lost much of their opportunity to learn.

Globally, in-person learning has made a comeback since last year, said Borhene Chakroun, the director for policies and lifelong learning systems at the U.N. Educational, Scientific and Cultural Organization. In 119 countries, students are attending school in person, up from 95 in September 2020.

Some 8% of the world's students are facing full school closures -- down from 41% at this time last year. The UNESCO closure data does not include "partial reopening," which could mean a few schools in a country are open.

Some countries, such as Saudi Arabia and Zimbabwe, have closed schools for certain age groups and grade levels, Chakroun said. Some are open with reduced in-person class time, such as in the Bahamas and Ecuador. In some countries, such as Indonesia, Mexico and the U.S., school status varies across state and regional lines.

The World Bank, the United Nations Children's Fund and UNESCO launched Mission Recovering Education 2021 to urge governments to bring all students back to school for complete or partial in-person instruction before the end of 2021, arguing that the cost to students of remote learning outweighs the covid-19 risks.

Covid infection rates remain high globally, but the coalition says that schools can reopen with precautions "even when community transmission hasn't been completely contained and vaccination coverage is low," citing lower transmission rates and levels of covid severity for children, and the adoption of safety measures.

Robert Jenkins, global director of education for UNICEF, said the sheer magnitude and duration of the disruption is unparalleled, with 1.6 billion schoolchildren affected at the pandemic's peak and some students facing school closures for more than 76 weeks.

Even amid the cyclones, floods and conflicts to which the agency has had to respond, "it would be almost unheard of for children to be out of school for such a long period," he said, and the poor and marginalized have paid the steepest price.

For Rumena Afroza -- a high school English teacher at a small, rural school in central Bangladesh, one of the countries to close schools nationally for 18 months -- the pause has been devastating.

In March 2020, she made a Facebook messenger group to coordinate remote learning for her students. Of the 188 in her two classes, she was unable to reach more than 20 on Zoom. When she asked students make an appearance, distanced, in person, to hear a lesson plan, only 80 could make it.

"I told my students, 'Don't marry before 18,'" she said, but the pandemic has made waiting difficult for many families with daughters aged 14 to 17. The pandemic has increased the number of girls at risk of becoming child brides by 10 million, according to UNICEF.

Afroza was overjoyed when Bangladesh's education minister announced last week that schools would reopen on Sept. 12.

"Again we will be able to see the school garden full of flowers," she said. "The parents who have become frustrated will dream again for their children in a new way. They will find the light of hope."

Print Headline: Remote learning no easy solution for some nations