Retrial for Gilbert Baker on federal bribery charges set for May 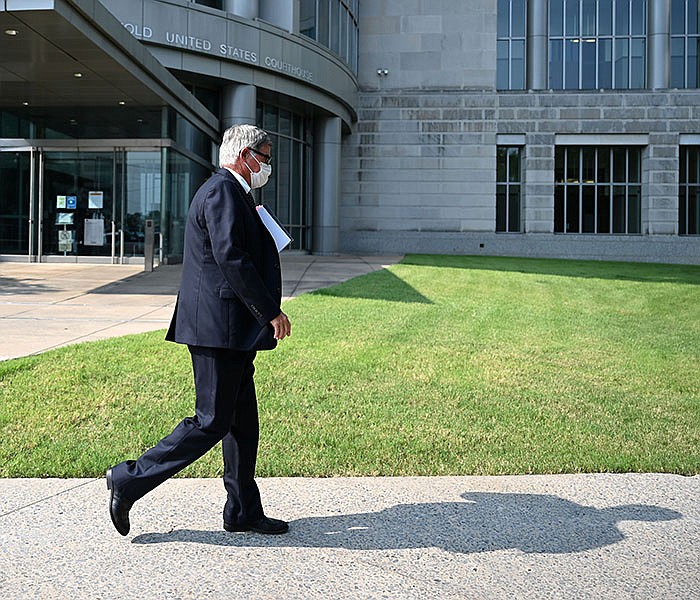 Gilbert Baker leaves the U.S. District Courthouse in Little Rock after the jury convened for the weekend on Friday, Aug. 6, 2021. (Arkansas Democrat-Gazette/Stephen Swofford)

Former Republican state Sen. Gilbert Baker will be retried next year on eight counts related to the conspiracy case that the jury deadlocked on.

Baker was acquitted of conspiracy to bribe a judge to reduce a jury award in a wrongful-death case involving a Greenbrier nursing home owned by Michael Morton of Fort Smith.

Baker, 64, a former political fundraiser and past chairman of the state Republican Party, was accused of acting as a middleman to bribe former Faulkner County Circuit Judge Mike Maggio to reduce a $5.2 million jury award against Greenbrier Nursing and Rehabilitation Center in 2013 in a lawsuit filed by the family of Martha Bull. Bull died two weeks after being admitted for a one-month rehabilitation stint at the center, which is owned by Morton.

Maggio, who pleaded guilty of bribery in 2015 and was sentenced to 10 years in prison in 2018, is set to be released from prison next month after reportedly having his sentence reduced.

The only orders entered in his case since January 2019 have been sealed by U.S. District Judge Brian Miller, who heard the case against Maggio. But, according to the United States Bureau of Prisons, Maggio, who testified during Baker's bribery trial in testimony that was often disjointed and contradictory, is currently housed at a federal facility in Atlanta, Ga.

He is scheduled for release on Oct. 20. The U.S. attorney's office in Little Rock declined to comment on the matter, as did Maggio's attorney, James Hensley of Conway.

"We cannot comment on any proceedings that are under seal," said Allison Bragg, spokeswoman for Acting U.S. Attorney Jonathan Ross.

"I'm going to decline saying anything on the record because I don't want to interfere doing anything with that other court," Hensley said Monday evening.

Morton, who testified against Baker, has not been charged with a crime in the matter. Baker was acquitted on Aug. 12 of conspiracy to commit bribery, but the jury was unable to come to a decision on charges of bribery concerning programs receiving federal funds and seven counts of honest services wire fraud.

Reached by phone on Monday, Blake Hendrix, one of Baker's attorneys, said he will be ready take the case back to a jury in May.

"This is the nature of the business," Hendrix said.