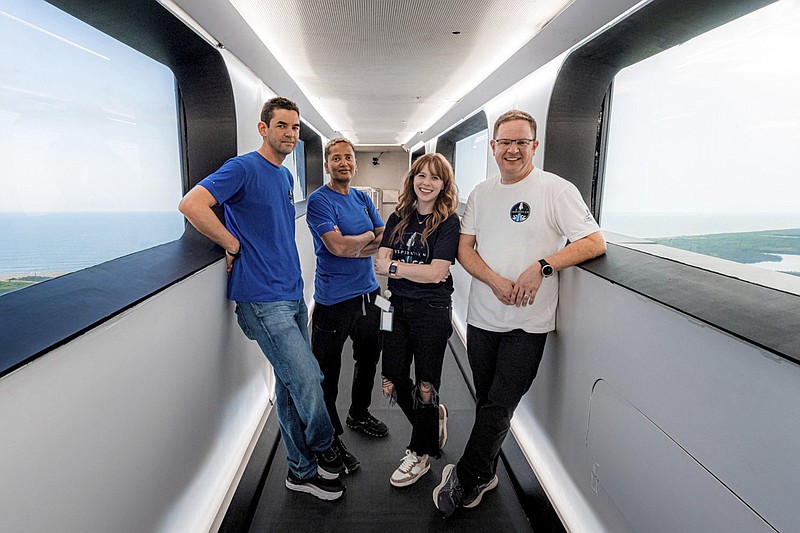 In this July 28, 2021 photo provided by John Kraus, from left, Jared Isaacman, Sian Proctor, Hayley Arceneaux and Chris Sembroski stand in the crew access arm at Launch Complex 39A at Kennedy Space Center in Florida. They will use this arm to board the Falcon 9 rocket on launch day. (John Kraus/Inspiration4 via AP)

The first all-civilian mission on a multiday trip to space looks to launch on Wednesday night from Kennedy Space Center in Merritt Island, Fla.

The Inspiration4 crew, made up of billionaire mission commander Jared Isaacman, pilot Sian Proctor, medical officer Hayley Arceneaux and mission specialist Chris Sembroski, will ride in the SpaceX Crew Dragon Resilience atop a Falcon 9 rocket and blast off from the space center's Launch Pad 39-A. The four completed a full dress rehearsal Sunday for the launch.

The plan for the trip is to orbit the Earth at 335 miles altitude for three days before returning for a splashdown landing off the coast of Florida in either the Atlantic or Gulf of Mexico.

The four civilians will be the first to launch from Florida in SpaceX's Dragon, and second crew to ride in Resilience, which ferried up the Crew-1 astronauts to the International Space Station back in November 2020 before spending six months attached to the space station and returning to Earth this past May.

Instead of going to the space station, the Inspiration4 mission will just remain in low-Earth orbit, giving its crew a fantastic view of space, orbiting at higher altitude than the space station. Since the Crew Dragon won't be docking with anything, SpaceX has replaced that mechanism with a glass cupola window for even better views.

So far, SpaceX has used two Crew Dragons for its three missions with passengers, with the other being Crew Dragon Endeavour, which is currently parked at the space station with the Crew-2 astronauts.

SpaceX plans to quickly refurbish Resilience for a planned Crew-3 mission to launch as early as Oct. 31.

Inspiration4 is the first planned use of Crew Dragon for civilian flights, but future missions call for civilians to fly and spend time on the space station as well, similar to how Russian Soyuz flights took civilians starting in 2001 with Dennis Tito's trip to the station.

The three other passengers were chosen or won their seats as part of the mission's goal of raising funds for the Memphis-based St. Jude Children's Research Hospital, which is known for treating childhood cancer and other life-threatening diseases. Isaacman has donated $100 million to St. Jude and the mission looks to raise a total of $200 million.

It will be the third major landmark in the burgeoning space tourism industry this year, with Virgin Galactic's flight of founder Richard Branson and others aboard its VSS Unity craft and Amazon and Blue Origin founder Jeff Bezos' trip on the New Shepard rocket.

Both those flights were quick trips up to 50 miles for Virgin Galactic and just over 62 miles for Blue Origin, which allow for a short time of weightlessness and views of the curvature of the Earth before heading back for landing.

After the success of Branson's flight, Virgin Galactic disclosed it would charge new customers $450,000 per flight. Blue Origin has yet to announce its price point.

The SpaceX mission is much more complicated and comes with a higher price tag. The company is working with Axiom Space for the first International Space Station mission in 2022, with a price tag of $55 million for each passenger.

SpaceX offers future civilian flights at undisclosed costs for trips to low-Earth orbit, the International Space Station, lunar orbit and Mars -- the latter of which will be reliant on the successful development of Starship.

The first civilian flight to the moon by SpaceX is also already in the works, aiming for a 2023 flight.

Japanese entrepreneur Yusaku Maezawa has bought all the seats on the Starship flight, which will be a weeklong trip to the moon and back. The mission has been dubbed dearMoon, and Maezawa opened up a contest to take along eight passengers.

But first up is Inspiration4, which has had a whirlwind buildup including a commercial played during the 2021 Super Bowl that helped prompt more than 7,200 people to donate to St. Jude and be among those considered for one of the seats. The mission is also the subject of a Netflix documentary series.