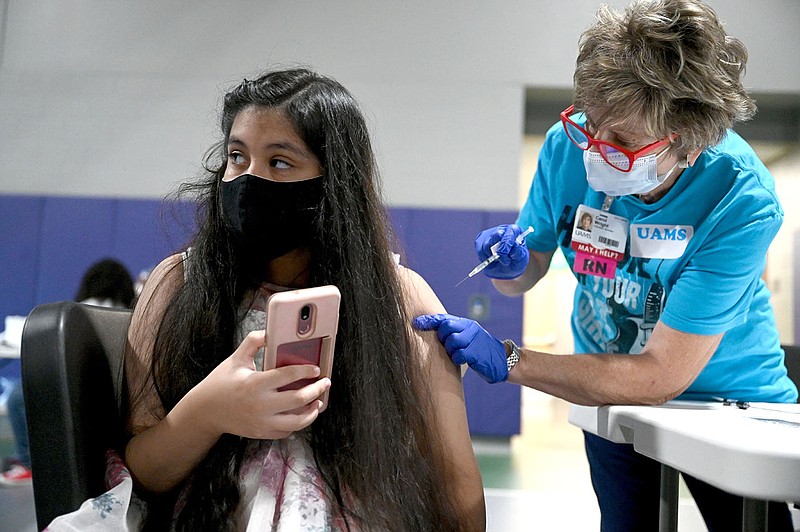 The number of Arkansans 12 years and older fully immunized against covid-19 passed the 50% mark Monday, increasing to a total of 1,281,255, according to state Department of Health data.

Dr. Jennifer Dillaha, the Health Department's chief medical officer, said the milestone is cause for celebration.

"I am very pleased. I was hoping that we would do that sooner than later, but we're here," she said. "I'm hoping that we'll keep on with this progress."

The number of vaccine doses that providers reported having administered, including second doses of the Pfizer and Moderna vaccines, rose by 2,652 to 2,800,432.

Dillaha said Arkansans are choosing to get vaccinated because they're seeking more information and are seeing first-hand the long-term consequences of covid-19.

As of Monday, 15,907 third-vaccine doses had been administered.

There were 48,744 vaccine doses administered in the past seven days, 20,941 less than the previous week, when a total of 69,685 doses were administered.

"We had a downturn since the Labor Day holiday," Dillaha said. "My hope is that this 12% that you see of partially immunized will finish their process and we'll have other people decide to take the vaccine."

Earlier Monday, a different state official announced his disagreement with the idea of a vaccine mandate. President Joe Biden has announced that private employers with at least 100 workers; federal agencies and contractors; and health care workers in Medicaid and Medicare facilities must be vaccinated.

Secretary of State John Thurston announced Monday that he will not require his employees to be vaccinated nor will he require proof of a negative covid-19 test. Visitors to the state Capitol will also not be required to be vaccinated.

"Over the past 18 months, amid the COVID pandemic, my office has worked diligently to provide a safe environment for employees, legislators, and citizens who want to visit our State Capitol," Thurston said in a news release. "Last week we saw, what I would consider being, massive federal overreach by the Biden administration in mandating vaccinations. This comes despite his statement in December that vaccines shouldn't be mandated. I am a strong believer in personal freedoms and that each individual has the right to their own health decisions."

Meanwhile, the number of coronavirus cases increased by 646, a dip of 470 from Sunday and 291 less than reported the previous Monday.

Arkansas' death toll from the virus, as tracked by the Department of Health, rose by 31, to 7,298. About 87.8% of deaths since Feb. 1 were unvaccinated, according to Health Department data.

"Today's covid report shows better case numbers than last week as well as a continued decrease in hospitalizations," Gov. Asa Hutchinson said Monday afternoon in his daily covid numbers social media post. "The 31 deaths reported include 12 delayed reports. This is yet another reminder of the importance of getting the vaccine."

The number of hospitalized covid-19 patients fell by five to 1,113. The number in intensive care units dropped by 19 to 443.

According to the Health Department data, 90.4% of those hospitalized since Feb. 1 are unvaccinated.

The number of patients on ventilators fell by one to 286.

"That's encouraging because we need some relief off of the stress of our healthcare providers," Dillaha said. "The number of people in the hospital and on the vent with covid-19 is still very high."

Case numbers are typically lower on Mondays because fewer people get tested over the weekend, Dillaha has said.

"What we saw the last few weeks was the leveling off or even a turning down of the numbers of new and active cases. It's hard for us to know at this point and time whether it will be sustained," Dillaha said.

While the lower case totals are hopeful, Dillaha said she still has concerns with the increase in fall activities, such as the return to school and colleges as well as sports and large gatherings.

"We may see it return to an increase in the number of cases from day to day," she said.

Communities around the state need to ensure they are doing everything they can to suppress the spread of the more transmissible delta variant, Dillaha said.

"Last fall, we were seeing an increase of cases that peaked in January. At this point in time, we're coming off of a peak in August. It's not clear yet whether we will have another peak in winter," she said. "This is something we are all very concerned about because it is likely we will also have an increase in transmission of influenza this year."

To date, there have been 88,020 covid-19 cases in patients from newborn to 18 years old, according to a new data set provided by the Health Department on its dashboard.

Of that number, 808 required hospitalization, and 105 were admitted to the ICU.

About 97% of those cases in patients between 12-18 years old were unvaccinated.

There are about 12.3% of those patients between 12-18 years old that are partially vaccinated while 34.7% are fully vaccinated.

On Monday, there were 5,398 current active cases among patients from newborn to 18 years old.

There was no data on the number of pediatric patients who required ventilator intervention.

Hope School District on Monday announced that three campuses would shift to virtual learning for the rest of the week.

"We are basing this decision on the increased number of quarantined students at Clinton Primary, Beryl Henry Elementary and the Hope Academy of Public Service," the district in southwest Arkansas stated on its website. Based on last year's enrollment data, the schools together enroll roughly 1,300 students in kindergarten through 8th grade.

Face-to-face instruction is expected to resume Monday, the district announced.

Statewide active cases of covid-19 fell to 3,517 on Monday, down about 7.5% from 3,804 cases Thursday, according to Health Department reports.

The Health Department releases covid-19 reports twice each week that list active infections among students and staff, as well as cumulative case totals since Aug. 1 Classes began for most students the week of Aug. 16.

Last week, cases fell by more than 20% despite concerns voiced by health experts that infections might increase after Labor Day, a holiday known for travel activities.

While cases have dipped, they remain above highs seen last winter, when there were more than 3,330 active cases in early January.

Cumulative cases among students and staff were 14,736 as of Monday. The total includes 10,666 student cases and 1,684 staff cases. Some cases in the cumulative total are not identified as either student or staff infections.

The Cabot School District topped all others with 101 active cases as of Monday, but the total declined from 130 active cases listed in Thursday's Health Department report.

The Monday report listed case totals for colleges statewide, with those numbers declining to 512 on Monday, a dip of about 13% from 577 cases Thursday, according to Health Department data.

The University of Arkansas, Fayetteville topped all colleges with 137 active cases, down from 176 active cases Thursday, according to Health Department reports.

Cases have been on the rise at Harding University, a private Christian university in Searcy, according to Health Department data.

Active covid-19 infections increased to 61 as of Monday, up from 46 cases listed in Thursday's report.

Harding University, the state's largest private university with more than 4,900 students, has an on-campus covid-19 vaccination clinic set for Wednesday, according to its website.

The Health Department totals differ from those reported by individual campuses.

UA-Fayetteville on its website Monday listed 78 active cases of covid-19, including 70 students.

Total hospital beds in the state -- whether filled or vacant -- rose by 23, going from 8,833 on Sunday to 8,856 on Monday, according to Health Department data.

The total of intensive care beds, filled or vacant, increased by six to 1,154. Forty ICU beds were available Monday, which means that more than 96.5% of the special-care beds were full.

The number is significantly lower than normally reported, going from 9,819 on Sunday and from 6,836 reported Sept. 6.

Since the beginning of the pandemic, there have been a total of 4,748,684 tests reported. Of that number, 496,775 were positive for covid-19, according to Health Department data.

According to a Health Department report released Monday, the number of cases in Arkansas found to have been caused by the delta variant, which first emerged in India, rose by 704, from 4,185 on Sept. 7 to 4,889 on Monday.

The number known to have been caused by the alpha variant from the United Kingdom rose by two, to 771.

The Health Department also reported an increase from 58 to 59 in the number of cases found to have been caused by the gamma variant from Brazil.

Health Department data indicated that Pulaski County had the largest increase in total cases, with the count rising by 62.

Craighead County had the next-largest increase, 59, followed by Benton County with 40.