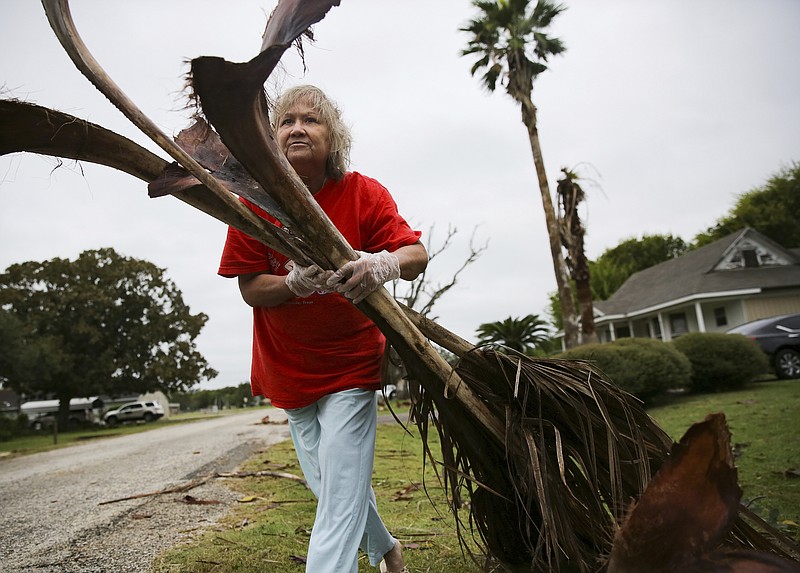 Alfa Alamia cleans up her brother's yard in Palacios, Texas following Hurricane Nicholas on Tuesday, Sept. 14, 2021. Alamia has lived in Palacios since she was 12. (Elizabeth Conley/Houston Chronicle via AP)

SURFSIDE BEACH, Texas -- Tropical Storm Nicholas slowed to a crawl over the Houston area Tuesday after making landfall earlier as a hurricane, knocking out power to a half-million homes and businesses and dumping more than a foot of rain along the same area swamped by Hurricane Harvey in 2017.

Nicholas could potentially stall over storm-battered Louisiana and bring life-threatening floods across the Deep South over the coming days, forecasters said.

Nicholas made landfall early Tuesday on the eastern part of the Matagorda Peninsula and was soon downgraded to a tropical storm. It was about 10 miles southeast of Houston, with maximum winds of 45 mph as of 10 a.m. CDT Tuesday, according to the National Hurricane Center in Miami.

In the small coastal town of Surfside Beach about 65 miles south of Houston, Kirk Klaus, 59, and his wife Monica Klaus, 62, rode out the storm in their two-bedroom home, which sits about 6 to 8 feet above the ground on stilts.

He said it rained all day on Monday and, as the night progressed, the rainfall and winds got worse.

Sometime around 2:30 a.m. Tuesday, the strong winds blew out two of his home's windows, letting in rain and forcing the couple to continually mop their floors. Klaus said the rainfall and winds created a storm surge of about 2 feet in front of his home.

"It looked like a river out here," he said.

Nicholas is moving so slowly it will dump several inches of rain as it crawls over Texas and southern Louisiana, meteorologists said. This includes areas already struck by Hurricane Ida and devastated last year by Hurricane Laura. Parts of Louisiana are saturated with nowhere for the extra water to go, so it will flood, said University of Miami hurricane researcher Brian McNoldy.

"It's stuck in a weak steering environment," McNoldy said Tuesday. So while the storm itself may weaken "that won't stop the rain from happening. Whether it's a tropical storm, tropical depression or post-tropical blob, it'll still rain a lot and that's not really good for that area."

The storm was moving north-northeast at 6 mph, and the center of Nicholas was expected to move slowly over southeastern Texas on Tuesday and over southwestern Louisiana on Wednesday.

Nicholas, expected to weaken into a tropical depression by Tuesday night, could dump up to 20 inches of rain in parts of southern Louisiana. Forecasters said southern Mississippi, southern Alabama and the western Florida Panhandle could see heavy rainfall as well.

Much of Texas' coastline was under a tropical storm warning that included potential flash floods and urban flooding. Texas Gov. Greg Abbott said authorities placed rescue teams and resources in the Houston area and along the coast.

"Right before it made landfall, it abruptly intensified into a hurricane and as it moved inland, the pressures began to rise with it. The winds have relaxed slightly and now we're getting down into tropical storm force (winds)," he said.

More than a half-million homes and businesses had lost power in Texas, but that number dropped to about 455,000 by late morning Tuesday, according to the website poweroutage.us that tracks utility reports.

A tornado or two may be possible Tuesday along the upper Texas and southwest Louisiana coast, according to the weather service.

Nicholas brought rain to the same area of Texas that was hit hard by Harvey, which was blamed for at least 68 deaths, including 36 in the Houston area. After Harvey, voters approved the issuance of $2.5 billion in bonds to fund flood-control projects, including the widening of bayous. The 181 projects designed to mitigate damage from future storms are at different stages of completion.

"It's not crazy amounts of rain. It isn't anything like Hurricane Harvey kind of thing with feet of rain," McNoldy said. Harvey not only stalled for three days over the same area, it moved a bit back into the Gulf of Mexico, allowing it to recharge with more water. Nicholas won't do that, McNoldy said.

Louisiana Gov. John Bel Edwards declared a state of emergency Sunday night, ahead of the storm's arrival in a state.

On Monday, Misty Tran dreaded the thought of Nicholas reaching as far east as her home south of New Orleans in Empire, Louisiana. Ida damaged the roof of Tran's mobile home. A tarp covers the roof now, Tran said, but it wouldn't be a match for even a weak storm.

"A tarp can only do so much," said Tran, helping clean up at a marina where she works.

The storm was expected to bring the heaviest rainfall west of where Ida slammed into Louisiana two weeks ago. Ida has been blamed for 86 deaths throughout the United States. Across Louisiana, about 94,000 customers remained without power Tuesday morning, according to poweroutage.us. 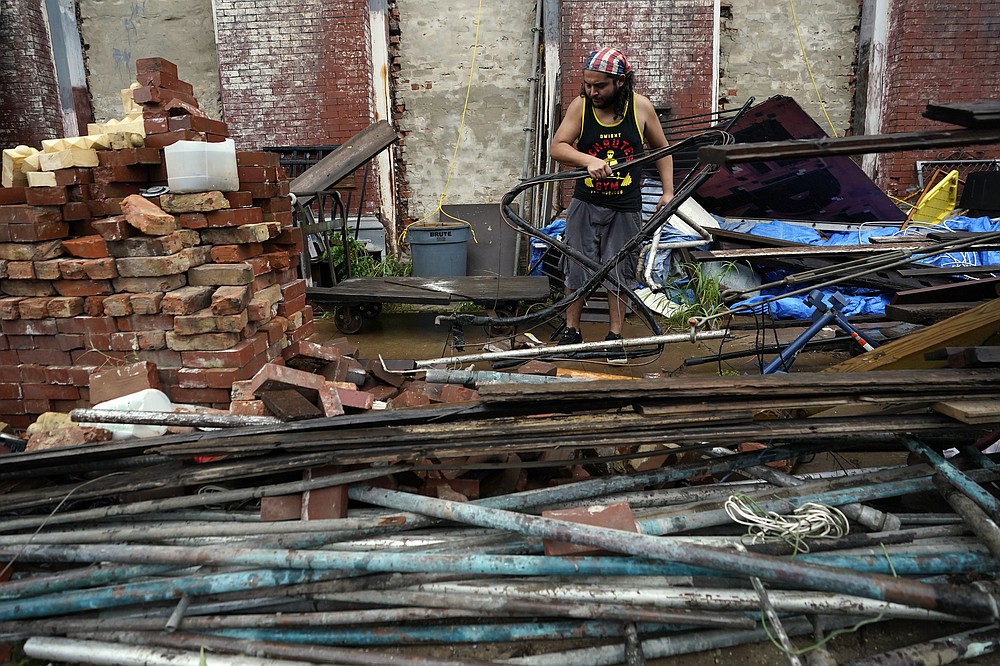 Adrian Bentancourt cleans up debris from a fence that was blow down by Hurricane Nicholas Tuesday, Sept. 14, 2021, in Galveston, Texas. (AP Photo/David J. Phillip) 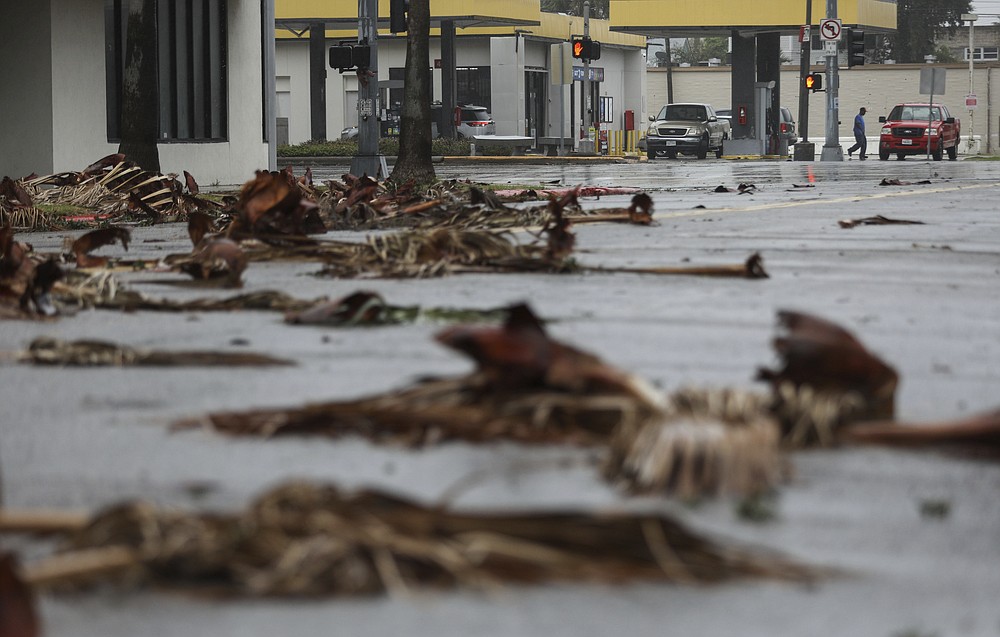 People get gas the morning after Hurricane Nicholas made landfall along the coast, Tuesday, Sept. 14, 2021, in Galveston, Texas. (Jon Shapley/Houston Chronicle via AP) 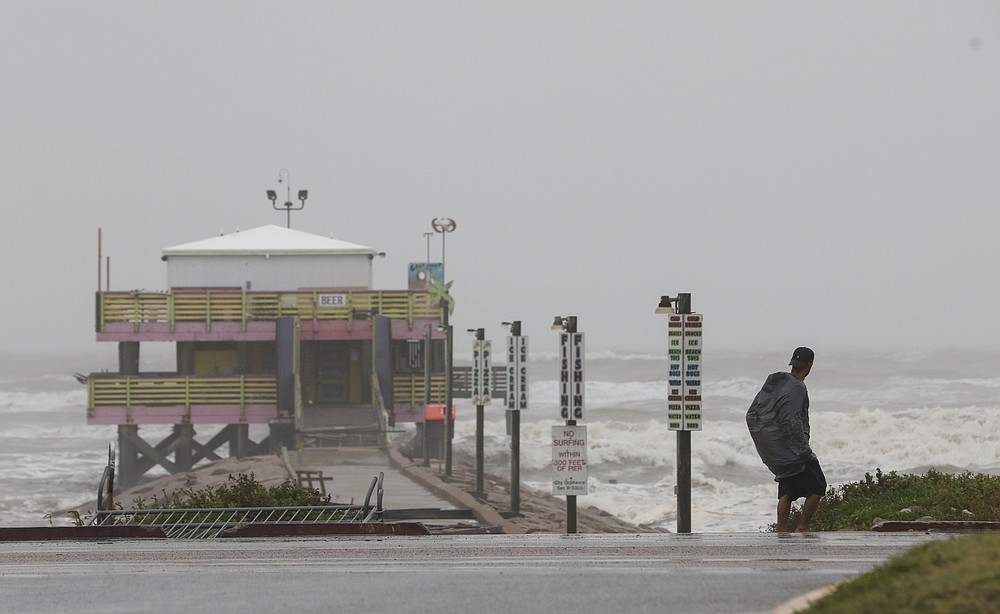 A man walks down Seawall Boulevard near 61st Street on Tuesday, Sept. 14, 2021, in Galveston, Texas. Hurricane Nicholas made landfall early in the morning along the coast. (Jon Shapley/Houston Chronicle via AP) 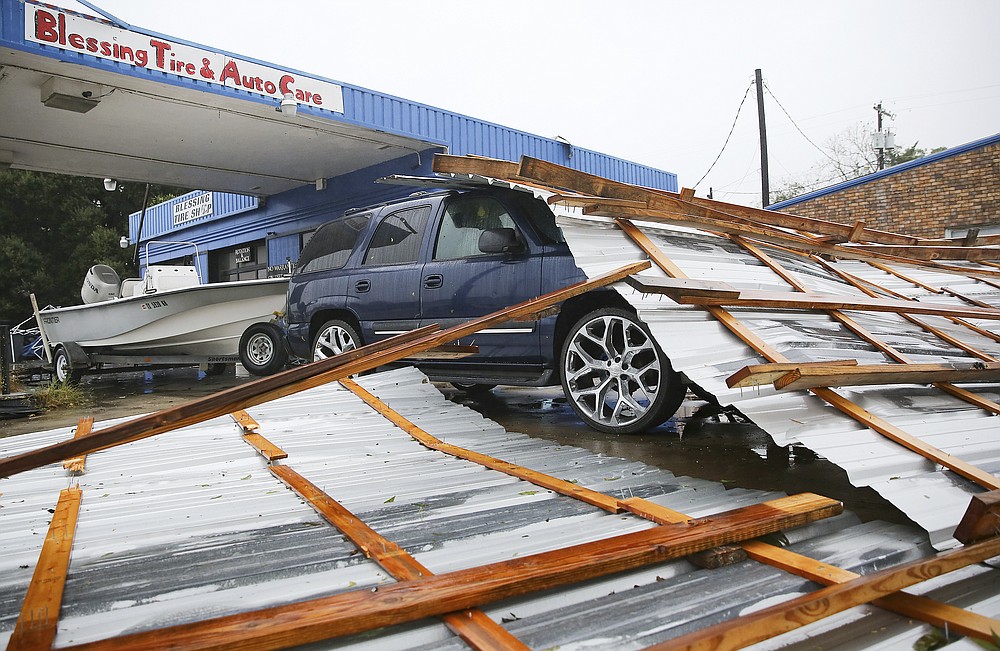 Parts of a roof sit on top of a car parked at Blessings Tire and Auto Care following Hurricane Nicholas in Bay City, Texas on Tuesday, Sept. 14, 2021. According to the owner of the business, he wasn't sure where the roof came from. (Elizabeth Conley/Houston Chronicle via AP) 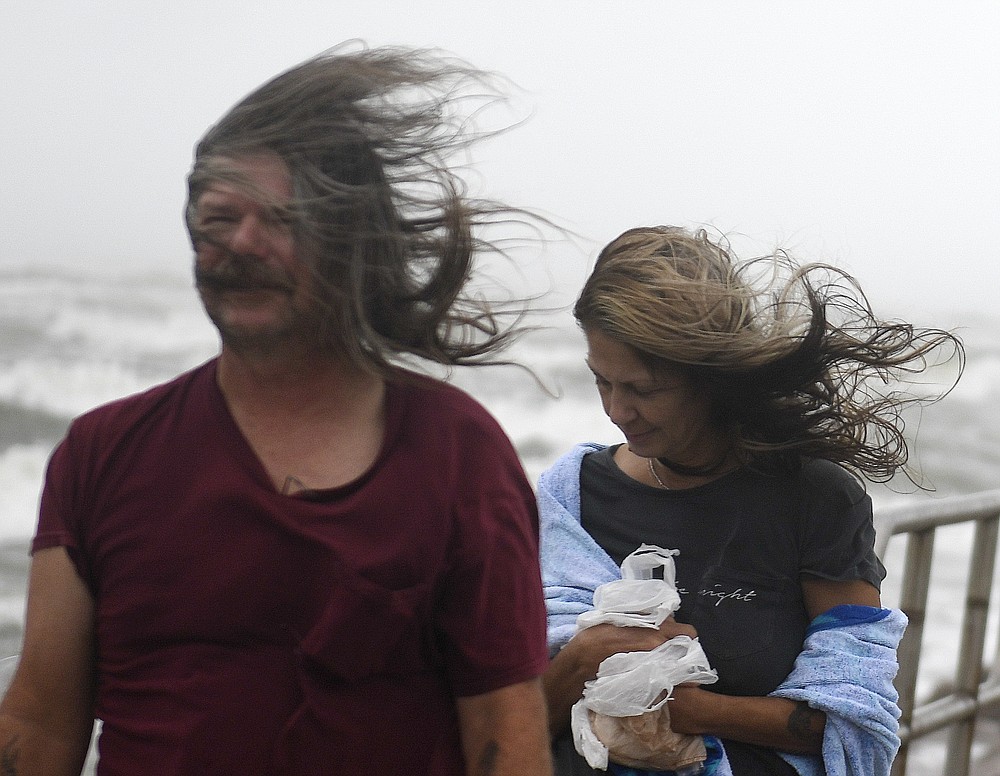 People's hair blows in the wind ahead of Tropical Storm Nicholas, Monday, Sept. 13, 2021, on the North Packery Channel Jetty in Corpus Christi, Texas. Winds are expected to be as high as 60 mph, according to the National Weather Service. (Annie Rice/Corpus Christi Caller-Times via AP) 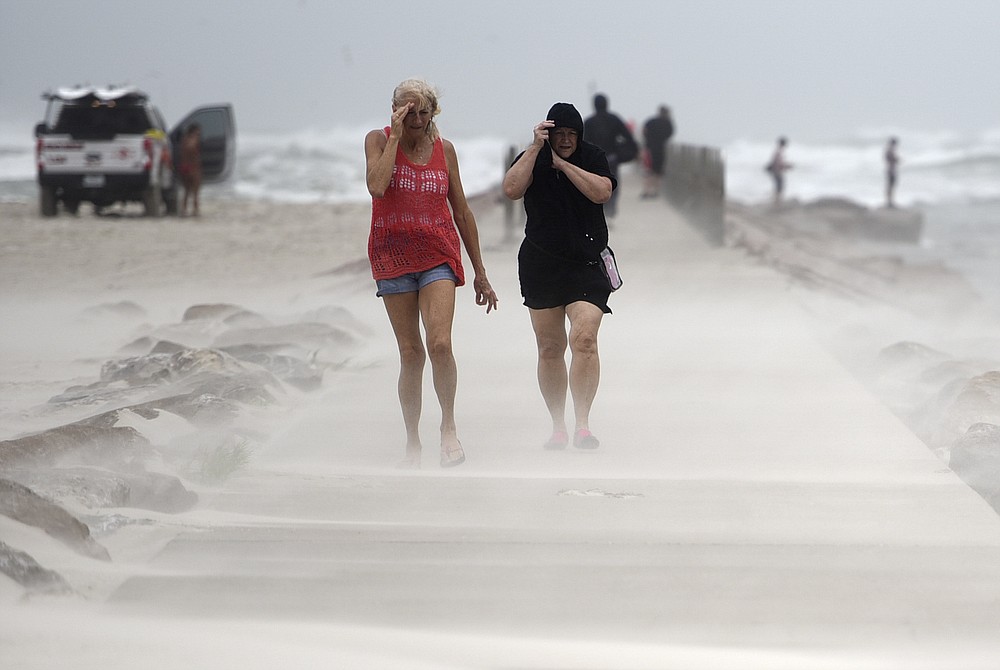 People shield their faces from wind and sand ahead of Tropical Storm Nicholas, Monday, Sept. 13, 2021, on the North Packery Channel Jetty in Corpus Christi, Texas. Lifeguards paroled the beach to warn people of the upcoming conditions. (Annie Rice/Corpus Christi Caller-Times via AP) 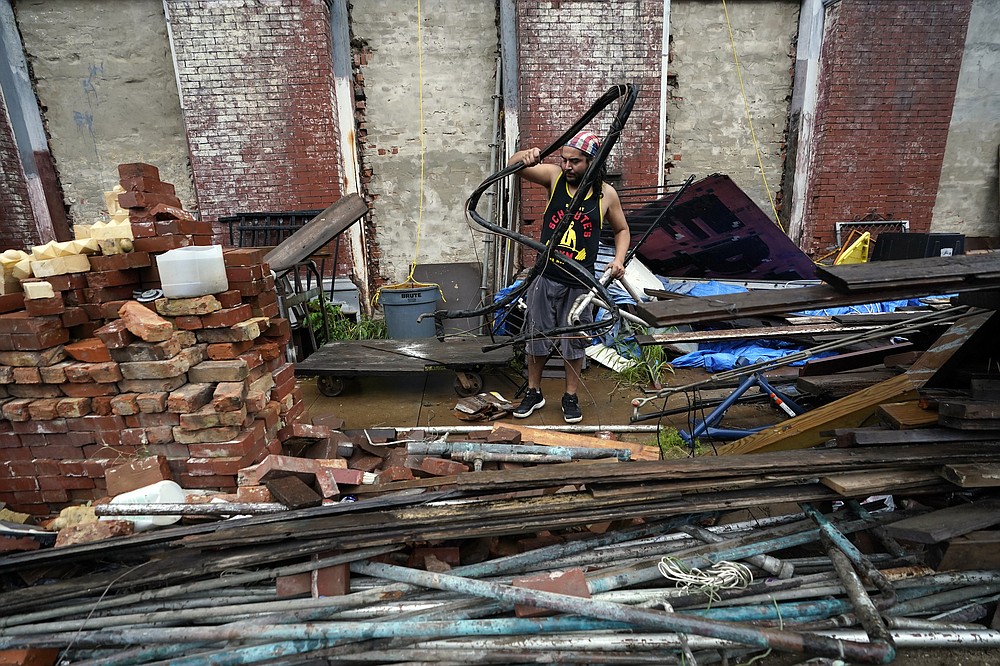 Adrian Bentancourt cleans up debris from a fence that was blown down by Hurricane Nicholas Tuesday, Sept. 14, 2021, in Galveston, Texas. (AP Photo/David J. Phillip) 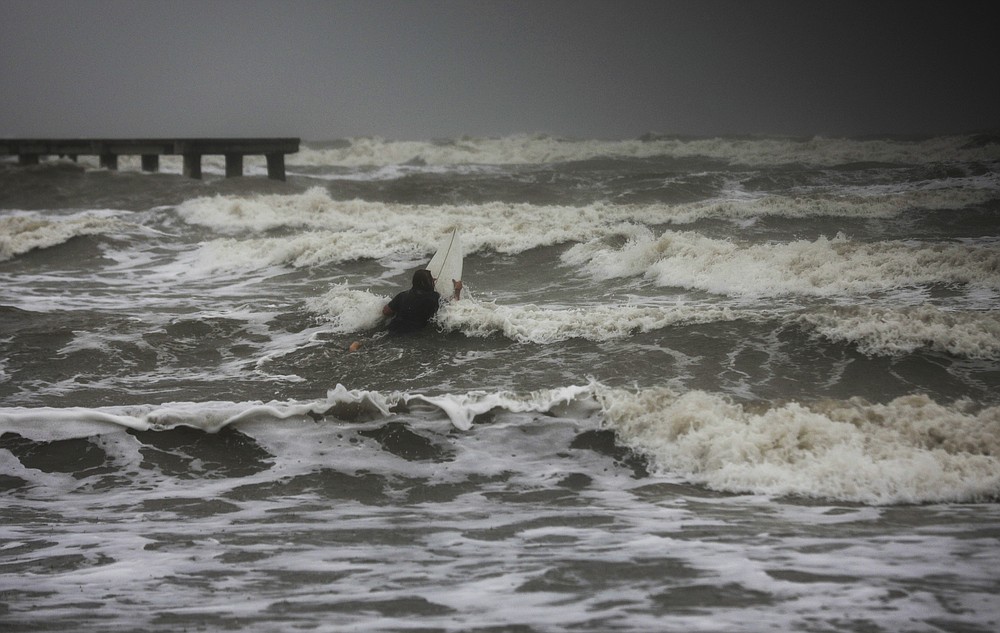 A surfer tries to paddle through the surf as wind and rain from Tropical Storm Nicholas batters the area Monday, Sept. 13, 2021, along the seawall in Galveston, Texas. (Jon Shapley/Houston Chronicle via AP) 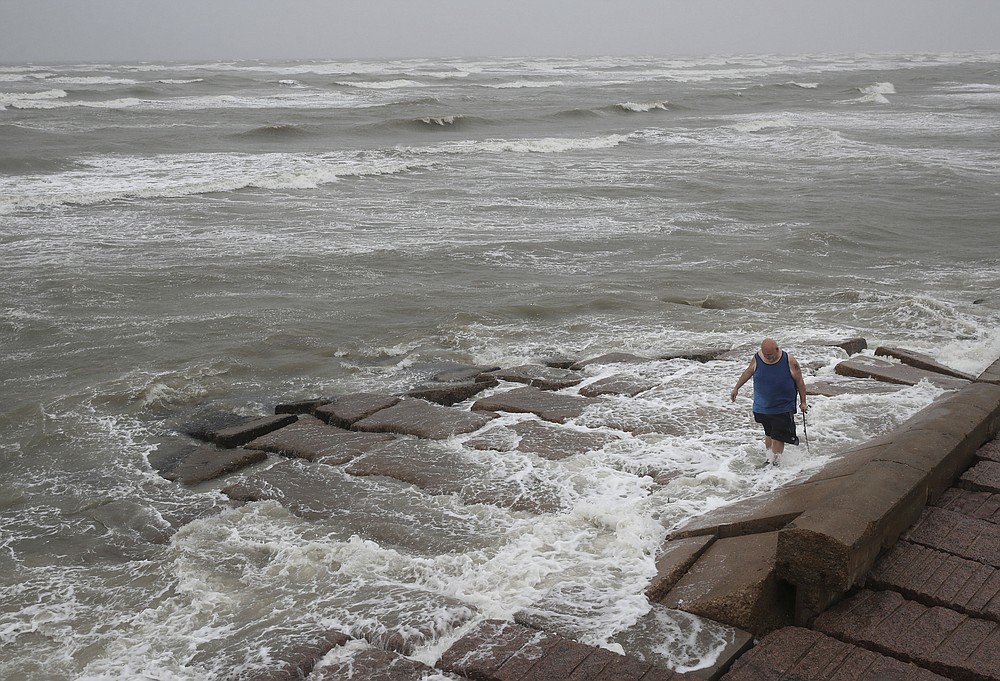 John Pittman, a nurse who works in emergency medicine, fishes to decompress as Tropical Storm Nicholas heads toward the Texas coast, Monday, Sept. 13, 2021, along the seawall in Galveston, Texas. (Jon Shapley/Houston Chronicle via AP)