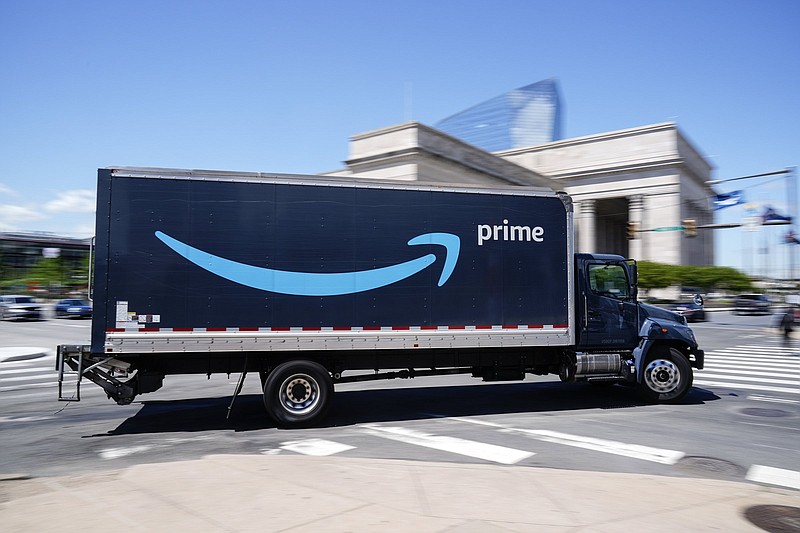 FILE - An Amazon truck drives in in Philadelphia, Friday, April 30, 2021. Amazon wants to hire 125,000 delivery and warehouse workers and said Tuesday, Sept. 14, 2021 that it is paying new hires an average of $18 an hour in a tight job market as more people shop online. The company is also offering pay sign-on bonuses of $3,000 in some parts of the country. (AP Photo/Matt Rourke, file)

Amazon wants to hire 125,000 delivery and warehouse workers and said Tuesday that it is paying new hires an average of $18 an hour in a tight job market.

Competition for hourly workers has become fierce, and many companies are offering higher pay, sign-on bonuses and other incentives. Last week, the package delivery company UPS promised to hand out job offers in 30 minutes after candidates apply for many of the 100,000 holiday jobs it plans to fill.

In an interview Tuesday, Kroger Chief Executive Officer Rodney McMullen told CNBC that the national grocery chain has 20,000 positions it is struggling to fill.

"We're aggressively hiring anywhere we can," McMullen said. "One of the biggest constraints we have right now is finding talented people."

Amazon's starting pay is still $15 per hour. But with labor markets growing tight in regions of the country, the company said new hires could make as much as $22.50 an hour. It's also paying sign-on bonuses of $3,000 in some places. Earlier this month, Amazon pledged to hire 40,000 people to fill corporate and technology roles.

When it began paying at least $15 an hour in 2018, Amazon was one of the first major companies to do so. But others have caught up. Target and Best Buy pay $15 an hour, too. Costco pays $16 an hour. Now, Amazon is finding it has to offer more.

Last week, it said it would pay the full college tuition for hourly workers starting in January. Workers will be eligible 90 days after they've started work. Amazon said it'll fund tuition at hundreds of partnering schools, but it didn't name them.

Walmart Inc. in July said it would pay the costs of tuition and books for its hourly staffers. Target Corp. last month said it would pay undergraduate tuition for more than 340,000 employees at its U.S. stores.

Companies are having a difficult time finding workers even though the number of Americans seeking unemployment benefits has reached pandemic lows. Rising infections with the arrival of the delta variant appear partially to blame.

America's employers added 235,000 jobs in August, a surprisingly weak gain after two months of robust hiring and the clearest sign to date that the delta variant's spread has discouraged economic activity, and potentially job-seekers.

Amazon typically ramps up hiring in the fall to ensure it has enough workers for the holiday shopping season, and it often kicks that off with a string of announcements about its hiring goals.

"It is competitive out there, but we like that environment," said John Felton, senior vice president of global delivery services. "It's critical for us to make sure we are very competitive. We think that's the right kind of experience for employees and allows us to attract amazing, high-quality employees."

More people have shifted from stores to online shopping over the past year during the pandemic, and retailers have adjusted hiring to accommodate those patterns. Amazon, which is now the nation's second-largest private employer, hired 500,000 people last year alone.

The company on Tuesday said it had opened more than 250 new warehouses, sorting centers, delivery stations and air-cargo hubs in the U.S. and will open 100 additional buildings this month.

The company employed 950,000 people in the U.S. at the end of June, and 1.3 million worldwide. Most of those people work in the company's logistics division, primarily in the warehouses that store and pack items.

Amid the hiring spree, Amazon has been roiled by labor unrest, including a failed attempt to unionize a facility in Alabama. Jeff Bezos earlier this year pledged to focus more on the welfare of Amazon workers, a sentiment echoed by his successor, Chief Executive Officer Andy Jassy.

Information for this article was contributed by Joseph Pisani and Michelle Chapman of The Associated Press and by Giles Turner and Matt Day of Bloomberg News (TNS).