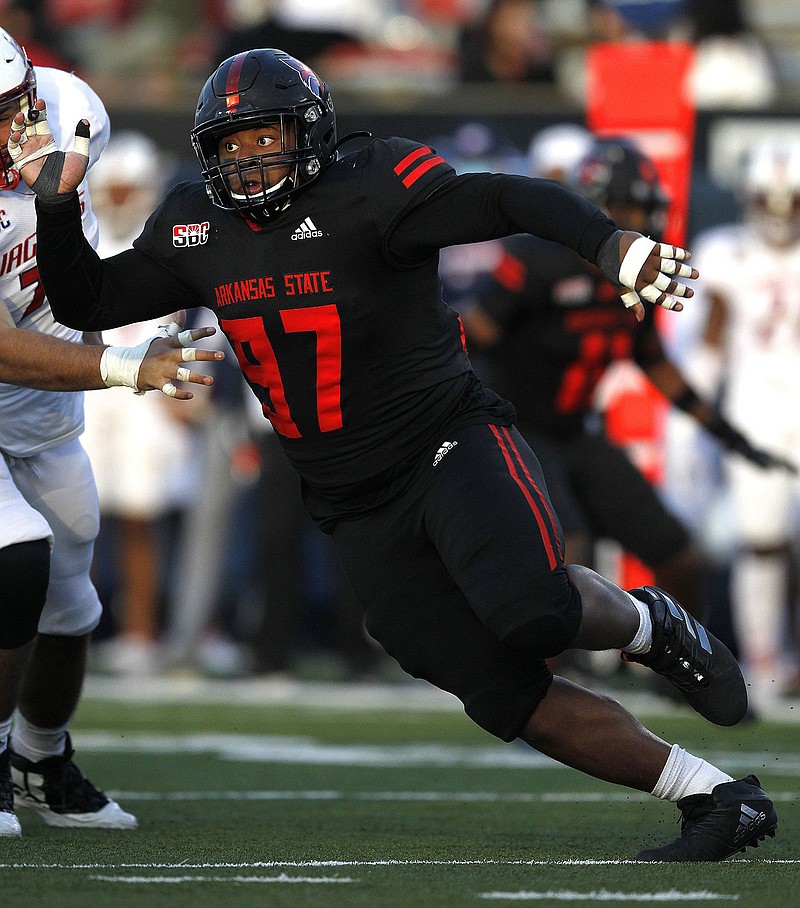 JONESBORO -- Pick any of the six Memphis touchdowns that went for 40-plus yards last Saturday in the Tigers 55-50 victory over Arkansas State and you'd be able to find multiple things that went wrong for the ASU defense: missed assignments, lack of gap integrity, poor reads, late adjustments.

Yet it was the shortest of the Tigers' scores that encapsulated far too many of the Red Wolves' issues.

Defensive tackle Vidal Scott looked to have Memphis running back Marquavius Weaver down in the backfield, holding onto the lower half of his left leg. But with his right hand, Weaver steadied himself, broke free from Scott and slipped through a wide hole in the ASU line for the 4-yard score early in the fourth quarter.

There was a missed tackle, an open lane and nobody swarming to the ball -- all in a matter of seconds.

"Basically, [we have to] learn how to tackle," senior Terry Hampton said. "That one touchdown could've really swung the game."

It's not that the Red Wolves' defense has been remotely as bad as it was a year ago. Through two weeks, Pro Football Focus grades ASU as the best defensive unit in the Sun Belt Conference -- 46th nationally -- with the league's top run defense and a pass defense that's among the upper half of the Sun Belt as well.

The counting stats paint a different story, though. The Red Wolves are second-to-last in yards and passing yards allowed per game along with surrendering an average of 38 points per game.

Of course, allowing 55 points and 680 yards will do that.

There was no one flaw that stuck out more than the others against the Tigers. Five of Memphis' touchdowns came through the air, three on the ground.

But six of the eight could've easily been short-yardage plays. On the other two running scores -- both of which came courtesy of North Little Rock's Brandon Thomas -- ASU missed tackles and Thomas cut straight through the Red Wolves' line.

The first passing touchdown, which wound up being a 55-yard catch-and-run by Calvin Austin III, was a 5-yard crossing route over the middle where he didn't even have to elude a defender before getting to the sideline and sprinting to the end zone.

On the penultimate touchdown of the first half, tight end Sean Dykes turned a 5-yard curl into a 40-yard score when seven of the 11 defenders were immediately sucked in by a Shotgun play-action fake. Dykes needed to beat just two Red Wolves to get to the left sideline and then he was off to the races.

"We watched the video [and] we said, 'Was it a scheme issue? Was it a fundamental-and-detail issue? Was it an effort issue? And was it a talent issue? Why did those things happen?' " Jones said. "A lot of times, it was just discipline to execute -- our eyes, our gap integrity -- and then there's a couple times we just didn't get off blocks.

Perhaps there will be a bit of reprieve against Washington on Saturday. The Huskies have just two offensive touchdowns this season and are 112th among FBS teams in total offense, averaging 317.0 yards per game.

ASU has been equally bad on the opposite side of things, ranking 126th of 130 teams in total defense.

Hampton said he believes he and his teammates are capable of taking a step forward. ASU players and staff have repeatedly said this defense is far improved from last year's unit.

"We have that mindset to [fix it]," Hampton said."