Bradshaw still a star with fans 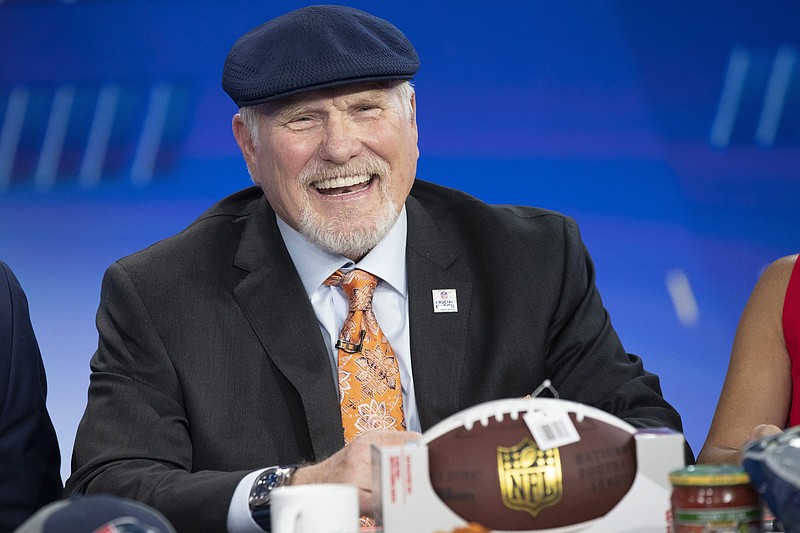 LRTC founder David Bazzel sat down with Bradshaw and orchestrated what turned into a 45-minute variety show, which included a Bazzel-Bradshaw duet of a song, "What a Day That will Be," that appeared on one of Bradshaw's two gospel albums in 1976.

"He kept on raising the volume," Bazzel said, "and raising it some more."

The audience at the Doubletree Hotel in downtown Little Rock laughed at Bradshaw's aw-shucks humor, cheered the musical interlude with Bazzel and leaned into every word as he touched on serious subjects, such his battle with anxiety and depression and how he raised two of his daughters after getting divorced.

Bradshaw discussed his relationship, on and off the screen, with actor Burt Reynolds, and what it was like to work with Farrah Fawcett in the 1981 Reynolds classic "Cannonball Run."

"I was digging me some Farrah Fawcett," Bradshaw said, one of the countless one-liners he cracked.

Bradshaw, 73, started the program in the most Bradshaw way:

"Hey folks, how you doing?"

Bradshaw dove into the humor and shoot-from-the-hip style that has been his calling card.

"From the minute I picked him, he has really great to work with," Bazzel said of Bradshaw, who flew in from Las Vegas after hosting "The Terry Bradshaw Show" at the Luxor Hotel on Sunday night.

Bradshaw did his Las Vegas show after appearing on Fox's NFL pregame shows earlier in the day,

"It's just amazing to see his body of work," Bazzel said.

Bradshaw, wearing a T-shirt under an unbuttoned Hawaiian-style shirt, talked about his weight and how his wife, Tammy, got him on the Keto diet.

He discussed the difference between playing the rough-and-tumble football he did for the Pittsburgh Steelers from 1970-1983 compared to today, when quarterbacks are protected from late hits and any type of rough handling.

"I'm for protecting everybody, but I'm also old school," Bradshaw said. "Don't tell me how great these guys are and better than all the rest of us when they're not having to have their heads slammed to the turf.

"I get a little defensive. I've put my arm around Tom Brady (seven-time Super Bowl winner]. He's a mush body. And his wife [Brazilian model Giselle Bundchen], she ain't much either.

And laugh they did.

Bradshaw sides with the state of Arkansas is his distaste for the state of Texas. He said Texans have never forgiven him for beating the Dallas Cowboys in two Super Bowls when he played for the Steelers, and they are not fond of two of his products -- Bradshaw Beans and Bradshaw Whiskey.

"I appreciate what you all did to them Saturday night," Bradshaw of Arkansas' 40-21 victory. "That was one serious butt-whipping."

"I couldn't get into LSU." Bradshaw said. "I'm not dumb or anything, but I'm not really good at taking a test or anything."

The real reason Bradshaw didn't end up at LSU, he said, was because the quarterback who played ahead of him for his first three years at Woodlawn, was already at LSU.

So Bradshaw went to Louisiana Tech and spent the first 10 games as a freshman behind Phil Robertson of "Duck Dynasty" fame.

The audience cheered when Bradshaw talked about his classwork at Louisiana Tech.

"I did graduate with a 3.96 GPA," he said, pausing for dramatic effect. "It was cumulative, now."

"It ended up well," Bradshaw said of the four Super Bowls the Steelers won. "It did not start well."

Bradshaw raised eyebrows last Sunday on Fox when he launched into criticism of Green Bay Packers quarterback Aaron Rodgers after Rodgers talked about how he wanted to be involved in Green Bay's personnel decisions.

Bradshaw said he received criticism for his criticism of Rodgers.

"I'm not jealous," Bradshaw said. "I would have liked to have made $35 million. I tell you this, if you pay me $35 million, I'd play better than Rodgers did [in Sunday's 38-3 season-opening loss to New Orleans]."

Bradshaw said he got the feeling that Fox producers were disappointed in him.

"Well, there goes your interview with him," Bradshaw said of the reaction. "But see, I'm just smarter than everybody else. Maybe I just don't want to go to Green Bay."