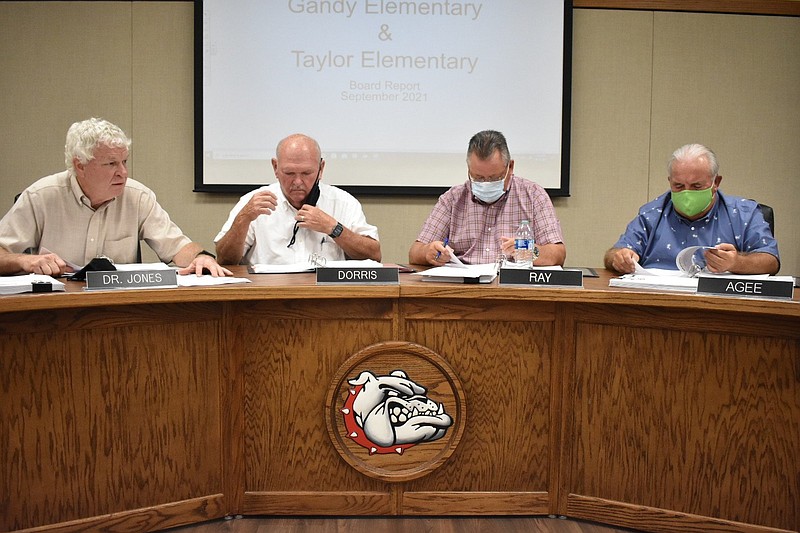 Third through fifth graders posted high scores on the English and reading ACT Aspire tests. The state average was surpassed for both tests at both campuses, with an achievement rate as high as 84% on ACT Aspire English test at Taylor — well above the 65% state average.

Both Gandy and Taylor principals expressed concern over achievement rates in ACT Aspire math testing for grades. At Gandy, a 33% rate fell just short of the state average of 37%, while at Taylor, 40% of students exceeded the benchmark.

“We’re low, but the whole world is low because of the gap in their learning,” Canada said. “So, like [Gandy Principal Bill] Tietz said, we’re going to improve and we’re going to do even better this year.”

“We’re identifying essential standards, we’re doing team meetings — who needs help with math? — and we’re looking forward to improving both our Star and ACT Aspire for next year,” Canada said.

The data was issued as Gandy and Moody elementary schools were selected for the National Assessment of Education Programs.

According to White Hall assistant superintendent Debbie Jones, the program identifies districts from Arkansas that would “be a good representation of students across America” and set up its own testing to see how students would perform compared to the rest of the nation.

The covid-19 vaccination rates in the district were 81% for teachers and 79% for all staff members, Dorris told board members. The WHSD offered financial incentives for employees to be inoculated.

The school district finalized an $86,986 contract with Otis Elevator Co. to service a 40-year-old elevator at White Hall High School. Superintendent Doug Dorris said Otis representatives would begin work on the elevator by Dec. 13 and have it completed by Christmas break.

The rafters at the fine arts building, which is undergoing construction, are now hung, Dorris said.

“That’s starting to move forward at a pretty good rate,” Dorris said. “They said they’ll come in and put on a new roof first, and then they’ll put on all the concrete.” Flooring and permanent seating in the multipurpose building have yet to be installed, district Athletic Director Bobby Bolding said during his report, but the technology for the building is already in place. The building includes players’ dressing rooms, coaches’ office and an apparel store.

The district approved the hiring of Cedric Jackson as a district bus driver and Michael Hawkins as a special education aide and volunteer assistant basketball coach.