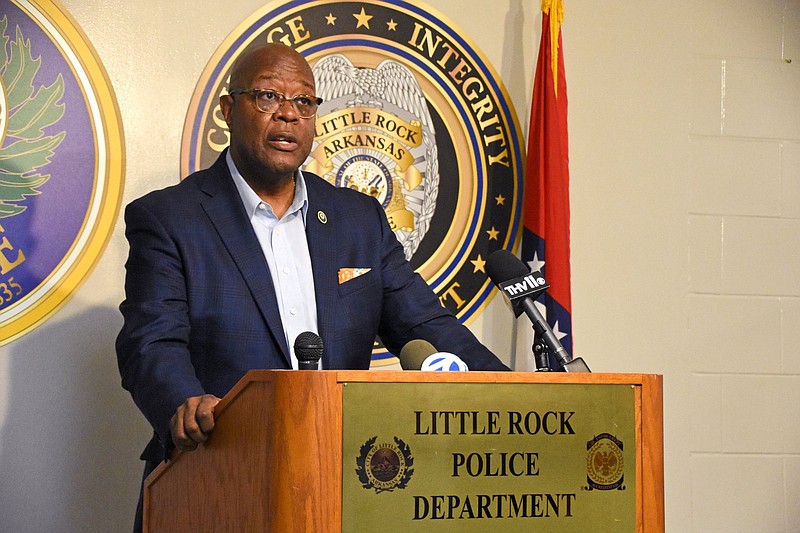 [DOCUMENT: Judge's order on the release of records ​» arkansasonline.com/915order/]

On Friday, Pulaski County Circuit Judge Tim Fox ordered the city to release some underlying materials related to an investigation of Humphrey to attorney Robert Newcomb, who represents several officers who have sued the chief and the city.

Among other documents, the order required the city to release to Newcomb emails from Arkansas Tech University professor Loretta Cochran to several city officials about an adverse employment action against former officer David Mattox by close of business Monday.

The city hired Cochran in a temporary, part-time capacity to work through a backlog of human-resources reviews, a mayoral spokeswoman said in late July. Cochran prepared a final report tied to the investigation into Humphrey after internal complaints from police personnel.

"Just to reiterate my previous guidance, it is my opinion that the termination of Officer Mattox is a clear indication of racial discrimination, hostile working conditions, and retaliation by Lt. [Brittany] Gunn, Asst. Chief Crystal Haskins, and Chief Keith Humphrey," the email, provided to the Arkansas Democrat-Gazette by Newcomb, reads. "This ill-advised decision will most likely contribute to a continuing destabilization of the LRPD. It also exposes the City to an ever increasing damages award, should Officer Mattox (and/or several other LRPD personnel who have been targeted for harassment & retaliation by the Chief and his allies) elect to take this to court. I only pray that no lives are lost due to this ongoing but preventative crisis."

Witherell wrote back to Cochran on the same date that she had notified the city manager of Cochran's concerns.

City officials acknowledged but had not fulfilled a public-records request from the Democrat-Gazette on Tuesday for the emails.

When asked for comment from Humphrey regarding Cochran's email, Little Rock police spokesman Mark Edwards responded by email, "We do not comment on legal matters."

As general rule, the city has a policy not to comment on personnel matters and ongoing litigation, mayoral spokeswoman Stephanie Jackson said in response to a request for a comment from Mayor Frank Scott Jr.

Mattox, who is white, was fired recently after Humphrey, who is Black, sustained findings of untruthfulness and unauthorized investigation. The violations were tied to a police investigation into a man suspected of exposing himself to women. Mattox's wife was reportedly one of the victims.

It's the most recent development in a series of escalating fractures in the Police Department between Humphrey and many rank-and-file officers as well as command staff.

In August, a different judge denied the release of Cochran's final report in response to a lawsuit from Newcomb, because the administrative review of the employee being investigated, Humphrey, had not been completed.

Newcomb's office submitted an Arkansas Freedom of Information Act request Aug. 30 to the city for documents related to the report, but the city did not respond to the request except to acknowledge its receipt, according to the findings of facts listed in the recent court order.

Fox's court order states Newcomb by Monday was to be given emails from Cochran to Dr. Shella Atlas, City Manager Bruce Moore, Scott and to a city employee working in the mayor's office as well as any document sent by police Lt. James Sloan to the FBI regarding the action against Mattox.

The order also states that the city should give Newcomb any documents from March 1 to Sept. 1 sent by Moore to any city elected officials or mayor's office employee that related to Newcomb's four clients.

Newcomb said Tuesday that he had received only the one email exchange between Cochran and Witherell and has not received the investigative report.

"I'm not satisfied that I've gotten all the emails, but I can't say there are more," he said.

Newcomb said in relation to Cochran's email, "To me, it's a damnation of the chief of police and mayor's continuation of supporting him."

Newcomb is representing the same plaintiffs in a separate lawsuit in Pulaski County Circuit Court that names Humphrey, three other police officials and the city. The complaint accuses them of abuse of process, discrimination and violation of the plaintiffs' rights.

Humphrey was appointed police chief in 2019. He has clashed with the Little Rock Fraternal Order of Police and several of his subordinates over a host of issues, beginning with the decision to fire former officer Charles Starks just three weeks into his command.

Starks was fired for violating police procedure when he shot and killed 30-year-old Bradley Blackshire on Feb. 22, 2019. Starks was cleared of wrongdoing by the prosecuting attorney's office.

Newcomb also represented Starks in his appeal. Fox ordered that Starks be reinstated the following January. In a resignation letter eight months later in September 2020, Starks citing the "intolerable" work environment since the fatal shooting and specifically how he had been treated by Humphrey and the mayor.

On Sept. 15, 2020, seven Little Rock police captains and three assistant chiefs addressed a letter to Scott and the Little Rock Board of Directors describing Humphrey as "a catastrophic problem" and asking the city to resolve the issues related to his leadership of the Police Department.

Information for this article was contributed by Joseph Flaherty of the Arkansas-Democrat Gazette.