Golden Lions rest up thanks to bye week 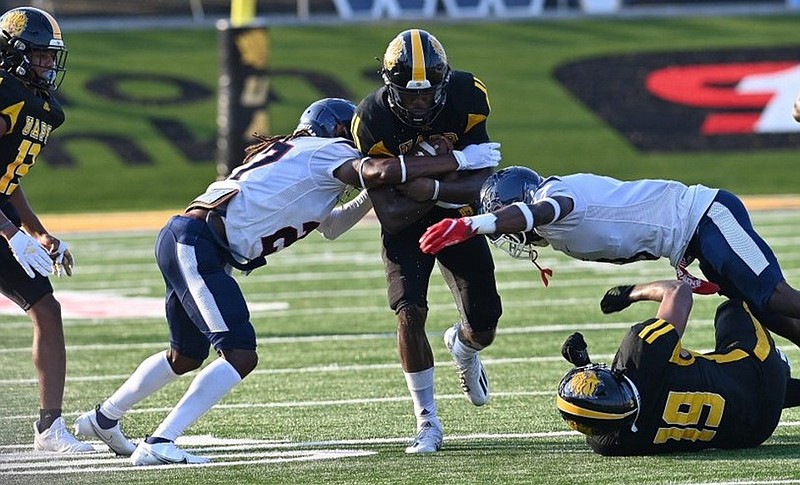 UAPB quarterback Skyler Perry keeps the ball and tries to break a tackle from Lane College during a Sept. 4 win. (Special to The Commercial/Darlena Roberts)

With a Week 2 bye, University of Arkansas at Pine Bluff Coach Doc Gamble said he “forced” his players to do something else other than their normal game routine.

“Just like any other bye week, this past week was about us and getting our guys rested,” Gamble said during this week’s Southwestern Athletic Conference coaches’ Zoom meeting. “We forced them to stay away from the building and forced those guys to do something else, more so academically than anything else and a little less football.” Gamble didn’t give any updates on key players he rested during the season-opening win against Lane College, including wide receivers Josh Wilkes and Tyrin Ralph, but he said the Golden Lions’ practices were more about them than the University of Central Arkansas, whom they’ll visit for a 6 p.m. kickoff Saturday in Conway.

The Bears (0-2), who once dominated a long rivalry with the Lions going back to their days in the old Arkansas Intercollegiate Conference, slipped six spots to No. 25 in the latest STATS Perform FCS poll, the Football Championship Subdivision’s equivalent to the Associated Press Top 25 in the Football Bowl Subdivision. That came after a 43-34 loss to Missouri State University (1-1), which catapulted the Springfield-based Bears six spots to No. 17.

“Although they’ve lost two, they’re still a very good football team,” Gamble said. “I see when I watch video of those guys as we prepare, I see a very good football team. We see tremendous quarterback play, a kid with great arm talent, real good skill guys outside, you see a defense that’s stingy at times. You see special teams units that are solid. They’re still a good football team.” Much of the talk about UCA centered on quarterback Breylin Smith, the junior from Conway High School who made first-team All-Southland Conference in 2020. (UCA now competes in the ASUN Conference.) Smith threw 25 for 38 for 332 yards and two touchdowns with two interceptions against Missouri State. One of his passes went for 71 yards to Tyler Hudson, a preseason All-American selection.

“They’ve been close the last couple of times; they just didn’t come away with the W,” Gamble said of UCA. “Other than that, they don’t have any glaring weaknesses. It’s one we have to prepare for, and we look forward to going up there to play.”

The bye week did UAPB no favors in the BOXTOROW HBCU Championship Subdivision Coaches and Media polls, as the Golden Lions slipped one spot to No. 3 in both lists.

But it did for Alabama A&M University (1-0), which despite taking a week off remained No. 1 in both polls administered by the national radio show “From the Press Box to Press Row.” Jackson State University (2-0) leapt from No. 3 to No. 2 in both polls after a 38-16 win over Tennessee State University in the Southern Heritage Classic at Memphis behind Shedeur Sanders’ 30-for-40 passing for 362 yards and three touchdowns. Sanders set a Classic record for most completions.

Former UAPB quarterback Shannon Patrick completed 27 of 48 passes for 238 yards and two touchdowns with an interception in a 38-28 loss to the University of Texas at El Paso.

PBHS graduate Berkarion Black caught touchdown passes of 15 and 8 yards and finished with three catches for 35 yards in Bluefield (W.Va.) State College’s 35-27 win at Elizabeth City (N.C.) State University. It was Blue-field’s first victory since the program shut down following the 1980 season.