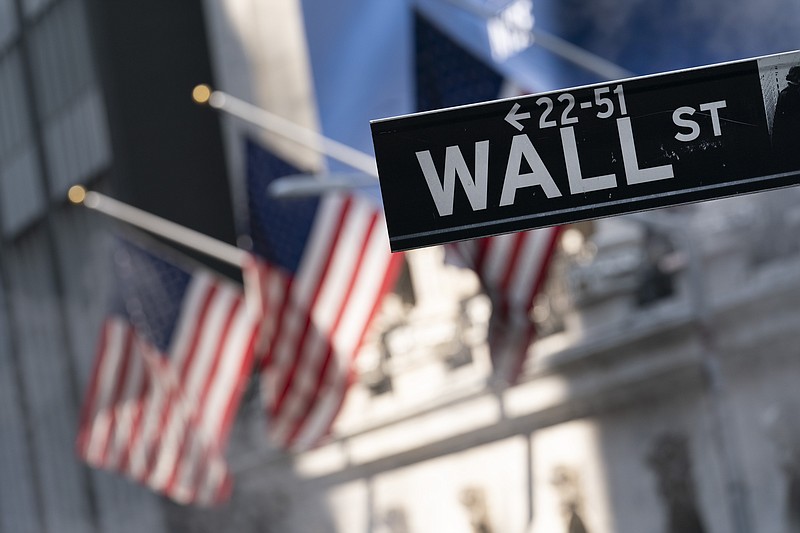 A sign for Wall Street hangs in front of the New York Stock Exchange, July 8, 2021. Stocks edged lower in morning trading, quickly reversing course after a brief gain following the latest data on inflation. Communications and industrial companies had some of the broadest losses, while health care stocks gained ground. U.S. consumer prices rose a lower-than-expected 0.3% last month, the smallest increase in seven months and a hopeful sign that inflation pressures may be cooling. (AP Photo/Mark Lennihan, file)

Banks and energy companies led a broad slide for stocks on Wall Street Tuesday, handing the S&P 500 its sixth loss in the last seven trading days.

The S&P 500 fell 0.6% after an early gain faded by midafternoon. The benchmark index's 11 sectors all ended in the red, with banks, energy stocks and industrial and communication companies among the biggest drags on the index. The selling more than offset the S&P 500's modest gain from a day before.

The market had started higher after the latest data on inflation came in better than economists had expected, but reversed course within the first hour of trading, suggesting the report didn't ease investors' inflation worries. On Friday, the government reported that U.S. wholesale prices jumped sharply in August.

"There are still inflationary pressures even if they [consumer prices] came in lower than expected," said Kristina Hooper, chief global market strategist at Invesco. "It doesn't mean that it's over."

That report on prices at the wholesale level was worse than expected, signaling problems for companies contending with higher costs, Hooper said. Those costs could be passed along to consumers, but companies unable to do that could see their earnings get dented.

Inflation has been a key concern for investors, who are trying to gauge how it will affect both the economy's recovery and the Federal Reserve's policy on maintaining low interest rates. The central bank has said higher costs for raw materials and consumer goods will likely remain temporary as the economy recovers, but analysts are concerned that the higher prices could stick around and dent companies' bottom lines while also crimping spending.

Bond yields eased after the Labor Department's report. The yield on the 10-year Treasury fell to 1.29% from 1.32% late Monday. It had been rising overnight to about 1.34% shortly before the report was released.

The lower bond yields weighed down banks, which rely on higher yields to charge more lucrative interest on loans. Bank of America fell 2.7% and JPMorgan dropped 1.7%.

The broader concerns about inflation and rising prices have added to choppy trading, along with lingering worries about how the more contagious delta variant of covid-19 will affect an economy that's still finding its footing.

Elsewhere in the market, several companies made big moves on a mix of news.

Dietary supplement company Herbalife slumped 21.1% after cutting its profit and revenue forecasts. Wynn Resorts slid 10.9% for the biggest drop in the S&P 500 over concerns that its casinos in Macau could face stricter oversight as China tries to tighten regulations on a broad range of industries. Casino operator Las Vegas Sands also fell, closing 9.8% lower.

Cable provider Comcast fell 7.3% after the company warned about a slowdown in new cable customers.