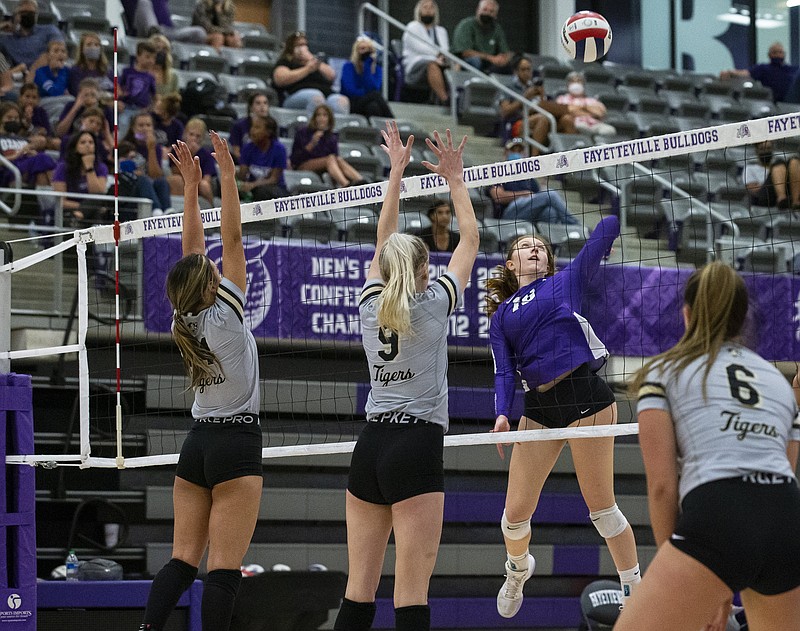 FAYETTEVILLE -- Fayetteville was challenged at times Tuesday evening, but had an answer every time en route to the 25-16, 25-19, 25-22 6A-West Conference win over Bentonville at Bulldog Arena.

The Lady Purple Bulldogs trailed in each set, including 15-12 in the third. But they responded with a 6-1 run to grab the lead for good to remain in a first-place tie with Springdale Har-Ber in the 6A-West.

Junior Maddie LaFata had three of her eight kills in the evening in that run to put Fayetteville (12-1, 4-0 6A-West) back in control. Brooke Rockwell finished with a match-high 14 kills, while Regan Harp chipped in with nine.

[Don't see the video above? Click here to watch: youtube.com/watch?v=6AMBxR7Qi0k]

"I think that makes us hard to defend when you have a lot of different weapons that can put the ball down," Phelan said. "And in pressure situations they aren't afraid to take a big swing so that makes our setters job easy when she has lots of people to distribute the ball to.

"I think offensively we had a pretty good night. We were in system with serve receive. Credit Bentonville, they always play good defense. I think we had to make plays.

Setter Kennedy Phelan dished out 40 assists, while junior Ella Weilert led the defense with 12 digs for the Lady Purple'Dogs.

Phelan said her team continues to get more comfortable together on the court, especially coming off winning the Tulsa Bishop Kelley Tournament of Champions over the weekend. The Lady Purple'Dogs went 5-0 over Friday and Saturday and won a five-set thriller over the host team in the finals.

"I think anytime you get to play that many matches, you kinda get in rhythm," Phelan said. "It helps just to get to play together especially early in the season. I do think we continue to get more comfortable with the rotations and the hitter-setter connection, that kind of thing.

"I feel like we've been really battle-tested. We've played a lot of really tough matches here the last few weeks. You have that been there, done that factor. Even if the score gets close they still have confidence in their ability to make plays in tough situations because they've been in some tough situations."

Trinity Hamilton led the Lady Tigers attack with 11 kills, while Lilly Thompson finished with a team-best 11 assists for Bentonville (8-4, 1-3).

The Lady Tigers travel to Rogers to continue league play on Thursday, while Fayetteville plays at Springdale High.

Madelyn Sestak and Ryan Russell cranked nine kills each to lead the Lady Saints to a 25-6, 25-15, 25-9 win over Huntsville in 4A-Northwest Conference play.

Bryslin Oden hammered 12 kills to lead the Lady Pointers to a five-set win.