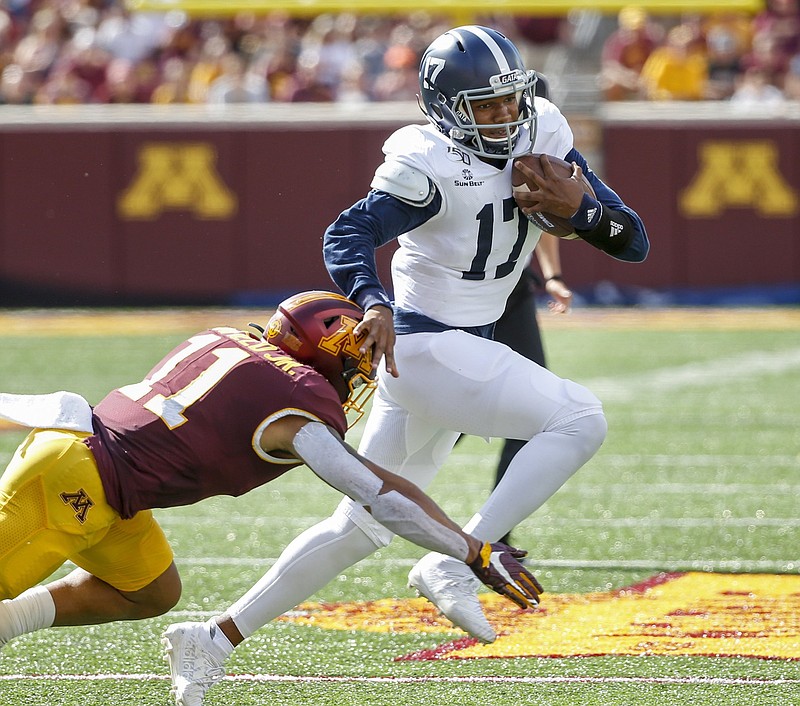 FAYETTEVILLE -- It's been a tough start to the football season for Georgia Southern.

The Eagles, who have played in bowl games the past three years, are struggling coming into Saturday's game at the University of Arkansas.

Georgia Southern (1-1) needed a defensive stop at its 29 in the final seconds to hold on and beat FCS opponent Gardner-Webb 30-25, then the Eagles lost 38-6 at Florida Atlantic.

"Really disappointed with our start to the season," Georgia Southern Coach Chad Lunsford said Monday. "I feel like we should be a lot better, a lot further along than we are. ... I feel like there have been flashes, but not enough consistency."

The Eagles will try to get moving in a positive direction against an Arkansas team that beat Texas 40-21 last week and is ranked No. 20.

"We've got to go back to the drawing board. We've got to soul search," Lunsford said. "We've got to make sure we're looking at ourselves as coaches in making sure we're putting our players in the best situation to play Georgia Southern football.

"This is a great week to do it. We've got a great opponent, an SEC opponent in Arkansas, and looking forward to that challenge and going back to work this week."

"I do know this about south Georgia kids -- they're tough," Pittman said. "They're a little bit like us, I think. They've kind of got a little chip on their shoulder, and maybe are fighting to get respect."

The Eagles had a 95-yard touchdown drive on their first possession at Florida Atlantic to take a 6-0 lead and went 45 yards to the Owls' 9 with a chance for another touchdown. But backup quarterback Sam Kenerson -- who replaced injured starter Cam Ransom -- fumbled and Florida Atlantic recovered.

The Owls scored 38 unanswered points, including 28 in the second half.

"We started the game well," Lunsford said. "Got in a position to go up 13-0 and fumbled the ball and lost momentum and never gained it back.

"FAU did a good job of really getting after us the last part of the first half and then obviously in the second half. We did not handle adversity well."

The Eagles will get a boost for the Arkansas game with the return of junior quarterback Justin Tomlin to lead their triple option offense.

Tomlin has played in 16 games, including four starts. Ransom, who returned against Florida Atlantic after injuring his ankle, and Kenerson are freshmen who hadn't played prior to this season.

"Justin's done a really good job of staying engaged," Lunsford said. "The first two weeks being ineligible, he spent most of his time over on the scout team trying to help our defense and accepted that role really well and did a good job.

"But I think this offseason, he prepared himself to be the starter. I thought through training camp he really stepped up and helped our offense, so it'll be good to get him back."

Tomlin has rushed 69 times for 392 yards and 3 touchdowns in his career and completed 23 of 51 passes for 3 touchdowns.

"I think he wants to get out there and he wants to help his team," Lunsford said. "Even though it is limited experience, he has started games here. I expect him to come in and really give us a good charge for our offense."

"LSU was definitely a buzzsaw that year," Lunsford said. "That was their national championship year, and our starter got knocked out of the game.

"[Tomlin] went in and obviously the environment and playing against an SEC team, that definitely should help him [at Arkansas]. He shouldn't be surprised. I did think he played well at Minnesota. I don't think the stage Saturday will be too big."

Along with Tomlin, the Eagles' top playmakers are running backs Logan Wright (30 carries for 206 yards) and Amare Jones (28 for 199) and slot receiver Khaleb Hood (9 catches for 94 yards).

"We can definitely perform at a higher level than what we've been showing," Jones said. "The stuff that we're getting beat on, I've seen us defend it, I've seen us score on it.

"I've seen us have an answer for everything that has been given to us. The only thing stopping us is ourselves."

"We're not going to totally forget what happened, but we've got to focus on the next opponent," Birdsong said of flushing the Florida Atlantic loss. "There's nothing that we can say or do to get that game back. What happened is what happened. All we can do is move forward from it."

Lunsford said the Eagles have struggled with momentum shifts.

"I think we're having trouble resetting," he said. "Once something doesn't go our way, I think we're more playing to not make a mistake instead of turning it loose and playing free.

"So I think it's very important we get back to the basics this week, make it simple for our guys and make sure they're able to go play fast. I think you'll see a better result if we go out and play free like our hair's on fire."

"They're an SEC football team, a lot of talent, a lot of speed," Lunsford said. "I just want our guys to go there and show they belong. I want them to show that they have a lot of heart.

"It ain't about talent. It's about how hard you play. It's about being sound. And it's about playing Georgia Southern football.

"We always talk about expecting to win. If we go into this thing going, 'We don't have a chance. They're an SEC football team, blah, blah, blah,' then we don't need to get on the bus.

"I don't see our guys like that. I see our guys, 'Let's go show that we belong and we can go beat a team like Arkansas.' When we show up Saturday, we'll see what happens."