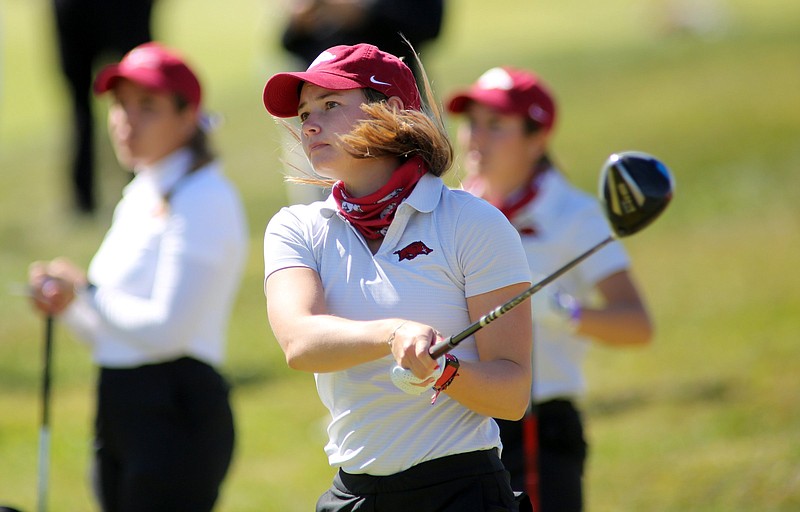 University of Arkansas Razorback golfer Brooke Matthews watches her drive on the first tee Monday, October 5, 2020, during the inaugural Blessings Collegiate Invitational at the Blessings Golf Club in Johnson. The golf tournament brought together all 14 men's and women's golf teams from the SEC to play in the 54-hole three day tournament. Check out nwaonline.com/201006Daily/ and nwadg.com/photos for a photo gallery.(NWA Democrat-Gazette/David Gottschalk)

Matthews won her second season-opening event in a row Tuesday, breaking an NCAA record in the process while leading the Razorbacks to a team victory at the Cougar Classic hosted by the College of Charleston in Charleston, S.C.

The redshirt senior from Rogers capped a dominating performance with a final-round 64 to fire an NCAA record 25-under par at the 54-hole event.

"That's crazy," Matthews said. "I mean, wow, that's not something I really even had on my radar, to be honest, like ever.

"When we came off the course and they were doing the trophy presentation when they said it [was an NCAA record], I was like, 'Oh my gosh,' and it seemed like a big deal."

Matthews took control with rounds of 63 and 64 on Monday and seized the NCAA record by six shots for a three-round tournament. The previous NCAA record for a 54-hole tournament was held by Ohio State's Jaclyn Lee, who shot a 19-under 197 at the Westbrook Spring Invitational on Feb. 25-26, 2018.

Matthews beat North Carolina's Krista Junkkari by 12 strokes and helped the Razorbacks hold off Baylor by one stroke on the par-72 course at the Yeamans Hall Club. Matthews eclipsed Maria Fassi's UA record for a 54-hole tournament of 16 under in 2017-18 at the Mason Rudolph Challenge. Matthews won her third career event to go along with the 2019 Liz Murphey Collegiate Classic and last year's season opener at the Blessings Collegiate Invitational last October at Blessings Golf Club in Johnson.

"Four years ago I played my very first college tournament here at Yeamans Hall, so I already had good memories from it," Matthews said. "I just got out to a hot start and kind of rode the high the whole way."

"At that golf course, if you drive it well it sets you up for a lot of wedges, and then I was hitting my wedges well, and then I was making my putts, so yeah, kind of everything was working for me this week," Matthews said.

Arkansas junior Julia Gregg shot a 68 on Tuesday and carded a 6-under 210 to tie for sixth, 19 shots behind Matthews' sizzling 191. Sophomore Kajal Mistry tied for 19th at 1-under 215.

Freshman Ffion Tynan posted a 3-over 75 for Arkansas' final counting score on Tuesday. Tynan tied for 83rd at 12 over, while Arkansas sophomore Miriam Ayora tied for 79th at 11 over.

Matthews led the 17-team, 93-player field with 26 birdies, 11 more than Gregg and Junkkari, who were second with 15 birdies. Matthews did her big scoring on the par 4s, playing them in 15 under, nine strokes better than the next-best player.

In her final round, Matthews had five birdies on the front 9 to make the turn at 31, then followed with an eagle on the par 4 10th to reach 7 under. Matthews finished the event with just three bogeys.

Arkansas started the final round one shot shy of Georgia, but surged into a sizable lead and finished at 23-under par to hold a late run by Baylor, which came in second at 22 under.

"It's great to come out of the gate hot,' Matthews said. "Like Shauna told us, 'You can't win them all if you don't win the first.' I'm proud of my girls. They showed a lot of fight. ... In our sport, every shot counts and it really came down to that one shot. We were just happy to be on this side of it this time."