U.K. puts off checks on food from EU 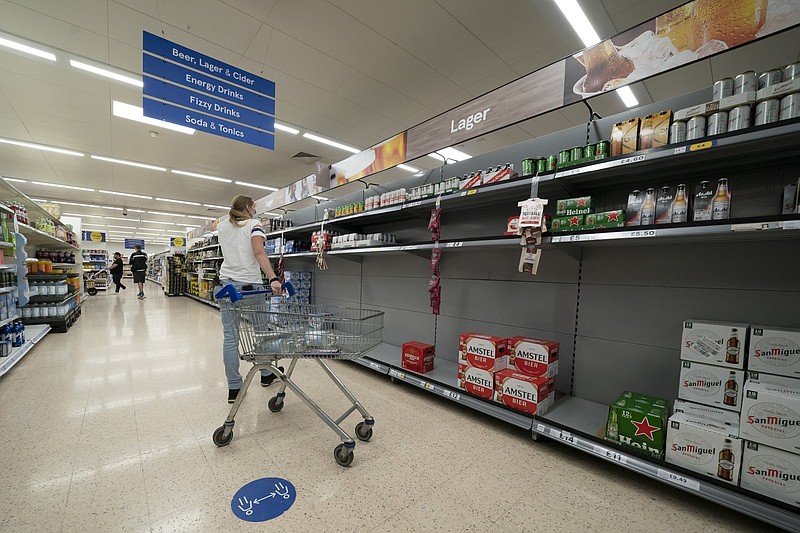 A view of empty shelves at a Tesco supermarket in Manchester, England, Sunday, Sept 12, 2021. Retailers, manufacturers and food suppliers have also reported disruptions due to a shortage of truck drivers linked to the pandemic and Britain?s departure from the European Union, which has made it harder for many Europeans to work in the U.K. (AP Photo/Jon Super)

LONDON -- Britain announced Tuesday that it is delaying the start of post-Brexit border checks on food imports from the European Union, saying trade disruption from the coronavirus pandemic already has piled pressure on businesses.

The delay means paperwork and checks for EU agricultural and animal products that were to begin in October won't be introduced until next year.

The U.K. said the "pragmatic new timetable" would ease pressure on businesses grappling with supply chain disruptions from the pandemic.

Paperwork on plant and animal products that was to start Oct. 1 has been pushed to Jan. 1, the government said. It said customs declarations and controls will be introduced on Jan. 1 as planned, but safety and security declarations won't be required until July 1.

Brexit minister David Frost said "we want businesses to focus on their recovery from the pandemic rather than have to deal with new requirements at the border."

He said the pandemic "has had longer-lasting impacts on businesses, both in the U.K. and in the European Union, than many observers expected."

"There are also pressures on global supply chains, caused by a wide range of factors including the pandemic and the increased costs of global freight transport. These pressures are being especially felt in the agri-food sector."

Britain has experienced sporadic but widespread supply problems in recent months, with gaps on supermarket shelves, fast-food outlets running out of chicken and some pubs running dry of a full selection of beer. Experts cite a perfect storm of factors, including Brexit and covid-19, leading to worker shortages in key areas such as trucking.

Since Britain left the EU's single market at the end of 2020, imports from the bloc are supposed to be subject to the same checks as goods from everywhere else in the world.

This is the second time the U.K. has postponed introducing some of the checks agreed in its divorce deal from the EU. It already has suspended indefinitely checks on food products going to Northern Ireland from the rest of the country. That has triggered a spat with the EU, which threatened legal action.

U.K.-EU talks on resolving differences over trade rules have made little progress. Britain's Conservative government has accused the 27-nation bloc of being needlessly "purist" in its approach to the rules, while the EU says Britain is failing to implement the deal to which Prime Minister Boris Johnson agreed.

The British Chambers of Commerce called the latest delay to border checks "sensible." But the U.K.'s Food and Drink Federation accused the government of blindsiding businesses that had prepared for checks.

"This move penalizes those who followed government advice and rewards those who ignored it," chief executive Ian Wright said.

He added that "the asymmetric nature of border controls facing exports and imports distorts the market and places many U.K. producers at a competitive disadvantage with EU producers."

Print Headline: U.K. puts off checks on food from EU