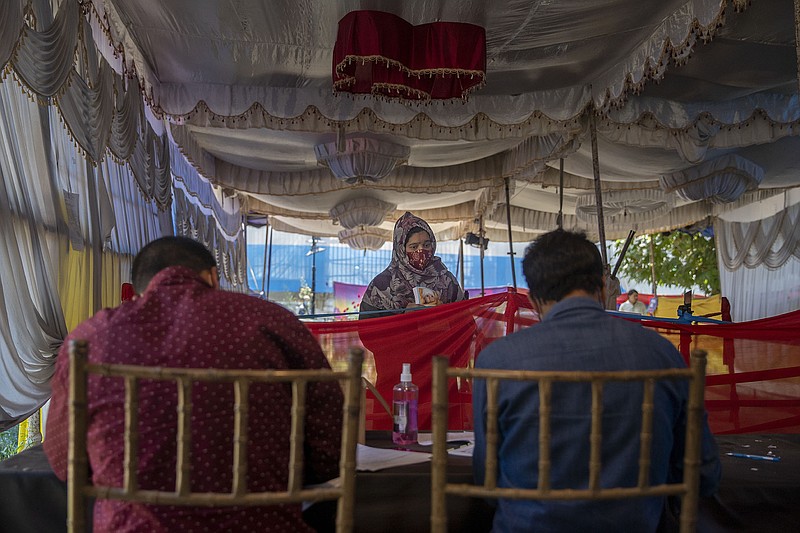 A Kashmiri health worker registers the name of a woman before taking her swab sample to test for COVID-19 in Srinagar, Indian controlled Kashmir, Tuesday, Sept. 14, 2021. (AP Photo/ Dar Yasin)

Infection rates are soaring in Kentucky, Georgia and Tennessee, and covid-19 deaths and cases in the U.S. have climbed back to where they were in late winter, wiping out months of progress and potentially bolstering President Joe Biden's argument for broad new vaccination requirements.

The U.S. is averaging over 1,800 covid-19 deaths and 170,000 new virus cases per day, the highest levels since early March and late January. And both figures have been on the rise over the past two weeks.

The country is still well below the terrifying peaks reached in January, when it was averaging about 3,400 deaths and a quarter-million cases per day, but the dire situation in some hospitals is starting to sound like that infection peak -- surgeries canceled in hospitals in Washington state and Utah; severe staff shortages in Kentucky and Alabama; a lack of beds in Tennessee; intensive care units at or over capacity in Texas.

The cases -- driven by the delta variant combined with resistance among some Americans to getting the vaccine -- are concentrated mostly in the South.

In Kentucky, 70% of the state's hospitals -- 66 of 96 -- are reporting critical staff shortages, the highest level yet during the pandemic, the governor said.

"Our hospitals are at the brink of collapse in many communities," said Dr. Steven Stack, Kentucky's public health commissioner.

The deteriorating picture nine months into the nation's vaccination drive has angered and frustrated medical professionals who see the heartbreak as preventable. The vast majority of the dead and the hospitalized have been unvaccinated, in what has proved to be a hard lesson for some families.

"The problem now is we have been trying to educate based on science, but I think most of the education that is happening now is based on tragedy, personal tragedy," said Dr. Ryan Stanton, an emergency room physician in Lexington, Ky.

[Video not showing up above? Click here to watch » https://www.youtube.com/watch?v=0f59kx61hn8]

The U.S. is dispensing about 900,000 vaccinations per day, down from a high of 3.4 million a day in mid-April. On Friday, a Food and Drug Administration advisory panel will meet to discuss whether the U.S. should begin giving booster shots of the Pfizer vaccine.

Stanton said he has admitted families where the delta variant has swept through generations, especially if the older members are unvaccinated.

"Now in Kentucky, one-third of new cases are under age 18," he said. Some children took it home from summer camp and spread it to the rest of the family, and now, "between day care and schools and school activities, and friends getting together, there are just so many exposures."

On a positive note, the number of people now in the hospital with covid-19 appears to be leveling off or even declining at around 90,000, or about where things stood in February.

Tennessee now ranks first in the country for new covid-19 cases per capita as the state continues to battle its worst virus surge yet.

As of Tuesday, 1 in every 81 Tennesseans had tested positive for the virus in the past week, according to researchers from Johns Hopkins. Meanwhile, the average number of new cases daily has risen by nearly 90% since Aug. 29, to nearly 12,000 new cases a day as of Sunday.

The latest milestone is one of several records the state has reached in the past several weeks, stemming from a spike in cases and hospitalizations among school-aged children.

Hundreds of students throughout Tennessee have been forced to quarantine or isolate because of the covid-19 outbreak. Some schools have closed classrooms as a result of staffing shortages, while others have temporarily asked the state to switch to virtual learning.

But measures aimed at containing the virus have run into opposition.

Last week, a Tennessee high school student who spoke at his district's School Board meeting in favor of a mask mandate faced laughs and heckles from adults while he spoke about his grandmother dying from the virus. Grady Knox was forced to temporarily stop talking throughout his testimony during the Sept. 7 meeting as the jeers became disruptive.

"This year we've already had to shut down because of a lack of staff in the school and we're only a month into it," Knox said. "This is going to continue if we don't have a mask mandate."

Ultimately, the Rutherford County School Board adopted a mask policy allowing parents to opt out.

Instead, Lee recently told reporters he was hopeful Tennessee was nearing a plateau in the virus spike.

"We're beginning to see what we think and hope, cautiously optimistic, we're hopeful is a plateau," Lee said. "We do not know. Sometimes that happens. Sometimes it spikes back up. But we are hopeful that we're at that point in the state."

As of Tuesday, the Tennessee National Guard had sent 215 personnel to help support 20 medical facilities across the state to assist health care workers focus directly on patients.

Lee has faced criticism both from state and federal officials after signing an executive order allowing parents to opt out of the mask requirement. Hundreds of students have been attending classes without masks ever since. Two lawsuits have since been filed attempting to overturn the statewide order, with a federal judge since temporarily blocking Lee's order in Shelby County as the suit moves through court.

"In honor of Ray, please get vaccinated if you have not, in an effort to free up resources for non-COVID related emergencies," his family pleaded in his obituary.

In Hidalgo County, Texas, along the Mexican border, about 50 patients were in the hospital with covid-19 on a given day in July. By early August, the number had soared to over 600.

"Back in July we were almost celebrating. Little did we know," said Ivan Melendez, public health authority for Hidalgo County. The situation has improved, with just under 300 people in the hospital as of Monday, but ICUs are still above 90% capacity, Melendez said.

The biggest surge over the summer occurred in states that had low vaccination rates, particularly in the South, where many people rely on air conditioning and breathe recirculated air, said Linsey Marr, a professor of civil and environmental engineering at Virginia Tech. She said states farther north could see upticks as the onset of cold weather sends people indoors.

Vaccination rates are not as low in some Northern states, but "there's still a lot of unvaccinated people out there. Delta is going to find them," Marr said.

The U.S. is now last among the world's most powerful democracies when it comes to covid vaccinations, squandering an early lead and plentiful supplies, as it was surpassed by Japan's steady progress in rolling out shots.

Japan, which started its mass vaccination program in April, has given a first dose to 63.6% of its population, according to government figures released Tuesday. The U.S. has administered at least one dose to 63.1% of its residents, the lowest among the Group of Seven nations.

The U.S. has seen immunization rates stall as the issue becomes politicized and anti-vaccination groups gain ground. It's a critical issue for Biden, who is trying to stanch an outbreak that has dogged the country all summer. There were more than a quarter of a million infections reported on Monday alone.

Last week, the president ordered all employers with more than 100 workers to require vaccinations or weekly tests, a measure affecting about 80 million Americans. And the roughly 17 million workers at health facilities that receive federal Medicare or Medicaid also will have to be fully vaccinated.

"We read about and hear about and we see the stories of hospitalized people, people on their deathbeds among the unvaccinated over the past few weeks," Biden said in announcing the rules. "This is a pandemic of the unvaccinated."

It might not be enough. Andy Slavitt, former Biden White House senior adviser for covid response, said in a tweet late Monday night that the U.S. will have the lowest vaccination level of all prosperous democracies by the end of September.

The requirements also have met with resistance and threats of lawsuits from Republicans.

Tuesday, Dr. Anthony Fauci warned that covid-19 could mutate into an even more virulent variant if the pandemic is not stamped out with mass vaccination.

The pandemic expert agreed with MSNBC's Mika Brzezinski when she suggested that a new "monster" strain could make the delta variant look like child's play.

"There's always a risk of, as you get more circulation of the virus in the community, that you'll get enough accumulation of new mutations to get a variant substantially different than the ones we're seeing now," Fauci said on the "Morning Joe" show.

Fauci said one of the most important reasons to get an overwhelming number of people vaccinated is to prevent the coronavirus from mutating into new variants as it spreads.

"You're vaccinating now to prevent the next mutant coming, the next variant from coming," Fauci said.

He suggested that future variants might even be resistant to the vaccines that have so far proved very effective in protecting people against even the virulent delta variant.

"Then it would in many respects negate some of the very positive protection that you get from the vaccines," Fauci said.

Public health experts like Fauci have been dismayed by the significant resistance to the covid-19 vaccines. Tens of millions of eligible Americans have so far refused to get the lifesaving shots, and a big chunk of them say they will not get inoculated.