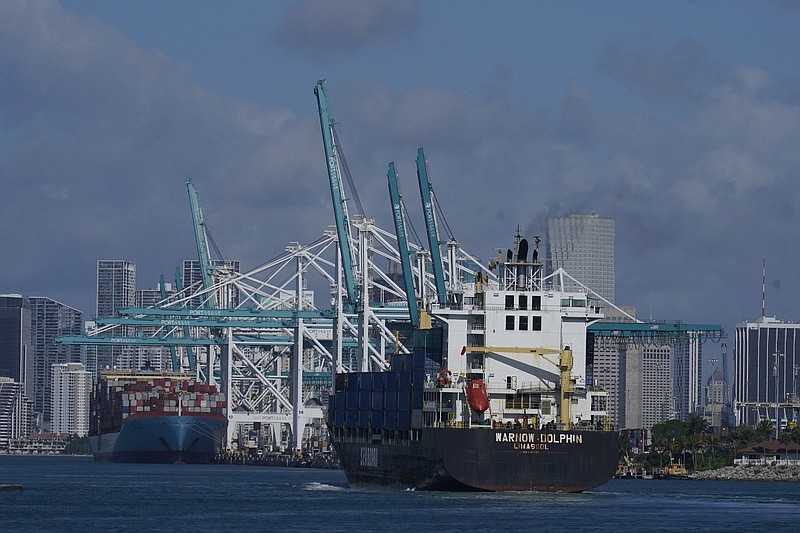 In this April 29, 2021 photo, The Warnow-Dolphin container ship enters PortMiami, in Miami Beach, Fla. Importers are contending with a perfect storm of supply trouble ? rising prices, overwhelmed ports, a shortage of ships, trains, trucks ? that is expected to last into 2022. (AP Photo/Marta Lavandier)

Global supply chains already tangled by the pandemic, labor shortages and sustained consumer demand in the U.S. are getting walloped by another disruptive force: Mother Nature.

Typhoon Chanthu is expected to hover near the mouth of China's Yangtze River through today, temporarily shutting operations at major ports. In Texas, the heart of the U.S.'s energy and chemical industries, Tropical Storm Nicholas made landfall early Tuesday, forcing terminals in Houston to curb cargo handling and restrict vessel traffic little more than two weeks after Hurricane Ida barreled into neighboring Louisiana.

Even temporary delays around two major trade gateways will ripple across a global shipping industry that's running with little slack during one of the peak seasons for ocean freight.

"The timing is awful and will add more pressure to an already stricken supply chain, particularly given the size of these ports," said Simon Heaney, senior manager of container research at Drewry Shipping Consultants Ltd. "Every covid-19 case and extreme weather situation compounds the problem and delays the return to normal operations."

Emblematic of the bottlenecks in trans-Pacific commerce: The line of container ships waiting to enter the twin ports of Los Angeles and Long Beach, Calif., rose to a record 56 vessels as of late Monday.

In the Gulf of Mexico, oil and gas production is still recovering from Ida's destruction, which also shut down grain shipments along the Mississippi River. Texas is also major crossroads for chemical makers -- many of which were forced to close during winter storms in February that led to shortages of industrial ingredients.

Nicholas, which was downgraded to a tropical storm after briefly being rated a hurricane, roared ashore at about 12:30 a.m. local time near the Matagorda Peninsula southwest of Houston. Flash-flood warnings were expected across the U.S. South.

"The recent hurricane season is exacerbating disruptions to port operations already crippled by the pandemic, and really stretching global supply chains to the limits," said Serena Huang, a senior analyst with Vortexa Ltd. "These supply chain disruptions are really posing a major challenge in moving commodities to their destination markets."

Operations at major wharves at the province's Zhoushan port -- home to some of China's largest oil storage tanks and refineries -- have been halted since Saturday afternoon. Chinese container ports affected by the latest storm were scrambling to reopen at least partially on Tuesday.

Still, it's not clear how much higher container rates can go even with capacity getting tighter. Two major carriers, France's CMA CGM and Germany's Hapag-Lloyd, said in recent days that they're capping spot prices pushed to record highs by earlier disruptions. The other major liner companies haven't publicly disclosed their pricing plans.