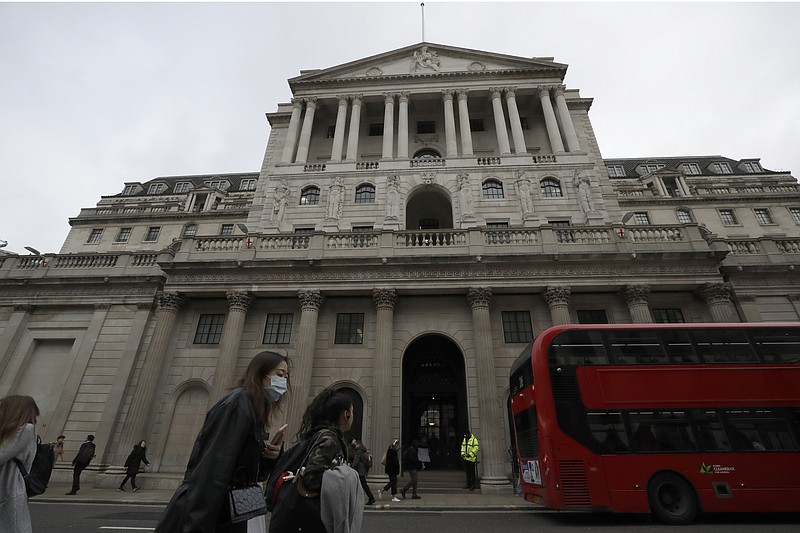 FILE - In this Wednesday, March 11, 2020 file photo, pedestrians wearing face masks walk past the Bank of England in London. The U.K. posted the biggest jump in annual inflation on record last month as global supply shortages and rising wages magnified the scale of price increases after pandemic-related discounts a year ago. (AP Photo/Matt Dunham, File)

LONDON -- Consumer prices in the United Kingdom rose at their fastest recorded rate during August as global supply shortages and higher wages accentuated the uptick from pandemic-related discounts a year ago, official figures showed Wednesday.

The Office for National Statistics said inflation accelerated to 3.2% in the year through August from 2% the previous month. The scale of the increase month-on-month was the biggest since the consumer price index measure of inflation was introduced a quarter of a century ago.

The increase takes inflation way above the Bank of England's target of 2%, and is likely to ratchet up pressure on policy makers to soon consider raising interest rates from record lows.

The increase was slightly more than anticipated in financial markets, with most economists predicting an increase of 3%.

Because inflation has risen by more than one percentage point above the Bank of England's target, its governor, Andrew Bailey, will have to write a letter to Treasury chief Rishi Sunak explaining what's going on.

Bailey is widely expected to say that much of the increase was caused by temporary factors related to the pandemic. Over the past decade, the central bank has tolerated higher-than-target inflation provided it thought the underlying reasons were transitory.

After all, restaurant prices were a big reason behind the August rise, as last year the government offered discounts on meals using its Eat Out to Help Out program in an attempt to bolster the economy in the aftermath of the first national lockdown.

Under the program, sitting customers were able to receive a 50% discount on food and non-alcoholic drinks at participating restaurants between Monday and Wednesday up to $13.50 per person. It was a very popular idea, with more than 100 million discounted meals eaten in the United Kingdom.

There were other reasons behind the increase, not least the sharp spike in energy prices as the global economy recovers from the initial shock of the pandemic. That impact on inflation is being felt around the world.

A pick-up in demand after lockdown restrictions were eased also contributed to the uptick, along with higher wages, global supply chain issues, a lack of drivers to transport goods and price rises related to Britain's departure from the European Union.

Economists said inflation is likely to peak at a higher level than previously thought, perhaps beyond 4%, though much will depend on the pandemic's path over the winter.

As a result, many think the Bank of England could stop its program of asset purchases in financial markets at the end of this year and increase its main interest rate from the record low of 0.1% as soon as the first half of 2022.

"The data seem consistent with the Bank of England's expectations of some modest tightening in the coming years," said Debapratim De, senior economist at Deloitte. "If U.K. growth continues as currently forecast, we are likely to see the first rate rise by next summer."