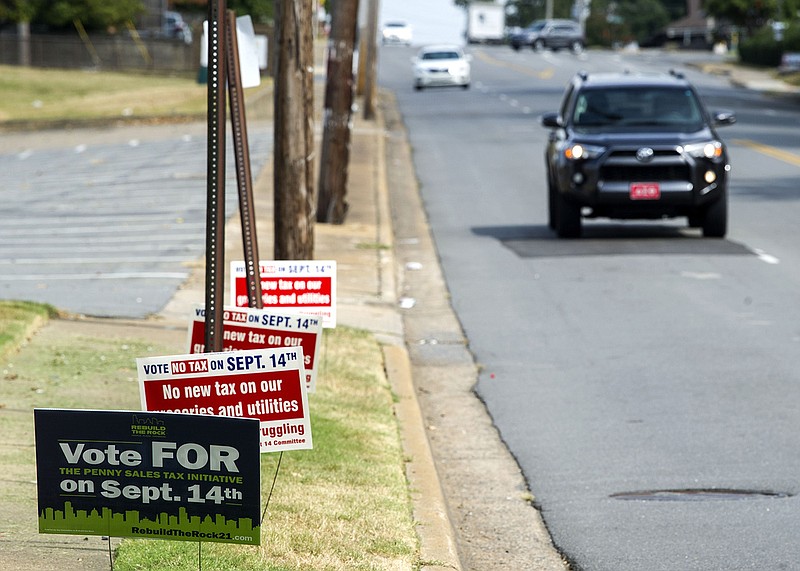 Signs in favor and against the sales-tax referendum stand on display outside a polling location at St. Mark Baptist Church in Little Rock on Tuesday, Sept. 14, 2021. (Arkansas Democrat-Gazette/Stephen Swofford)

Support for Little Rock Mayor Frank Scott Jr.'s "Rebuild the Rock" sales-tax increase in downtown, central and south-central precincts was not enough to overcome widespread opposition in the city's northwest, where residents voted overwhelmingly against the tax increase.

The proposed 1 percentage-point tax increase meant to generate $530 million in new revenue over the next decade for quality-of-life initiatives went down in defeat, 62% to 38%. Complete but unofficial results show 13,025 of 21,046 voters rejected the tax increase.

In many northwest Little Rock precincts, supporters of the tax were swamped by the opposition. The outcome was largely the same in several of the precincts with the highest overall voter turnout.

In Precinct 70, with its polling place at Pleasant Valley Church of Christ off Rodney Parham Road, 323 people voted against the tax and 97 voted for it.

In Precinct 107, with the polling place located at Calvary Baptist Church, the "against" votes carried, 284 to 179.

And in Precinct 91, with its polling place at Cammack Village City Hall, "against" votes were 223 compared with 117 "for" votes.

In downtown Little Rock's Precinct 114, with the polling location at the Historic Arkansas Museum, the "for" votes carried but "against" votes were not far behind, 157 to 124.

Across the board, turnout as reflected by each precinct's share of registered voters who participated in the referendum appeared to be lower for the precincts in which supporters of the tax increase carried the day.

Before he was relieved of his duties earlier this month, Shawn Camp, interim director of elections for the county election commission, said in July that he expected between 6,000 to 11,000 voters in the special election.

Nevertheless, turnout did not reach the level seen in the Dec. 2018 mayoral runoff election in which Scott beat lawyer Baker Kurrus. Nearly 39,000 people voted in that contest.

During the runoff, Kurrus, who received 16,282 votes, or 42%, won swaths of the city's west and northwest, plus parts of the Heights neighborhood, the Arkansas Democrat-Gazette reported at the time.

On Tuesday night, Vice Mayor Lance Hines, the Ward 5 representative on the city board and a leader of an opposition ballot committee called "Responsible Taxation for Little Rock," said he was with volunteers and supporters of the committee at Sauced Bar and Oven, eating some food and drinking a few beers while they watched the results.

Early and absentee results showed the "against" votes ahead, and Hines said they were pretty confident they had gotten their people to the polls early. The sentiment carried on through that, he said.

He described the result as "a little bittersweet victory."

"I mean, I would've much rather have really worked on something that would have had widespread support -- not only from the [city] board but from the city as a whole," Hines said.

"I just think the voters realized that there was not enough specificity. The priorities were wrong in it -- you know, very different from what we did 10 years ago," Hines said.

In a statement on Tuesday night, Scott thanked the residents who campaigned for the tax with him and signaled he would take action on the expiring capital-improvement tax from 2011.

"In the weeks and months ahead I will continue to work closely with the Board and residents to make the necessary adjustments for the expiring 3/8th cent sales tax," Scott said in the statement.

Representatives for Scott did not make the mayor available for a phone interview Wednesday.

Mayoral spokeswoman Stephanie Jackson did not immediately respond to emailed questions regarding whether Scott plans to ask the board to call another election to have voters approve a 10-year extension of the three-eighths percent capital-improvement tax before the end of the year, nor did she indicate when such an election might take place.

Asked his thoughts on a potential renewal of the capital-improvement sales tax, Hines indicated he believed "it's what we should've been doing in the first place."

But he cited two other upcoming tax referendums, one for the Little Rock School District and another for the Central Arkansas Library System. Those elections will take place Nov. 2 and Nov. 9, respectively.

Additionally, Hines said the capital projects associated with the three-eighths percent tax have been funded. They are to be completed by the end of the year and the city has the money to finish them into 2022 if they are not finished, he said.

"So this whole notion that we're going to have to have cutbacks and all this stuff, we never were going to have any stuff go past the end of the year anyway with the three-eighth cent," he said.

Hines said the only proposal he would support is "a complete redo of what we did with the three-eighth cent," and recounted how the money was used to fund police infrastructure and a firehouse as well as parks and zoo improvements, with remaining dollars split equally among the wards in addition to some citywide projects.

"We've done a lot with that three-eighth cents, and why we couldn't do it again is beyond me," Hines said. "And I won't support any structural changes to the way we did it."

The vice mayor went further, saying he would not support any talk of a sales-tax renewal until the issues in the police department surrounding the leadership of Chief Keith Humphrey have been addressed.

In a statement issued Wednesday, at-large City Director Antwan Phillips -- the board's newest member and a mayoral ally who consistently supported the push for the sales-tax increase -- expressed his disappointment with the outcome.