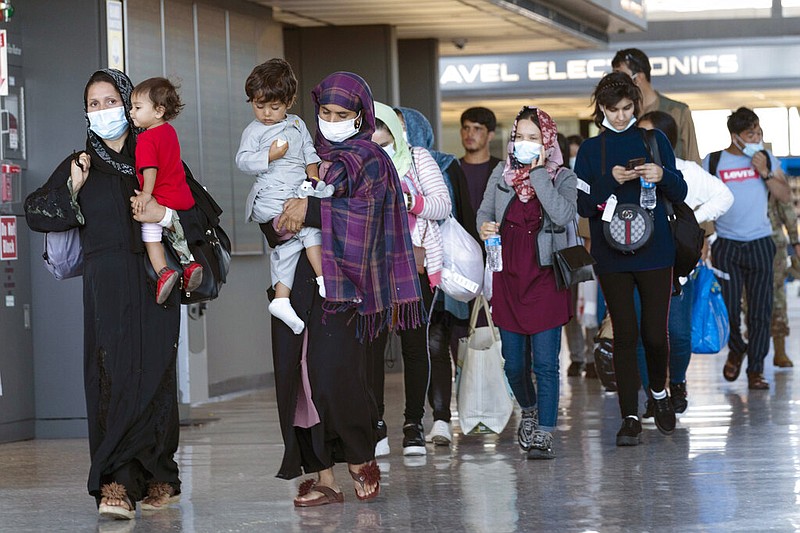 Families evacuated from Kabul, Afghanistan, walk through the terminal before boarding a bus after they arrived at Washington Dulles International Airport in Chantilly, Va., on Friday, Sept. 3, 2021. (AP/Jose Luis Magana)

Arkansas is expected to receive more than 90 Afghan evacuees in the coming weeks.

The White House on Wednesday began notifying governors and state refugee coordinators across the country about how many Afghan evacuees from among the first group of nearly 37,000 arrivals are scheduled to be resettled in their states.

Shealyn Sowers, director of communications and spokeswoman for Gov. Asa Hutchinson's office, said Arkansas will receive up to 98 refugees.

Hutchinson said in a news release that his office is still waiting on specific information, but “I have been briefed on the heightened security vetting and comprehensive health screenings, intake, and vaccinations that are being implemented by our federal partners. We are expecting Afghan refugees in the near future with more coming as they are assigned to the resettlement agencies in the state by their national parent organizations.”

Hutchinson said refugee relocation is being assisted by faith-based organizations and local sponsors so that the evacuees will successfully be integrated into life in Arkansas.

“These refugees have supported the United States over the past 20 years,” he said. “We want to help relocate these allies for their protection and the protection of their families from the sure peril they will face if they remain in Afghanistan.”