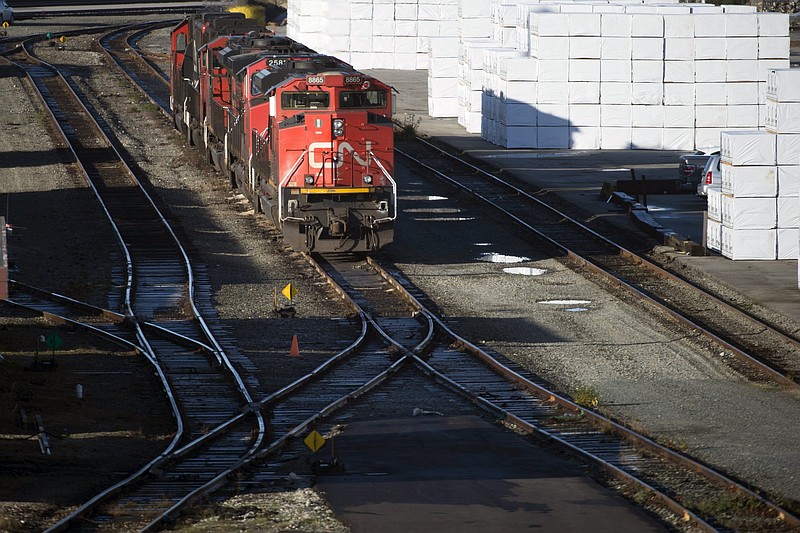 OMAHA, Neb. -- After initially getting derailed this spring, Canadian Pacific's acquisition of Kansas City Southern is back on track after Canadian National dropped out of the bidding Wednesday.

The deal, which would create the first railroad spanning the U.S., Canada and Mexico, could still face tough scrutiny from regulators at the federal Surface Transportation Board, which hasn't approved any major railroad mergers since the 1990s, but Kansas City Southern shareholders will be set to get paid once shareholders of both companies and Mexican regulators approve it regardless of what the Surface Transportation Board ultimately decides.

The companies valued the cash-and-stock deal at $31 billion including the assumption of debt.

"We're elated," said Keith Creel, Canadian Pacific's president and chief executive. "No dull moments obviously, but it came to a conclusion where we intended it to in the beginning and believed it ultimately would end up."

Canadian Pacific triumphed in the bidding war even though it offered less than Canadian National's $33.6 billion bid because federal regulators wouldn't let Canadian National set up a voting trust to acquire and hold Kansas City Southern during their prolonged review.

Canadian National won't walk away empty-handed. Kansas City Southern is paying its jilted suitor a breakup fee of $700 million for ending their agreement and will refund the Canadian carrier an additional $700 million that it had paid the U.S. railroad for killing the spring Canadian Pacific deal. Canadian Pacific will reimburse Kansas City Southern for those breakup fees under the terms of their deal.

The bidding has gone back and forth since Canadian Pacific and Kansas City Southern first announced their merger agreement in March.

Canadian National chief executive J.J. Ruest said his railroad will focus on "profitable growth and opportunities for excellence." Canadian National had faced pressure in recent weeks from a major investor to abandon the deal and work on its own performance.

The London TCI fund, which owns about 5% of Canadian National's stock, already has announced plans to call a special meeting to nominate four new directors who would help choose a new CEO for the railroad. A TCI spokesman said it will still push for leadership changes.

Shares of all three railroads were up after Wednesday's announcements with Canadian National posting the biggest gains with its stock closing 2% higher. Kansas City Southern shares closed up 0.5% and Canadian Pacific's shares were up almost 1%.

For more than two decades, the railroad industry has been stable, with two railroads in the Western United States -- BNSF and Union Pacific -- two in the Eastern United States -- CSX and Norfolk Southern -- Kansas City Southern in the Midwest and the two Canadian railroads that serve part of the United States. Regulators have said that any merger involving two of the largest railroads generally needs to enhance competition and serve the public interest to get approved.

The only recent deal involving one of those major railroads is the 2010 purchase by Warren Buffett's Berkshire Hathaway of BNSF, but that deal faced less scrutiny because it wasn't a merger of two rivals.

Creel said he expects the Surface Transportation Board will work to protect competition and the public interest when it reviews Canadian Pacific's acquisition of Kansas City Southern, but he believes the deal will meet those standards easily because there is little overlap between the two railroads and plenty of potential benefits.

"I do not expect regulatory problems getting this deal approved," Creel said.

Edward Jones analyst Jeff Windau agreed about the relatively straightforward regulatory review, but added that it will be interesting to see what sort of concessions Canadian Pacific and Kansas City Southern might have to make to address concerns raised by competitors and shippers.

Kansas City Southern made an attractive acquisition target because it was the smallest of the major railroads and the only one with direct lines into Mexico, so the new combined railroad will benefit from expanding trade across North America under the new trade agreement Canada, Mexico and the United States all signed.

Kansas City Southern's president and CEO, Patrick Ottensmeyer, who is in Mexico City to help move the process along, said the deal will "benefit KCS and our employees by enabling us to become part of a growing and truly North American continental enterprise."

The new railroad also will be well-positioned to benefit from companies deciding to move some of their manufacturing closer to their end markets in North America instead of relying so heavily on global suppliers.

"Railroads are such a critical part of the backbone of supply chains. and this is going to be a very unique franchise to drive some of those investment decisions," Ottensmeyer said.

The heads of both railroads don't expect this deal to lead to more consolidation in the industry partly because the combined Canadian Pacific-Kansas City railroad will still be the smallest of the major railroads even though it will include roughly 20,000 miles of track and employ about 20,000 people.

"We are going to uniquely create a historic network through all three countries that won't be replicated," Creel said. "I think it stabilizes the network. It creates competition west of the Mississippi, east of the Mississippi and in Canada. It puts us at a level playing field."

Information for this article was contributed by Josh Funk of The Associated Press and by Thomas Black and Scott Deveau of Bloomberg News (WPNS).