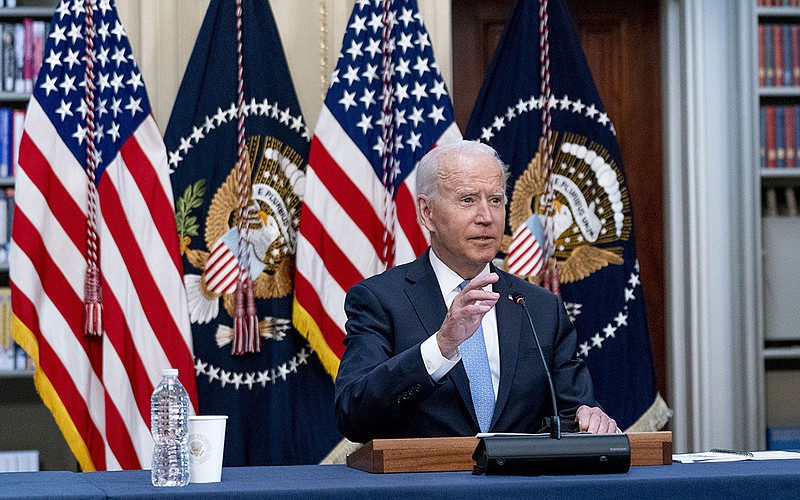 President Joe Biden speaks during a meeting with business leaders on the government’s covid-19 response Wednesday in the library of the Eisenhower Executive Office Building near the White House. Biden said that the subsidies in his covid-19 relief law have helped trim premiums for new and existing enrollees of the Affordable Care Act plans. (AP/Andrew Harnik)

He called that number encouraging and urged Congress to keep the trend going by extending the more generous financial assistance. This and other subsidy expansions are to last two years unless extended by Congress.

"That's 2.8 million families who will have more security, more breathing room, and more money in their pocket if an illness or accident hits home," Biden said in a statement.

The enrollment tally -- along with a raft of figures illustrating that such health plans are affordable for many people -- was released as the president is pressing Congress to make permanent a temporary upgrade in federal subsidies for Affordable Care Act plans that began early in the spring as a provision of a pandemic relief law.

The additional participants push the enrollment in Affordable Care Act health plans to 12.2 million, the highest level since 2014, when the insurance marketplaces that were created under the law first offered plans. That's an increase of about 20% since the end of last year.

Biden had ordered the healthcare.gov marketplace to reopen Feb. 15 for six months, through Aug. 15, to give uninsured people another opportunity to sign up for coverage for themselves and their families during the pandemic. New census numbers show that about 28 million people were uninsured last year, but the steep coverage losses that many feared were averted as about 9 in 10 Americans retained private or public coverage.

Healthcare.gov plans became significantly cheaper this April because of enhanced subsidies in the covid-19 relief law. All the while, coverage through Medicaid and the Children's Health Insurance Program also has been growing, reaching more than 82 million people.

Before the Biden administration threw the doors wide open, consumers had been allowed to sign up outside the regular, yearly enrollment time only if they had a substantial change in their life, such as a birth, a move or a job loss. Under President Donald Trump, who opposed the health care law, officials tightened the rules.

The enrollment report, compiled by the Department of Health and Human Services, shows that in three dozen states relying on the federal insurance marketplace healthcare.gov, sign-ups were nearly three times greater than the number during special enrollments last year and almost four times greater than in 2019.

Even before Biden created the six months of special enrollment, Americans who became unemployed during the pandemic would have qualified to enroll, but administration officials have pointed out that such people would have needed to apply for permission and that many did not know they could ask.

Wednesday's report shows that 2.1 million people signed up for new coverage in those states that use HealthCare.gov. In addition, more than 700,000 signed up in 15 states that run their own marketplaces under the Affordable Care Act. Some of the state-run marketplaces had opened their doors in 2020, soon after the pandemic began, and several have continued.

The Obama-era Affordable Care Act, enacted in 2010, is aimed at increasing health coverage by offering subsidized private insurance nationwide for people who do not get health care benefits from their employers. The law also expanded Medicaid for low-income adults, and most states have taken advantage of that option.

Together, the two components cover about 27 million people, according to the nonpartisan Kaiser Family Foundation.

Enrollment in Affordable Care Act health plans has never been as high as was predicted at the outset, when government forecasts anticipated that within a few years, 24 million people would buy their insurance through the marketplaces. But Biden has been pressing to extend the reach of the marketplaces -- and to draw attention to the effects of his efforts.

Biden said Wednesday that the subsidies in his relief law have helped trim premiums by about $67 a month for people who were already enrolled in Affordable Care Act plans, and that 4 in 10 new customers during the special sign-up window found coverage for $10 a month or less.

Out-of-pocket expenses have also dropped, he said, with the median deductible slashed 90%. That means people pay less when they actually go to use their health insurance at the doctor's office or the hospital.

"The key takeaway is that when you make coverage affordable, people will buy it," Chiquita Brooks-LaSure, head of the Centers for Medicare and Medicaid Services, the agency that runs healthcare.gov, said in an interview. There was an upward bump in enrollment in April, when the increased financial aid became available.

Brooks-LaSure acknowledged Wednesday that enrollment never has met the original predictions. "The ACA over the last decade has really been under attack by many, and that has had an effect," she said in an interview. "So in investing in outreach, we are ... reaching communities that still don't know whether coverage is available."

"The more people are educated about their options, the more likely they are to enroll in coverage," Brooks-LaSure said.

The administration used the figures released Wednesday to highlight that the decision to open the marketplaces this year has fostered the president's goal of helping to insure racial and ethnic groups hit hardest in the pandemic. The proportion of Black and Hispanic people who signed up for health plans appears to have been a bit greater than through the limited special enrollments of the past two years, although health officials note that a significant share of the people who purchased plans did not identify their race or ethnicity.

The figures also show that the proportion of special enrollments among people with middle-class incomes remained small but rose from 2% last year to 7% during this year's six-month window. For the first time, the upgraded Affordable Care Act subsidies allowed tax credits for people with incomes above 400% of the poverty level -- about $51,000 for a single person, or $106,000 for a family of four.

That change ended years of complaints that the plans were unaffordable for people with such incomes because the subsidies were not available to them.

And Biden is urging Congress to build on the law as Democratic lawmakers are debating health care changes and other safety-net expansions through a budget reconciliation process.

His $3.5 trillion domestic agenda bill calls for making permanent the richer subsidies for healthcare.gov plans and provides a workaround to help more than 2 million low-income uninsured people denied coverage in a dozen states that have failed to expand Medicaid.

The legislation, which faces uncertain prospects, would also free Medicare to negotiate prescription drug prices, plowing expected savings back to provide dental, vision and hearing coverage for older people. The bill also calls for a pivot to long-term care services in the home, and an expansion of maternal health coverage for low-income women.

The law survived a decade of Republican efforts to repeal it or get the Supreme Court to strike it down. The law was one of Trump's top targets, but it has now has joined Medicare, Medicaid, and Children's Health Insurance as a permanent component of government programs providing coverage to nearly 145 million people.

The regular annual sign-up season for healthcare.gov plans is set to begin Nov. 1. It won't be the low-key affair that it was under the Trump administration, when the government kept the website running smoothly but didn't do much to promote enrollment. Brooks-LaSure said her agency is planning a big push this fall, with about $80 million allocated among some 1,500 groups to help consumers enroll.

Information for this article was contributed by Darlene Superville and Ricardo Alonso-Zaldivar of The Associated Press and by Amy Goldstein of The Washington Post.