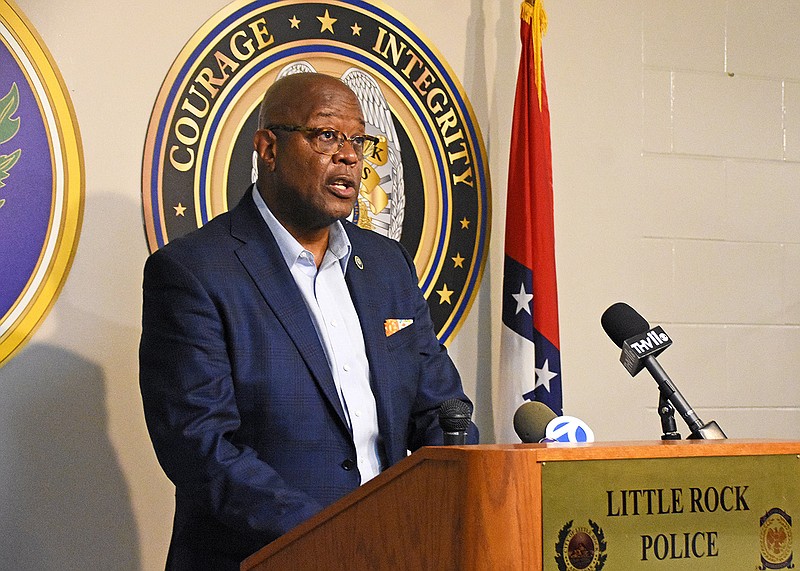 A federal judge has dismissed a lawsuit filed last year by Little Rock Police Chief Keith Humphrey against a police union and several of his officers.

Mike Laux, a Chicago attorney representing Humphrey, said the complaint was dismissed without prejudice, meaning it can be refiled.

"After all, the statute of limitations has not even run on any of the defendants or the city of Little Rock," said Laux. "The point is that this cause of action remains entirely viable, and so it goes without saying that every defendant that was brought into this case was brought into the case in good faith. The elephant not in the room is the city of Little Rock. The reason is not the lack of a meritorious claim against the city a year ago or at this very moment. Rather it was the chief's loyalty to the city."

In his lawsuit, Humphrey claimed there was a conspiracy against him because he planned to overhaul the department.

Laux said Humphrey embraced "the Obama-era notion of 21st-century policing," which includes less use of force and more rigorous oversight of use of force.

Humphrey claimed First Amendment free-speech retaliation by the Fraternal Order of Police and two officers who had served as interim chief, Alice Fulk and Hayward Finks, according to Moody's order, summarizing the facts of the case.

"Chief Humphrey alleges that he engaged in protected activity as a private citizen when, prior to his employment with the City of Little Rock, he expressed his policing philosophy," wrote Moody. "Chief Humphrey contends that the Defendants oppose his policing philosophy and in retaliation engaged in various instances of adverse employment acts in an effort to coerce him to leave his position or otherwise obtain his termination."

But Humphrey's speech wasn't protected under the First Amendment because at the time he was the police chief in Norman, Okla., wrote Moody.

Humphrey was hired to be the Little Rock chief in March 2019.

"Chief Humphrey's speech was not protected by the First Amendment because at the time he made the statements which he claims are protected, he was acting as a public employee making statements pursuant to his official duties," wrote Moody, citing case law.

For the same reason, Humphrey's claims of equal protection under the Fifth and Fourteenth amendments also fell flat, according to the judge.

"Chief Humphrey's speech was made as a public employee," wrote Moody. "The class of one theory of equal protection does not apply."

Regarding Humphrey's claims of a civil-rights conspiracy, Moody wrote: "Because Chief Humphrey has not adequately shown any underlying constitutional violations, his civil conspiracy claim must also fail."

Having dismissed all federal claims, Moody declined "to exercise supplemental jurisdiction over the remaining state-law claims" regarding abuse of process and defamation or libel.

When contacted late Wednesday afternoon, Humphrey referred the Democrat-Gazette to Laux for any comment.

It was Humphrey's counterpunch in a legal battle that pitted the chief against two of his three assistant chiefs and several officers.

The litigation stems from the fallout surrounding a fatal shooting of a Black man, Bradley Blackshire, by a white Little Rock officer in 2019. The lawsuits targeting the chief say that he retaliated against his staff and their departmental allies because police officials testified to a city commission that an internal investigation into the shooting was rushed.

Named in the lawsuit were 21 people, including two assistant chiefs, Fulk and Hayward Finks; former officer Charles Starks, who shot Blackshire in February 2019, which led to Starks' firing and being reinstated by a judge; a series of executive board members of the police union; Russ Racop, a blogger critical of the Police Department; and Shella Atlas-Evans, a city human resources official.

Also named in the suit are the Little Rock Fraternal Order of Police and WatchGuard Video, the Police Department's provider of body cameras owned by Motorola Solutions Inc.

Seven defendants, including Atlas-Evans and Racop, were dismissed because they were not served in a timely manner, according to a January order from Moody.

Humphrey filed a subsequent motion that resulted in the voluntary dismissal of Motorola Solutions, according to Wednesday's order.

In his original lawsuit, Humphrey claimed that Racop, the Fraternal Order of Police and Starks defamed him. He claims that the union violated his civil rights by campaigning to remove him.

He claims that five of his deputies -- Hayward Finks, Fulk, Christina Plummer, Duane Finks (Hayward Finks' brother) and Reginald Parks, all of whom have previously sued Humphrey -- abused the legal process with baseless allegations meant to force him out. Parks was one of the seven who were dismissed as defendants in Humphrey's lawsuit.

Some of the individuals Humphrey named in the lawsuit have subsequently left the department.