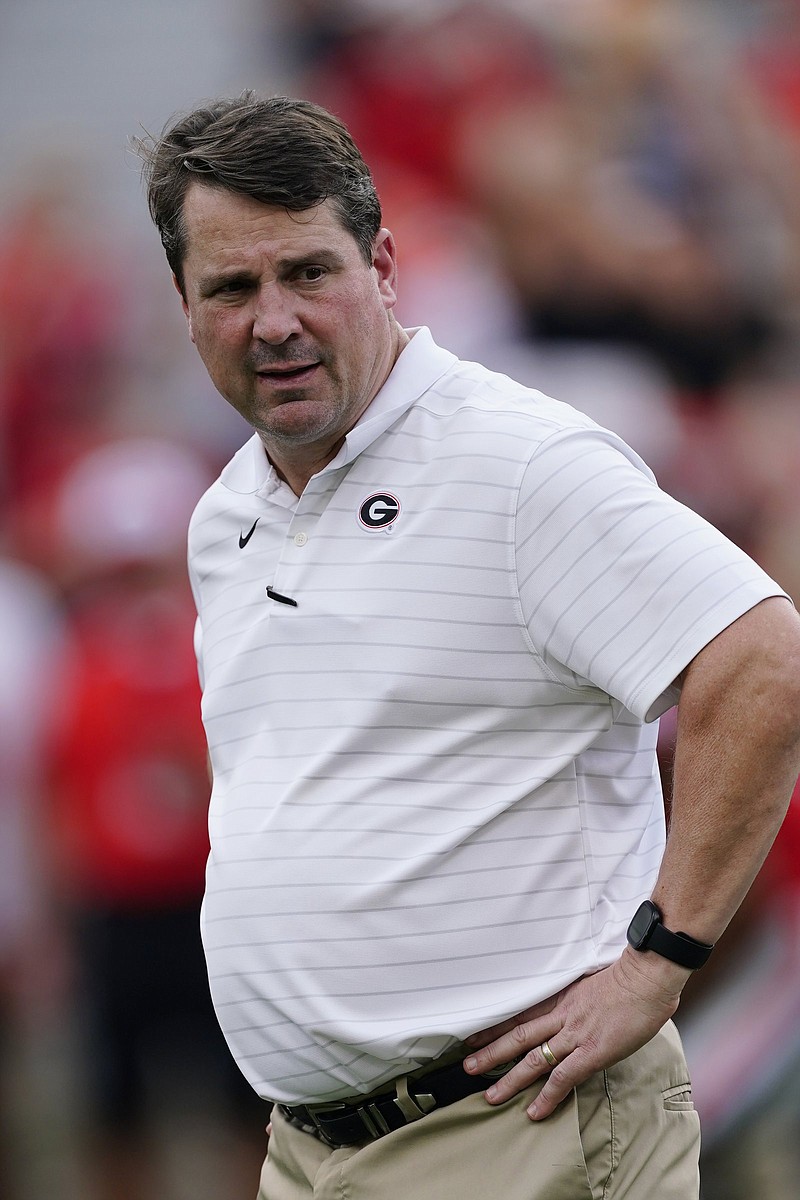 Will Muschamp, who played at Georgia, is in his first season as the Bulldogs’ special teams coordinator. On Saturday, the second-ranked Bulldogs take on South Carolina, where Muschamp was the head coach for five seasons before being fired with three games remaining last season. (AP/John Bazemore)

Georgia assistant coach Will Muschamp is preparing to face his former SEC team.

"He's had this situation a lot before, because he's been all over the SEC," Georgia Coach Kirby Smart said. "It's not new to him that's for sure. I know he'll handle it well."

The Bulldogs are playing Saturday night at home against South Carolina, where Muschamp was head coach the previous five seasons.

At South Carolina he faced Florida -- where he was the coach for four seasons -- on an annual basis.

Muschamp, who played at Georgia, began his coaching career as a graduate assistant at Auburn -- one of the Bulldogs' biggest rivals. When he became an assistant at LSU, he faced Auburn.

Muschamp later had two stints as a defensive coordinator at Auburn, where he faced Georgia and LSU every season.

Muschamp, who was fired at South Carolina with three games left last season, initially joined Smart's staff at Georgia as a defensive analyst. He was promoted to special teams coordinator before the season when Scott Cochran took a leave of absence for health reasons.

Despite Muschamp's familiarity with many of South Carolina's players, Gamecocks Coach Shane Beamer said his presence on the Bulldogs' staff won't have a major impact on game-planning.

"And that's no disrespect to Will," Beamer said. "None of the schemes are alike, what we're doing here this year as opposed to last year.

"He's got more of a familiarity with our team than I do Georgia's. But there's some guys on Georgia's team from when I was there."

Beamer, who was a Georgia assistant coach from 2018-20, said Muschamp was helpful with the transition at South Carolina.

"I talked to him a couple of times, when I initially got hired and then in January we talked about some different things," Beamer said. "He's someone I have a ton of respect for, and I know he's doing a phenomenal job for Kirby over there in Athens."

"I think people outside of our conference obviously get sick of hearing about it, because there's a lot of chatter nationally about it, but it's one thing to view it from the outside until you strap it on and play these teams each and every week," Stoops said. "It's quite another to see it from the inside."

The Longhorns, who along with Oklahoma will join the SEC no later than 2025 and possibly earlier, came into the game ranked No. 15. But Texas was manhandled physically by the unranked Razorbacks, who are No. 20 in The Associated Press poll this week in Sam Pittman's second season as coach.

"That's one heck of a win for Sam, so congratulations to him," Stoops said. "And it really doesn't surprise me, because of the way he recruits and the way he's going to build it with the big boys. It starts up front in this league.

"We don't play Arkansas this year so I haven't had a chance to study them, but obviously they've made quite a bit of progress."

Missouri faces Southeast Missouri State on Saturday, and as a reminder of the possible dangers related to playing an FCS opponent, Tigers Coach Eli Drinkwitz had a list of the seven FCS teams that have beaten FBS teams this season posted in every player's locker.

Most shockingly, Jacksonville (Ala.) State won 20-17 at Florida State last week on a 59-yard touchdown pass on the game's final play. East Tennessee State won 23-3 at Vanderbilt to open the season.

One of the more infamous FCS upsets of an FBS team happened in 1992 -- back then the divisions were called I-AA and I-A -- when The Citadel beat Arkansas 10-3 in Fayetteville.

Drinkwitz was 9 years old at the time and living in Alma.

"I remember how big of a shock and disappointment it was to the state of Arkansas and to the proud program, and the changes that immediately happened because of that," Drinkwitz said.

Arkansas Athletic Director Frank Broyles fired Jack Crowe as coach the day after the game -- which was the Razorbacks' first since joining the SEC -- and promoted defensive coordinator Joe Kines to interim coach.

Crowe later was on the winning end of an FCS upset when his Jacksonville State team won 49-48 in double overtime at Ole Miss in 2010. Houston Nutt, the Little Rock native and former Razorbacks coach, was coaching the Rebels.

There were 363 former SEC players on opening day NFL rosters last week according to the conference office. That was up from 356 last season.

Arkansas ranks 13th among the 14 SEC schools with 15 players on NFL rosters.

South Carolina and Texas A&M each have 24 players on NFL rosters, Auburn 23 and Mississippi State 20. Kentucky, Missouri Ole Miss and Tennessee each have 18 and Vanderbilt has 14.

Before Texas A&M opens SEC play against Arkansas next week, sophomore quarterback Zach Calzada will make his first start for the Aggies when they host New Mexico on Saturday.

Calzada is taking over as the starter because Haynes King underwent surgery Sunday to repair a broken bone in his right leg after being injured against Colorado.

The Aggies struggled on offense without King, but Calzada connected with Isaiah Spiller on an 18-yard touchdown pass with 2:41 left to rally Texas A&M to a 10-7 victory in Denver.

"I'm not a doctor and I'm not going to say when," Fisher said this week about when King might be able to play again. "When you heal, you heal. When you're healed, you're healed and we would never play him in any way, shape or form before that."

Calzada completed 18 of 38 passes for 183 yards without an interception and rushed 4 times for 28 yards against the Buffaloes.

"Hopefully, he'll have a really good outing," Fisher said of Calzada starting against New Mexico. "We need to play well around him and need to take care of him and allow him to do his thing and play his game.

"I think he's very knowledgeable of what we do. He can reach all parts of the field with his arm. He can throw the football anywhere. He's very accurate.

"At the the same time, he's very good athlete. ... He had a couple really nice scrambles [against Colorado]. He can create plays with his legs."

Kevione Faulk, the daughter of LSU running backs coach Kevin Faulk, died Monday morning. She was 19, and no cause of death has been released.

Tigers Coach Ed Orgeron said he doesn't expect Faulk, an All-American at LSU who played 13 season in the NFL with the Patriots, to be at Saturday game when LSU plays Central Michigan.

Kevione Faulk was a student worker with the LSU football program, as are two of Orgeron's sons.

"Everyone here is sick to their stomach," Orgeron said. "We feel so bad for Coach Faulk. He is a great family man."

Ole Miss Coach Lane Kiffin can empathize with what Clay Helton is going through after being fired as USC's coach on Monday following the Trojans' 42-28 loss at home to Stanford to fall to 1-1.

Helton was an assistant coach for Kiffin and Steve Sarkisian at USC before succeeding Sarkisian.

"I feel for Clay," Kiffin said. "Clay's a great person and I think everybody knows that.

"I can relate to being fired early in the year from there, but just in general for him to be fired after two games, that's a long season to sit around."

Florida will attempt to become the first SEC East team to beat Alabama since 2010 when the Gators play host to the Crimson Tide at The Swamp on Saturday.

Alabama has won 31 consecutive games against East teams, including 52-46 against Florida in last year's SEC Championship Game, since the Crimson Tide lost 35-21 at South Carolina on Oct. 9, 2010.

The Tigers didn't have to use Bigsby too much in the first two games when they pounded Akron and Alabama State.

Bigsby had 24 carries for 241 yards -- a hefty 10.0-yard average -- so he should be fresh for Auburn's first major test of the season when the Tigers play at Penn State on Saturday.

The Tigers need a strong running game, led by Bigsby, to keep the pressure off quarterback Bo Nix.

LINE Alabama is favored by 15 points.

Alabama makes a rare visit to The Swamp for a rematch of last year's SEC Championship Game, which Crimson Tide held on to win 52-46. The Tide are playing at Florida for the first time since 2011, when Alabama won 38-10.

Both teams have undergone a lot of personnel changes since last year's high-scoring matchup, but the Tide and Gators are still loaded with talent.

Florida Coach Dan Mullen is looking for his first victory over Alabama. He's 0-10, including 0-9 when he was Mississippi State's coach.

Georgia Southern at No. 20 Arkansas

South Carolina at No. 2 Georgia

"If you need me to motivate you to play in this game, then you're a little messed up."

"Be a guy that embraces that. Enjoy the opportunity to play in somebody else's house and to go in there and play good football." 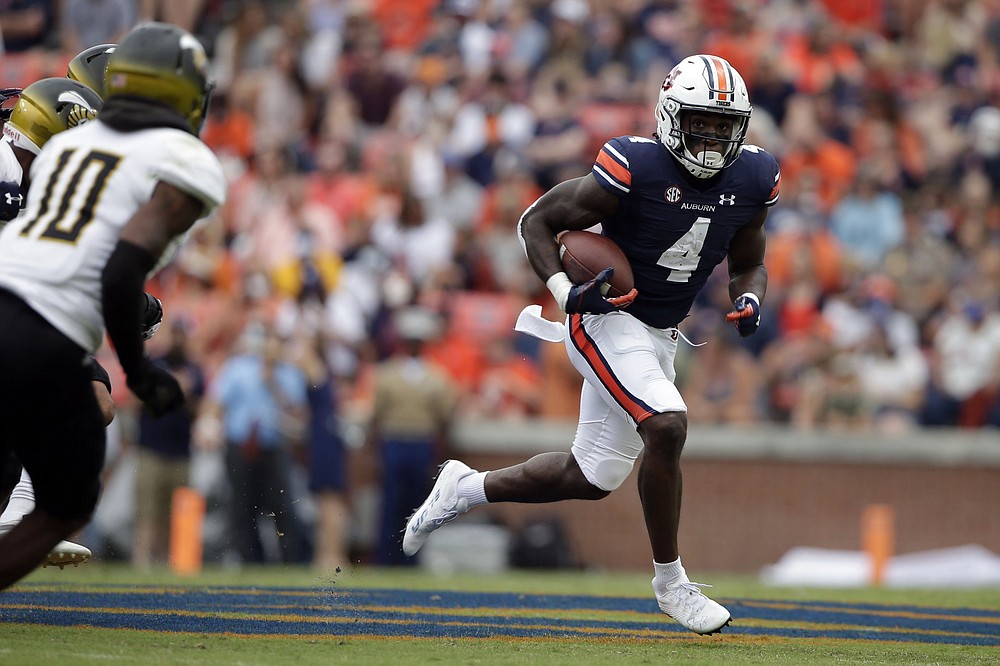 Auburn running back Tank Bigsby (4) carries the ball against Alabama State during the first half of an NCAA football game Saturday, Sept. 11, 2021, in Auburn, Ala. (AP Photo/Butch Dill) 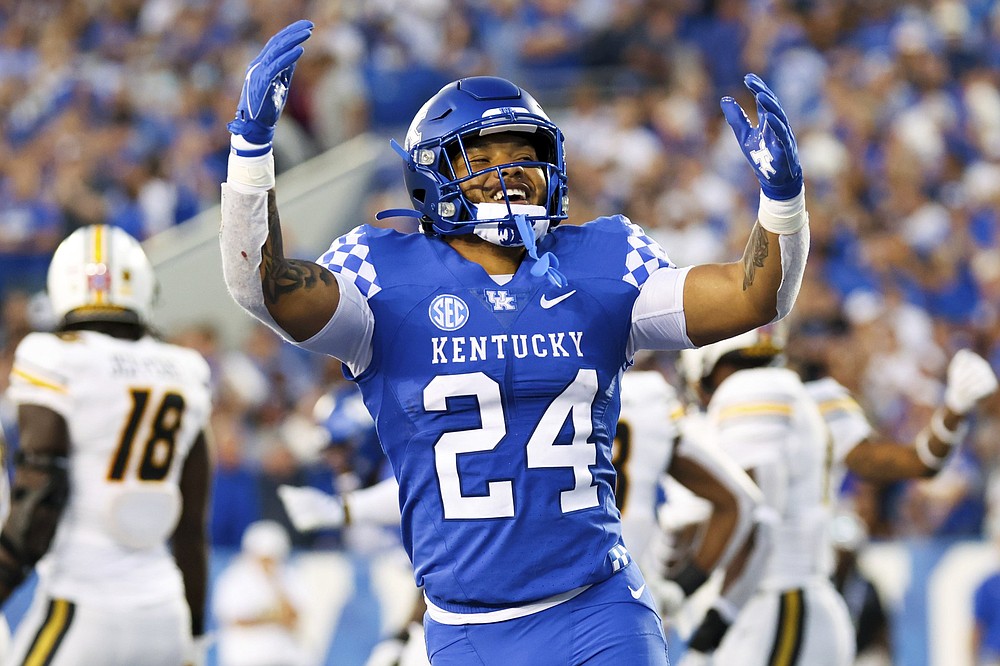 Kentucky running back Chris Rodriguez Jr. leads the SEC and ranks second nationally with an average of 166.0 rushing yards per game. (AP/Michael Clubb)