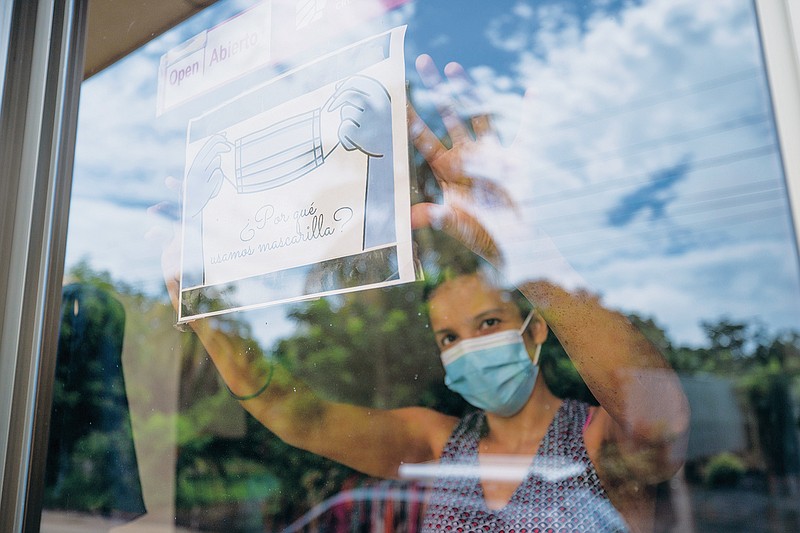 A clothing store worker poses next to a sign encouraging the use of a masks during the COVID-19 pandemic at the entrance to the store in Managua, Nicaragua, Thursday, Sept. 9, 2021. (AP Photo/Miguel Andres)

MEXICO CITY -- Other countries have lured doctors out of retirement, pushed medical students to the front lines and buoyed medical personnel exhausted by covid-19 cases, but in Nicaragua doctors have been harassed, threatened and sometimes forced into exile for questioning official handling of the pandemic.

Vice President Rosario Murillo, who is also the first lady, has accused doctors of "health terrorism" and of spreading "false outlooks and news" by reporting that covid-19 has been far more widespread than officials acknowledge.

As international health organizations warn of increasing infections in Nicaragua and independent Nicaraguan doctors call for a voluntary quarantine to slow the spread of the delta variant of the coronavirus, the government has made clear that comments out of step with its line are unacceptable as President Daniel Ortega seeks a fourth consecutive term.

Groups of doctors report much higher numbers than the government of virus infections and deaths from covid-19, the disease that can be caused by the coronavirus. And they have criticized the Sandinista government for promoting mass gatherings.

Dr. Leonel Arguello, a physician who also is one of the country's most prominent epidemiologists, recently fled Nicaragua after months of harassment and threats.

Arguello maintains his own tally of medical workers who died of covid-19 and accuses the government of creating a false sense of security that has cost lives.

Arguello, who worked for the Health Ministry during the first Sandinista government, said he had ignored death threats but said he sensed a change when Murillo spoke publicly about doctors inventing things and made clear the government would not continue tolerating it.

"My role as a health educator was going to be lost if they imprisoned me or silenced me," he said.

In comments that appeared directed toward Arguello and other doctors in exile, Murillo said this month that "to carry out terrorism with health topics is a sacrilege, it is a crime."

Questions sent to the vice president about the alleged intimidation of doctors elicited a thank you note from Murillo, but no additional comment.

It is not clear how many doctors have left the country during the pandemic, but The Associated Press identified at least five who left because they felt government intimidation. "I think it's a decision you take when you feel your physical safety is compromised," Arguello said.

In early July, Murillo spoke of "fake doctors" giving "false predictions and false surveys" about the pandemic. "In life everything has a cost and if we cause harm, harm will come to us, we shouldn't expose ourselves to receive the consequences," she said on national television.

Around that time, urologist Jose Luis Borgen was called into the Health Ministry and told to stop providing pandemic statistics different from the official numbers. He said he knows of about a dozen doctors who were summoned and told the same.

"They accuse us of giving false news and generating fear in the people," Borgen said. One doctor was told his medical license could be revoked and he could be charged with spreading false information. Borgen said he believes that doctor is no longer in Nicaragua.

Borgen was also summoned to the Attorney General's Office about treatment he had given an opposition politician sought by authorities. He said he viewed that as an attempt at intimidation.

"It's all linked," Borgen said. "When the vice president says something, the rest of the institutions execute it."

Borgen, who himself has been ill with covid-19, said that he did not know of any doctors who had had their licenses revoked or been charged with a crime, but that many had left the country fearing that could happen.

The government had already shown willingness to put political pressure on health workers. When big street protests broke out in April 2018 in response to a government change to the social security system, the government told public health workers to not treat injured protesters.

Those who disobeyed -- some 400, according to Arguello -- were fired. Others went into exile at that time.

The pressure has continued during the pandemic.

From the time Nicaragua started seeing its first coronavirus infections in March 2020, speaking of the pandemic was taboo. Wearing a surgical mask in hospitals became a political statement because administrators forbade hospital personnel from donning them. Masks could make patients nervous, they said.

Relatives and health workers reported secretive "express burials" of covid-19 victims by personnel in white protective suits under cover of darkness. La Prensa, Nicaragua's main newspaper, reported in July that a Managua funeral home had performed 14 such burials in 10 days with patients from three hospitals in the capital.

Nicaragua's health workers have been hit hard by the pandemic, too. At least 160 medical personnel have died from covid-19, statistics the government has not shared, according to Arguello. Borgen said Friday that 88 those of those who died were doctors.

A doctor in the northwestern city of Chinandega said physicians were unable to obtain coronavirus tests outside government hospitals -- and even those are strictly limited.

"They have it controlled and if someone in a given case tests positive they handle it discreetly," the doctor said. "They want to sell an image that the virus is controlled."

But she said her region was seeing a heavy load of cases, the local hospital ward devoted to covid-19 cases was full and a colleague who had been treating patients night and day died of the disease a month ago. She, too, spoke on condition of anonymity, fearing reprisals.

Dr. Eddy Valverde fled into exile in late June, weeks after the government began arresting prominent opposition leaders. He had faced months of threats and attacks on social media for speaking publicly about the government's handling of the pandemic. Journalists from government outlets had called for revocation of his medical license.

He said independent doctors have been the only source of reliable data about the pandemic. He is a member of the Nicaraguan Medical Unit, which was formed by doctors fired from public hospitals in 2018.

That organization, which provided free consultations to covid-19 patients, was forced to close its offices in July after months of harassment from police.

Another organization made up of activists and independent doctors called the Citizen Observatory has reported 20 times the number of covid-19 deaths -- more than 4,000 -- than the government's official number.

The government has been reporting one covid-19 death per week for the past nine months.

The Observatory called for Nicaraguans to join a "voluntary quarantine" during the month of September in the face of "the pandemic peak and collapse of the health system."

Nicaragua started limited vaccinations in April, and the nation of some 6.5 million people has vaccinated more than 520,000 adults older than 45, though it wasn't clear if they had received two does or only one. The president said Sept. 9 the government would begin vaccinating people over age 30 later this month.

Rather than impose restrictions to slow the virus' spread, the government encouraged mass gatherings and a continuation of life as normal despite warnings from local physicians and the Pan American Health Organization.

Arguello said he believes the government's attempts to muzzle him and other health workers aims to give the public a false sense of security.

"Those who started speaking out were fired, and that was the signal for everyone to stay quiet in the public sector," Arguello said.

Leaving Nicaragua was a difficult decision, Arguello said. In most cases, a doctor cannot quickly resume practice in another country. Arguello is still treating remotely 15 patients who are on oxygen at home.

"The apparent normalcy being sold is a false sense of security that keeps people from taking steps to protect themselves," Arguello said.

"We're worse every day, the numbers are rising," Arguello said. "The hospitals are full and everyone knows a relative or a neighbor with covid." 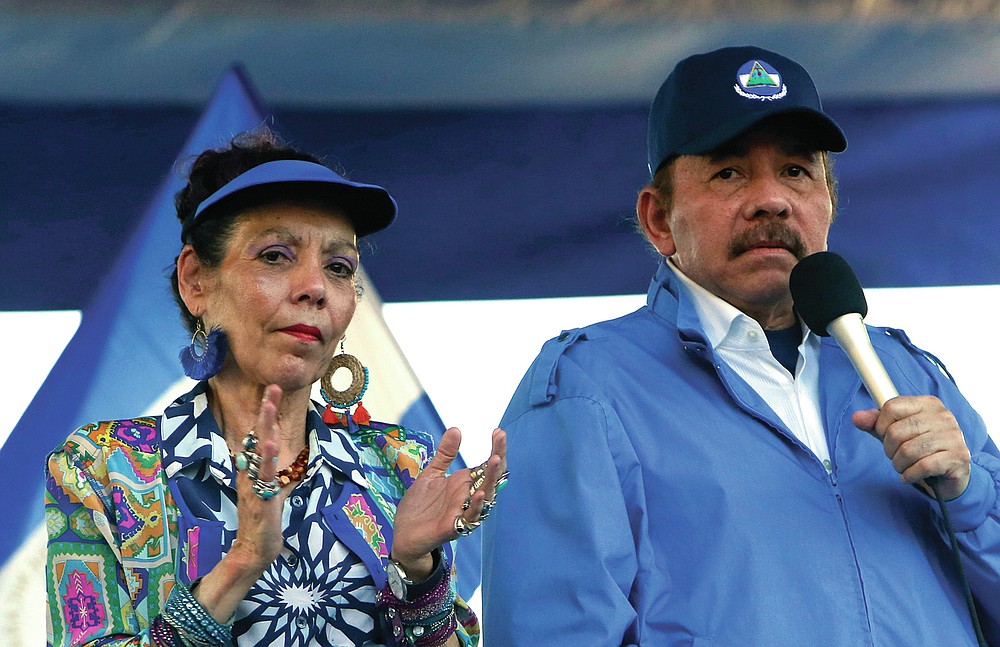 FILE - In this Sept. 5, 2018 file photo, Nicaragua's President Daniel Ortega and his wife, Vice President Rosario Murillo, lead a rally in Managua, Nicaragua. As international health organizations warn of increasing infections in Nicaragua and independent Nicaraguan doctors call for a voluntary quarantine to slow the spread of the delta variant, the government has made clear that comments out of step with its line are unacceptable as Ortega seeks a fourth consecutive term. Murillo has accused doctors of &#x201c;health terrorism.&#x201d; (AP Photo/Alfredo Zuniga, File) 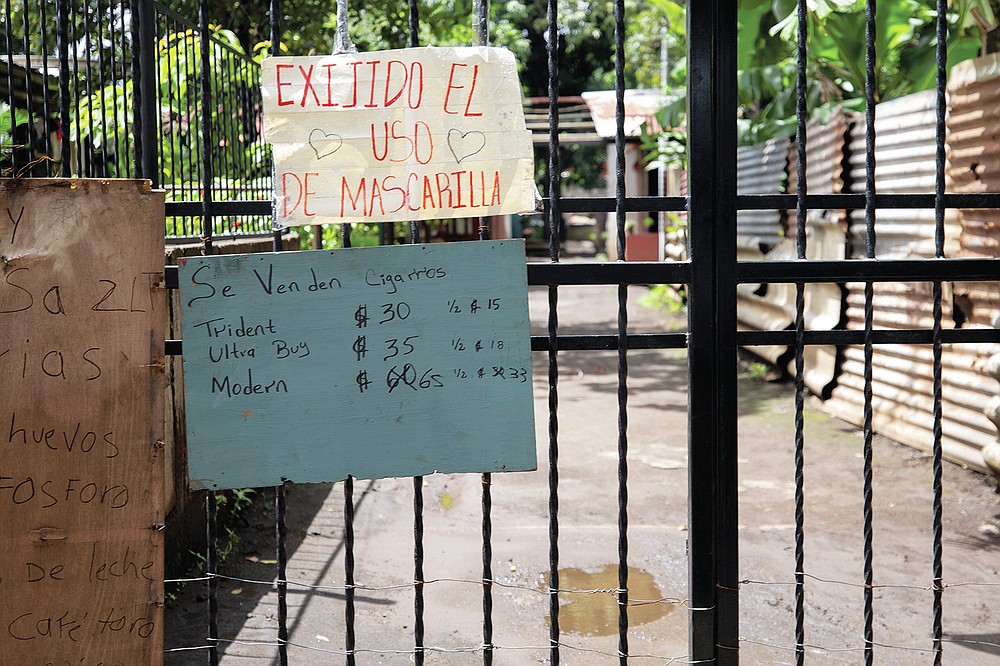 A sign requiring the use of masks during the COVID-19 pandemic hangs over signs advertising cigarettes, eggs, matches, milk and coffee for sale on a gate at the entrance to a residential area in Managua, Nicaragua, Thursday, Sept. 9, 2021. (AP Photo/Miguel Andr&#xe9;s) 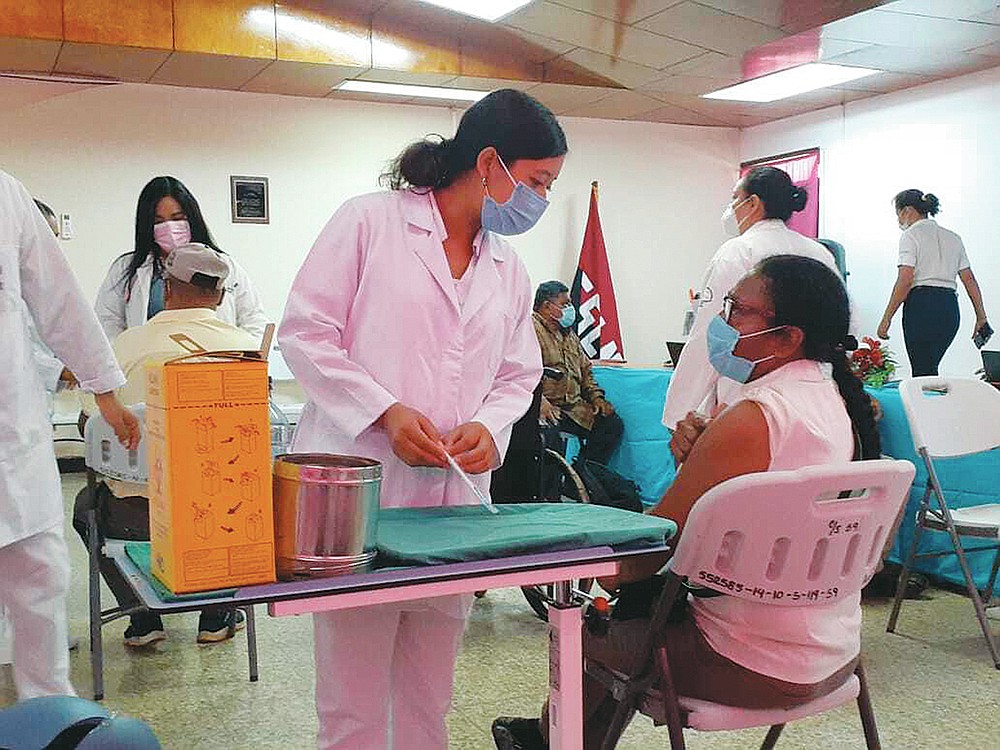 A nurse talks to a woman that is about to get inoculated with the AstraZeneca COVID-19 vaccine at the Berta Calderon hospital in Managua, Nicaragua, Thursday, April 8, 2021. Nicaragua has started the second phase of its vaccination program with 60-year-old persons now being inoculated. (AP Photo/Gabriela Selser) 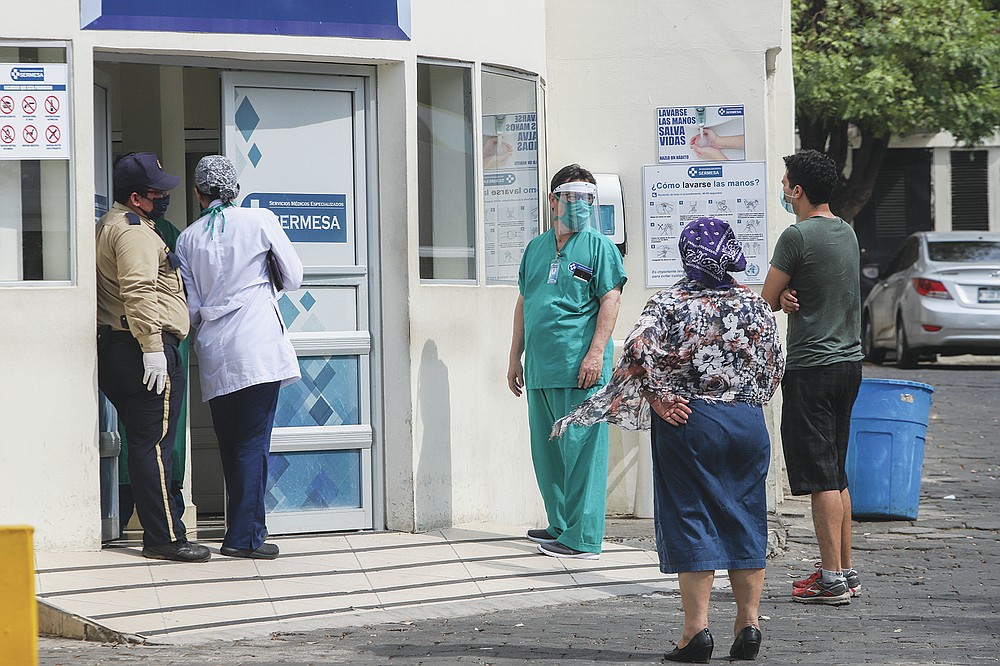 FILE - In this May 11, 2020 file photo, a medical worker wears a mask and face shield at the entrance of the SERMESA hospital in Managua, Nicaragua. While the Pan-American Health Organization urges Nicaragua to take more aggressive measures against the coronavirus pandemic and neighboring countries warily eye its outbreak, President Daniel Ortega&#x2019;s increasingly authoritarian government seems more focused on hiding the virus than treating it. (AP Photo/Alfredo Zuniga, File)