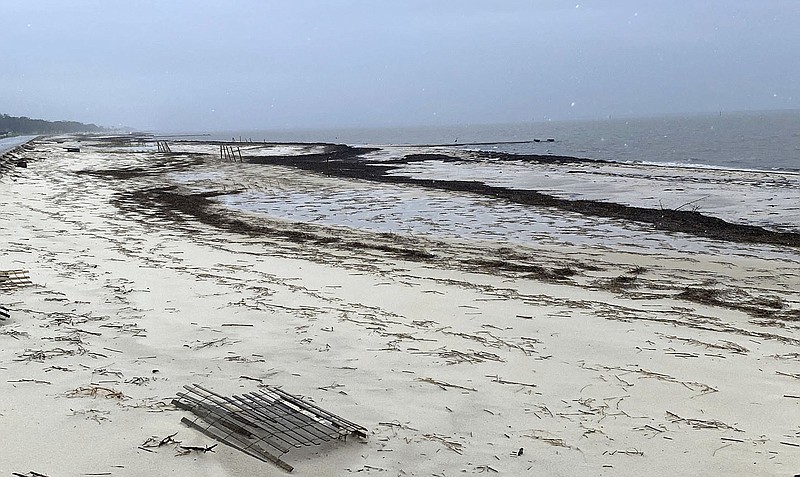 A flash-flood warning remained in effect Wednesday for beaches at Pass Christian in Harrison County, Miss., after debris from Hurricane Ida was pushed ashore by remnants of Nicholas. (AP/The Gazebo Gazette/Hunter Dawkins)

The National Weather Service said dangerous flash floods were possible from southeast Louisiana into the Florida panhandle. In Louisiana, the rainfall complicated an already-difficult recovery at homes ripped open by Ida on Aug. 29. Thousands remain without power in Texas and Louisiana.

"I'm not sure at this point what it looks like," said Edith Anthony, whose home in LaPlace, a New Orleans suburb between Lake Pontchartrain and the Mississippi River, lost part of its roof as floodwaters rose 2 to 3 feet two weeks ago.

They still don't have electricity, and couldn't arrange for a tarp to cover the roof before Nicholas blew in. Now she and her husband are staying in a Mobile, Ala., hotel, preparing to return this weekend to what's left of their home.

The storm was forecast to dump as much as 6 inches of rain from southeast Louisiana into the Florida panhandle through Friday, with 10 inches possible in isolated areas.

[Video not showing up above? Click here to watch » https://www.youtube.com/watch?v=7jDUHu--2lo]

The Pensacola News Journal reported that as much as 5 inches had fallen in parts of Escambia and Baldwin counties in Florida as of Wednesday afternoon.

Nicholas dumped as much as 10 inches of rain on parts of Texas -- and the weather service was checking reports of nearly 14 inches of rain in Galveston -- after making landfall as a Category 1 hurricane, the 14th named storm of the 2021 Atlantic hurricane season.

Houston reported more than 6 inches, and parts of Louisiana received more than 10 inches of rain from the storm.

In Louisiana, the flash-flood danger was expected to end today, but the rain is forecast to linger for days.

"We're going to be in a wet weather pattern well into next week," said meteorologist Christopher Brannan at the National Weather Service. He said Nicholas, now a tropical depression, would likely stall over southwest Louisiana while it dissipates.

In Louisiana on Wednesday, 72,000 were still without power more than two weeks after Ida.

Jerry Nappi, a spokesperson for Entergy Louisiana, said the utility company, which serves much of the state, did not expect Nicholas to lengthen restoration times.

Joe Ticheli, manager and CEO of South Louisiana Electric Cooperative Association, said the rain from Nicholas hadn't affected the utility's operations. The cooperative serves about 21,000 customers across five parishes including parts of the hard-hit Terrebonne and Lafourche parishes.

As of late Tuesday, he said power has been restored to about 80% of its customers, with the remaining 20% mostly in the hardest-hit parts of southern Terrebonne parish. However, he noted, that the destruction in those areas is so "catastrophic" that even when power is restored houses and businesses won't be able to receive it.

Information for this article was contributed by Jay Reeves and Juan A. Lozano of The Associated Press.