No hint given as FDA nears 3rd-shot call 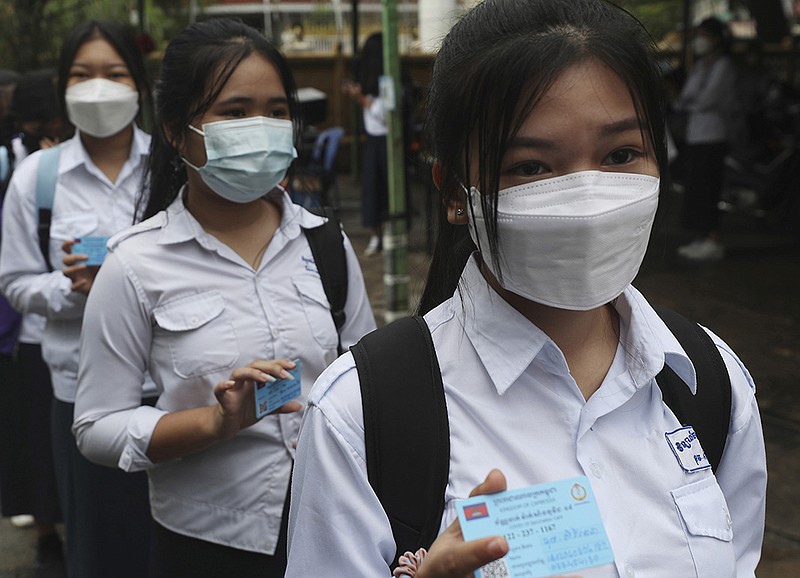 Students display their covid-19 vaccination cards before morning classes Wednesday at the Preah Sisowath high school in Phnom Penh, Cambodia, after Prime Minister Hun Sen announced that students can return to school because of high vaccination rates. He also said a campaign will begin Friday to vaccinate children ages 6 to 11, and said he is considering extending the program to ages 3 to 5. (AP/Heng Sinith)

A highly anticipated Food and Drug Administration review of evidence on whether a booster shot of the Pfizer-BioNTech coronavirus vaccine is widely necessary struck a noncommittal tone Wednesday, setting the stage for a potentially fractious debate among expert advisers to the agency this week.

Pfizer and government officials have relied heavily on data from Israel in making the case to the public that boosters are necessary six months after full vaccination. One of the studies from Israel, published Wednesday in the New England Journal of Medicine, showed that people 60 and older who were given a booster shot had an 11-fold lower risk of contracting an infection than people who did not receive the additional shot.

But FDA reviewers cautioned that a raft of studies with clear limitations have emerged in the past few months, pointing out that "biases can affect their reliability." The reviewers stated that "US-based studies ... may most accurately represent vaccine effectiveness."

Some studies have suggested the efficacy of the vaccines declines against symptomatic infections, but some have not, agency reviewers wrote.

[Video not showing up above? Click here to watch » https://www.youtube.com/watch?v=FG2xQjnj5Bo]

"Overall, data indicate that currently US-licensed or authorized COVID-19 vaccines still afford protection against severe COVID-19 disease and death in the United States," they wrote. "There are many potentially relevant studies, but FDA has not independently reviewed or verified the underlying data or their conclusions."

The documents were released in advance of the FDA's full-day meeting with its vaccine-advisory committee Friday. The outside experts will weigh whether the agency should approve a booster for the Pfizer-BioNTech shot. Pfizer was the first vaccine maker to file its application and data with the agency.

According to a meeting agenda the FDA posted on its website, the Friday panel meeting will include presentations from the Centers for Disease Control and Prevention, FDA staff, researchers from Israel and the U.K., along with Pfizer.

Marion Gruber, one of two top vaccine officials who the FDA recently said will step down later this year, also is scheduled to speak. Gruber was co-author of an article in The Lancet earlier this week arguing that booster shots weren't yet necessary for most people. The departure of the two longtime agency staff members is a potential sign of friction over President Joe Biden's booster plan.

Officials from Israel will present data from that country on booster protection against infections and severe disease, according to the agenda, and a professor of medical statistics from the University of Bristol will present data on real-world vaccine effectiveness.

The experts will vote on whether a booster should be approved by FDA, but their recommendation is not binding. The agency typically follows the recommendations of its advisers.

Infectious-disease experts are united in regarding vaccination as the critical weapon for fighting the pandemic, but the booster issue has opened fissures within the scientific and medical communities. The debates are numerous, and go beyond who should get a booster and when.

While there is widespread agreement that certain populations, such as people with compromised immune systems or older people in nursing homes, will probably need boosters, some medical experts feel it is unclear whether third shots should be recommended for all healthy younger adults at this juncture.

Pfizer is seeking approval of a booster for people 16 years and older six months after completing the two-shot regimen.

Boosters have become embroiled in controversy and mired in public confusion. In mid-August, senior Biden administration officials, worried about data showing waning vaccine efficacy, announced boosters would be available beginning the week of Sept. 20, pending sign-offs from the FDA and the CDC.

Health officials later warned the White House that only the Pfizer-BioNTech product had a chance of being approved by then. Reviews of two other authorized vaccines, from Moderna and Johnson & Johnson, are further behind.

Experts also say they know people are taking matters into their own hands, without waiting for regulatory approvals.

"There are already doctors recommending booster doses, and there are patients who have gone out there, through hook or crook, and have received boosters already," said William Schaffner, an infectious-diseases professor at Vanderbilt University School of Medicine. "The average patient and the average doctor think a recommendation with a capital R has already been made. Washington got out ahead of its skis a little bit."

Pfizer officials have repeatedly made the case that a booster will be needed six to 12 months after full vaccination, detailing the data in a presentation it will deliver at the FDA adviser meeting Friday.

"Real-world data from Israel and the United States suggest that rates of breakthrough infections are rising faster in individuals who were vaccinated earlier," Pfizer said in its presentation, which was posted on the FDA website.

The decrease in effectiveness is "primarily due to waning of vaccine immune responses over time," rather than the delta variant, Pfizer researchers said in the presentation.

Pfizer has presented data to the FDA showing that virus-blocking antibodies increased more than fivefold after a third dose of its original vaccine.

Those antibodies neutralized known variants of the coronavirus, including the highly transmissible delta. Pfizer has been developing a delta-specific booster, but because known variants remain susceptible to a third shot of the original formulation, it may simply be a trial run. The company's goal is to be able to switch strains within 100 days, in the event variants capable of eluding existing vaccines emerge.

Pfizer's call for boosters relies in part on the company's follow-up of its 44,000-person clinical trial, which showed the vaccine's ability to prevent any symptomatic infection declined gradually during six months. Initial protection was 96% in the first two months after vaccination, which fell to 90% during the next two months, and then to about 84%.

The vaccine's protective effects against any symptomatic infection appeared to fall about 6 percentage points every two months, according to the company's analysis, but protection against serious cases of disease remained robust at 97%. Even as protection against infections eroded, the vaccine remained highly effective. The FDA initially set the bar for a successful vaccine at a minimum of 50% efficacy.

Anthony Fauci, director of the National Institute of Allergy and Infectious Diseases, said last week in a lecture at the London School of Hygiene and Tropical Medicine that personal communications with Israeli health officials revealed a "significant diminution" in the Pfizer-BioNTech vaccine's protection against hospitalization. He acknowledged that American data so far showed only an "early inkling" of such a drop.

But he showed a slide showing an uptick in severe cases in vaccinated people in Israel starting in July and August, and called it a "profound change."

Fauci said his interpretation of the data is that a third dose is not a booster, but could be thought of as a key part of the original vaccination regimen, akin to other regimens requiring three shots -- hepatitis B, for example.

Research on the durability of immunity provides a bewildering array of evidence that could be used for or against boosters.

Laboratory research published Tuesday in the journal Science showed that even a low dose of the Moderna vaccine -- just 25 micrograms, a quarter of the typical dose -- provides long-lasting immunity. The data showed that antibodies waned seven- to tenfold during seven months, but there was a much less significant waning of other critical elements of the immune system that can keep an infection in the nose and mouth from spreading to the lungs and triggering a potentially severe or fatal illness.

Biden met Wednesday with the CEOs of Walt Disney and Columbia Sportswear, and other business executives and leaders, to discuss his recently announced vaccination requirement for companies that employ at least 100 people.

Some 80 million workers would be subject to the requirement, Biden said. The Labor Department's Occupational Safety and Health Administration is working to issue an emergency rule to implement the requirement in the coming weeks.

Biden said it would "take a little while" for the agency to put the new requirement "on the wall" alongside other health and safety policies, but noted that employer moves toward mandates are already starting to improve the nation's laggard vaccination rate.

Some business groups, including the Business Roundtable, welcomed the president's announcement, while some Republicans accused Biden of overstepping his authority and have threatened to sue the administration over the vaccine mandate.

Biden noted that Fox News, many of whose hosts have sharply criticized his policy, has required its employees to report their vaccination status and is moving to require testing for its unvaccinated workers.

Business groups warned a panel of House legislators that Biden's plan would be catastrophic to small companies as protesters held handmade signs and rallied in the Capitol rotunda in Jefferson City.

House GOP leaders on Tuesday sent a letter to Biden calling the plan "blatantly unconstitutional" and calling on him to provide a legal justification for it.

"What we have seen this week from the Biden administration is anti-liberty, anti-American and, in my belief, unconstitutional," Republican Rep. Nick Schroer said during the committee hearing.

Missouri Assisted Living Association lobbyist Jorgen Schlemeier said Biden's plan likely won't mean many more people get vaccinated in Missouri. He said some workers would rather quit and find another job than be vaccinated or face weekly testing.

"This is our state," Republican Sen. Bill Eigel told a cheering crowd in the rotunda, "And we don't have to do what Biden tells us to do."

Beginning Oct. 1, new immigrants to the U.S. must be fully vaccinated against covid-19, the U.S. Citizenship and Immigration Services said in a news release Tuesday.

People seeking to become "lawful permanent residents" -- or green card holders -- have permission to live in the U.S. and eventually seek citizenship. Applicants for permanent residency must undergo a medical examination.

The covid-19 vaccine joins a list of others that applicants must have, including inoculations against measles, mumps, rubella, polio and hepatitis A and B, according to the CDC. Some people may be exempt from the new rules, including those who are too young to be vaccinated and those who have medical conditions that make the shots dangerous for them.

The new initiative in the nation's most populous county begins Oct. 7, with proof of at least one vaccine dose required. By Nov. 4, proof of full vaccination will be mandatory, according to the county's Department of Public Health. Health officials strongly recommend the same precautions for indoor restaurants but have not chosen to mandate proof of vaccination for them.

The new restrictions were made ahead of the holiday season, which led to a huge surge to Los Angeles last year. More than 25,000 people have died of the virus countywide and the toll continues to climb because of the more-contagious delta variant.

The health department plans to issue "tool kits" to businesses so they can confirm vaccination status.

Information for this article was contributed by Carolyn Y. Johnson, Joel Achenbach and Laurie McGinley of The Washington Post; by Robert Langreth of Bloomberg News (WPNS); by Darlene Superville, Zeke Miller, Summer Ballentine, Stafanie Dazio and Adam Beam of The Associated Press and by Kaly Soto of The New York Times. 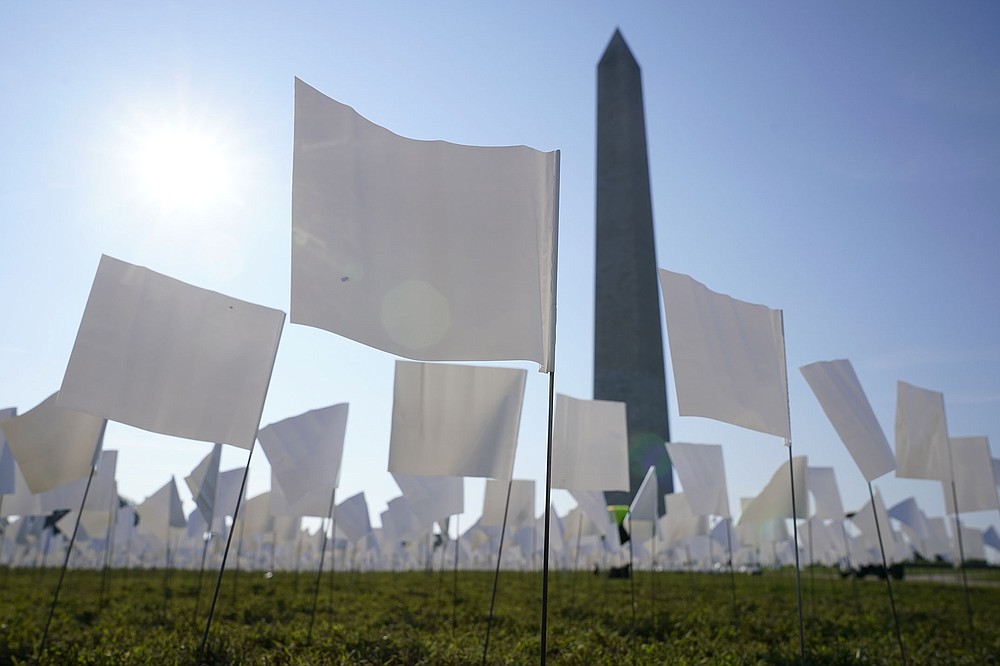 Flags representing Americans whose lives have been lost to covid-19 are placed on the National Mall near the Washington Monument on Wednesday. The flags, which will number more than 630,000 when all are placed, are part of artist Suzanne Brennan Firstenberg’s temporary art installation, “In America: Remember.” (AP/Patrick Semansky)

Print Headline: No hint given as FDA nears 3rd-shot call