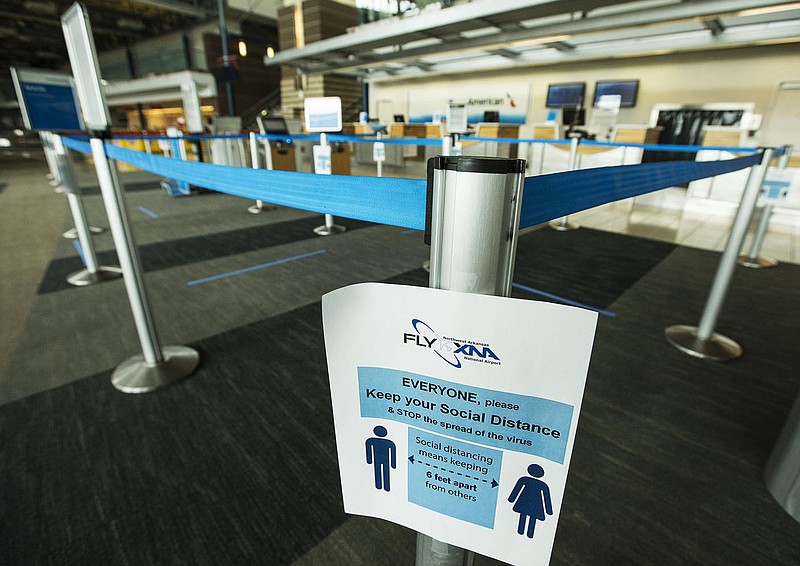 A sign asks passengers to maintain social distancing in the check-in area at Northwest Arkansas National Airport in Highfill in this Wednesday, May 13, 2020, file photo. Go to nwaonline.com/200517Daily/ to see more photos. (NWA Democrat-Gazette/Ben Goff)

The subject was broached during talks about buying land, including a piece needed for a future second runway, and land-use planning on and around the airport.

"There is activity all around us and the time is kind of getting limited," said Aaron Burkes, CEO at Northwest National. "It's something we won't need for probably 20 years, maybe 25, but it's the kind of thing, even if we don't need it until then, if we don't act now or in the very near future, we won't have the option of doing a second runway."

Eight properties within about a mile of the airport have sold in the past year and several are going through the rezoning and residential development process, Burkes said.

"It's absolutely going to be surrounding us," Burkes said. "In a matter of three to five years, there probably will not be a lot of pastures left out here."

Others properties are being sold or rezoned, all at development prices for single or multifamily housing, Burkes said. Most are north of the airport in either Highfill or Centerton but development in Bentonville also is creeping closer.

One development was recently approved that would put 126 duplexes not far off the end of the runway, where planes will be passing a couple hundred feet above them, Burkes said.

"I guess I don't understand to what extent we're supposed to protect idiots from buying land right at the end of a runway and complaining about noise," said Tom Lundstrum, a board member representing Washington County.

By contrast, in Little Rock the state's largest airport has generally done the encroaching in recent years, spending millions of dollars on property acquisition to abate aircraft noise concerns in the surrounding neighborhoods as well as to expand the airport's footprint for economic development.

Bill and Hillary Clinton National Airport/Adams Field in Little Rock bought out property to accommodate extending the airport's general aviation runway. It later bought out a neighborhood of about 80 homes as part of an effort to acquire land to allow Dassault Falcon Jet to expand its aircraft completion facility. The neighborhood, which sat on the airport's north side, had been increasingly isolated by piecemeal property purchases by the airport over the years.

Burkes said his Northwest Arkansas National staff members are spending a lot of time attending planning commission and city council meetings to oppose rezonings in an effort to assure there's compatible development and land uses near the airport. They're also working with cities on their land-use plans.

The airport is required to do those things in order to continue getting Federal Aviation Administration grants, Burkes said. But, the other side of the coin is landowners don't like having their land uses restricted and, typically, planning commissions and city councils are going along with them, approving the rezonings from agricultural or industrial uses to residential.

"Again, we hate to see that because we know it's going to lead to problems for us down the road with complaints and lawsuits," Burkes said. "There's going to be a substantial amount of noise associated with airplanes flying over these properties."

Kelly Johnson said the airport had one lawsuit a few years ago, over noise disturbing a laying hen operation about 3 miles from the airport. That case took two years and $347,000 to defend.

Directors urged Burkes and his staff to look at every option available to get the message out about compatibility and to look at zoning or "avigation" easements for property around the airport.

"I think we need to be dealing with Centerton, Bentonville, Highfill, Regional Planning and trying to get zoning," said Mike Johnson, who represents Fayetteville on the board. "First and foremost, it's height so you don't build a multistory building in those runway approaches."

Mike Johnson said commercial uses such gas stations, grocery stores, even strip malls, would be compatible with the airport, as opposed to residential.

An avigation easement follows the property and provides insurance against someone buying it in the future and then turning around and suing the airport for noise issues, Burkes said.

Jonathan Barnett, who represents Benton County on the board, said staff members should take every opportunity to describe the airport authority's concerns to anybody who will listen.

"As long as we're out there telling everybody ... I would think that would limit some of our exposure in the future," Barnett said.

Meade & Hunt, airport consultants, will be looking at off-airport land uses and making recommendations in the future for both the airport and the surrounding cities.

Ryk Dunkelberg, with Meade & Hunt, said it's a complicated issue but the general legal premise is airports are liable for the noise they make even if the landowner should have known. But, Dunkelberg said putting cities on notice and being on record as opposing incompatible land uses could be helpful in any potential legal defense.

Johnson urged forming a group with Regional Planning, Benton County government and the surrounding cities to talk about what's going on with the airport and air concerns on a regular basis, rather than meeting with each entity separately.

Information for this report was contributed by Noel Oman of the Arkansas Democrat-Gazette.