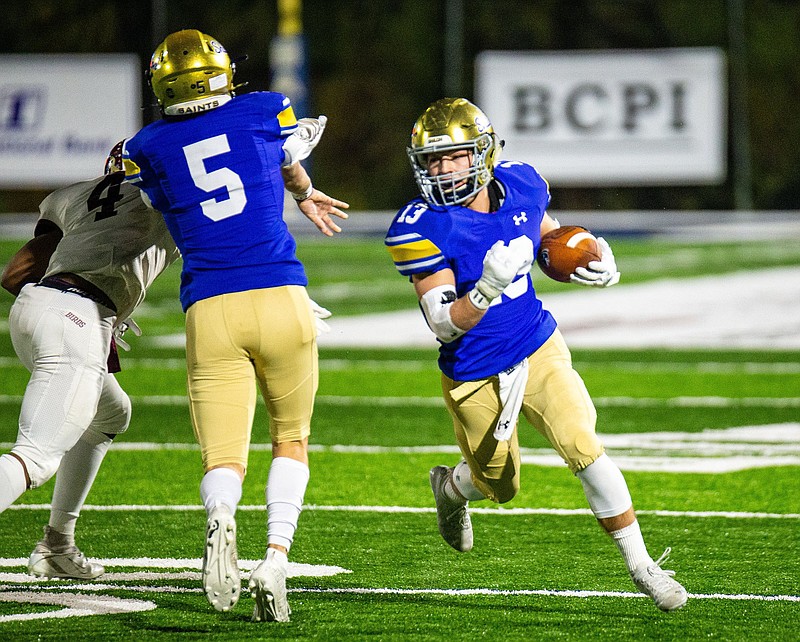 Ben Baker (13) and the Shiloh Christian Saints get a chance Friday to avenge its only loss last season to Sand Springs (Okla.) Page. (Special to the NWA Democrat-Gazette/David Beach)

Shiloh Christian went 14-1 and won the Class 4A state championship last season with a 27-26 loss to Sand Springs Page standing as its only blemish on a fantastic season. The Saints get a second chance at Page on Friday at Champions Stadium in Springdale.

"It was a one-point loss and we turned the football over so many times that really hurt us," Shiloh Christian coach Jeff Conaway said. "So, we're excited about having another opportunity against them."

Sand Springs Page is 2-0 on the season after a 53-26 win over Sapulpa, Okla., and a 34-13 win over Tulsa Bishop Kelley. The Sandites are led by junior running back Blake Jones and senior quarterback Ty Pennington, who threw for 246 yards and three touchdowns last season against the Saints. Jones carried 20 times for 224 yards and three touchdowns against Bishop Kelley.

Shiloh Christian followed a season-opening win over Pea Ridge with a 27-21 victory at Poteau, Okla.

"They're always a physical football team," Conaway said. "I was proud of our guys and how they handled that, especially on the offensive and defensive lines. I liked that toughness."

Ben Baker continued to display his versatility when he ran for 85 yards and two touchdowns and caught a touchdown pass in the game. Baker also made 12 tackles, including one stop for minus yardage, against Poteau.

"Ben is very explosive," Conaway said. "Wherever you put him, he's going to make plays."

Tell us who you think will win this week's high school football matchups in Northwest Arkansas in our Prep Rally Pick 'Em Contest: nwaonline.com/916pickem/

Siloam Springs coach Brandon Craig is pleased to get a chance to play Pea Ridge on Friday after the game was postponed two weeks ago because the Blackhawks had covid-19 issues.

But he's not thrilled with the timing.

"It's kind of a catch-22 because we really like having that bye week going into conference play," Craig said. "But we don't want to lose a game because we need that experience. We have some young kids playing for us.

"You hope in my case, you don't have a bunch of quarantines and we all stay healthy and ready to go for Van Buren in that first conference game."

Both of those things have been issues for Siloam Springs (0-2) this season.

The Panthers lost senior linebacker Caden McHaney to a knee injury in the season opener against Rogers. They found out a starting defensive lineman was out because of covid quarantine along with two more special teams players when they were getting set to leave for Harrison last week.

But they had their chances in a 35-31 road loss to the Goblins, Craig acknowledged.

"We feel good. We had tremendous opportunities to win the game and just didn't close the deal," Craig said. "It's one of those things, we're going the right direction. We've just gotta make a few stops defensively."

Quarterback Hunter Talley has been a bright spot for sure. He completed 25 of 40 passes for 335 yards and two touchdowns and also rushed for 104 and three scores against Harrison.

Craig said his team did a better job against the run last week, after being gashed by Rogers when McHaney was injured. But Harrison struck for two second-half touchdowns last week through the air.

"We're thin at linebacker and it just changed our whole team when that happened," Craig said. "The next week, we went to Harrison and they had 32 carries for 84 yards I believe. So we got that fixed, but we gotta turn around and get our secondary squared away."

Springdale Har-Ber gets to play at home for the first time this season on Friday against Fort Smith Northside.

The bad news is the quality of the opponent, a Northside team that is 2-0 after beating defending Class 6A champion Greenwood 29-20. The Grizzlies jumped to No. 7 the Overall poll after wins over Greenwood and rival Fort Smith Southside (31-16) to begin the season.

Springdale Har-Ber welcomes the challenge of facing the Grizzlies, especially at home. But Har-Ber knows it must greatly reduce the turnovers that hurt the Wildcats in consecutive losses to Mansfield, Texas, and North Little Rock.

"We've got to quit turning the ball over," Har-Ber coach Chris Wood said. "We had four turnovers in each of those games. We're playing hard but we can't be sloppy."

Har-Ber's other concern is in trying to stop a strong Northside running game that features Ty Massey and Sundquist Church, who combined to rush for 295 yards and 42 carries. Massey led the way with 22 carries for 155 yards and two touchdowns.

The Grizzlies are guided by senior Walker Catsavis, a former receiver who took over at quarterback late last season.

"Northside comes off the (offensive) line really well and they've got two running backs who are really good," Wood said. "Their quarterback is a fantastic athlete who throws a good ball. They cause a lot of problems with their physicality."

Prairie Grove has added another playmaker to a traditionally strong running game at Prairie Grove.

He is Ethan Miller, a junior who rushed for 96 yards and two touchdowns in a 41-28 win over Pea Ridge. He also caught four passes for 99 yards and a score.

"Ethan is extremely elusive," Prairie Grove coach Danny Abshier said. "He had a good night and that gives us three backs right there that other teams have to guard against."

Miller's greatly contributed to a Prairie Grove team that piled up over 400 yards in total offense against the Blackhawks. Conner Whetsell added 81 yards rushing on 14 carries and Colin Faulk contributed 60 yards rushing on eight attempts. Faulk also had an interception.

The win followed a 56-27 defeat at Farmington in the season-opener for both teams.

"Our preparedness was much better against Pea Ridge," Abshier said. "We were more ready to play. We kicked the ball around too much against Farmington."

Prairie Grove will try improve to 2-1 in its home opener against Stilwell, Okla., on Friday at Tigers Stadium. Stilwell is led by Don Harrison, a former coach at Lincoln and Newport.

The Indians lost 42-7 at Gentry last week after having their season-opener against Rogers cancelled because of Covid-19 issues. Prairie Grove won 48-13 last year at Stilwell.

Print Headline: Saints get a shot at redemption