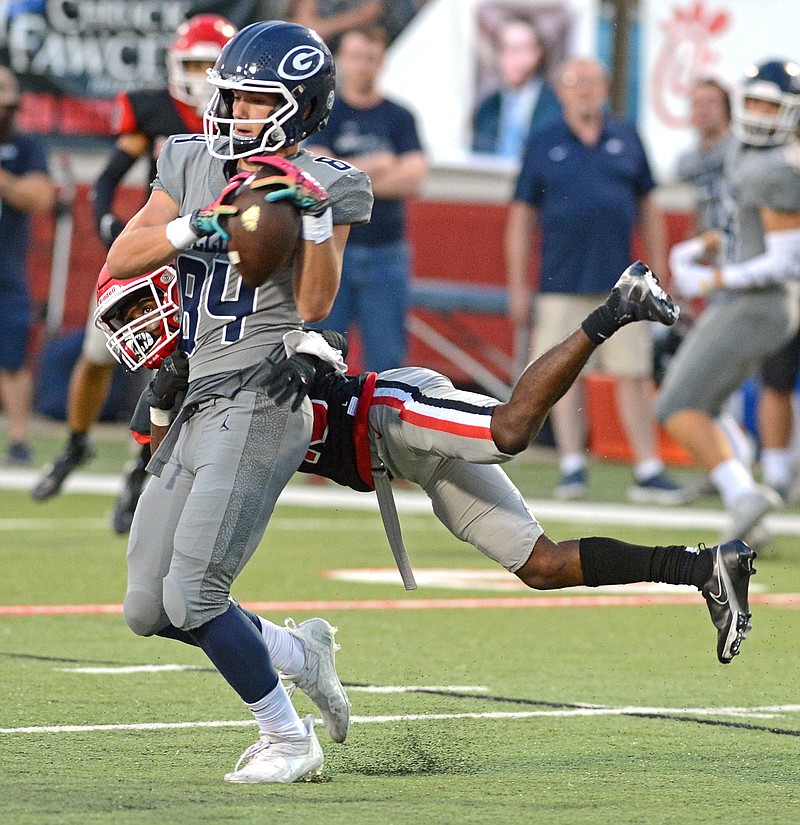 It all started up front where the Grizzlies had to replace all three starters from a year ago.

Senior defensive end Aaron Carter had two of the biggest plays of the night for the Grizzlies. Carter had the first of three interceptions by Northside's defense and knocked down a third-down pass in the fourth quarter that forced a Greenwood punt. He also had a sack.

"We knew they were a fast-paced team," Carter said. "We had to condition a lot. We know they love the screens. They love to run trips."

The big play, though, was a fierce pass rush by senior linebackers Seth Fields and Kendre Esaw that forced an errant pass that cornerback Jack Green intercepted and returned 64 yards for a touchdown with 37 seconds left that clinched Northside's win.

Tell us who you think will win this week's high school football matchups in Northwest Arkansas in our Prep Rally Pick 'Em Contest: nwaonline.com/916pickem/

It marks the first time the Grizzlies have had two 100-yard running backs and a quarterback throw for at least 100 yards together in a game in 31 years.

In a 50-20 win over Rogers in the next-to-last week of the regular season in 1990, Chad Frazier completed 5-of-7 passes for 139 yards and two scores, and tailback Anthony Gardner ran for 196 yards and three scores and fullback Jason Pyles added 120 yards and a touchdown.

"It was right out here," said Frazier, who's currently an assistant for the Grizzlies. "We put it on them pretty good. I remember a couple of long bombs to Jesse Core. Jason and Anthony, those two guys back there were dudes. Jason was a 215-pound fullback, and Anthony was a 4.4 190-pound tailback. That was a big night. We got after them. It was a lot of fun."

The Grizzlies knew they would also have to pass the ball some in addition to running effectively against Greenwood.

Catsavis completed 12-of-21 passes for 107 yards and a 3-yard touchdown toss to Julian Martinez for the go-ahead score on the Grizzlies' first possession of the second half.

Catsavis guided Northside 71 yards on 13 plays before rolling to his right and tossing the touchdown pass to Martinez all alone in the back of the end zone.

"We've been working on that since the summer," Martinez said. "We've been saving that play exactly for Greenwood. It panned out just the way it was supposed to."

Northside had to overcome a first-and-25 on the drive. Sundquist Church picked up 11 and 5 yards to start the drive, Catsavis threw to Morris for a gain of 6 before Church gained three yards that was just enough after a measurement at Greenwood's 20.

Northside pounded out 279 yards on the ground behind Church and Massey.

"I'm not going to say we've got the best two running backs in the state, but they've got to be right there at it," Northside coach Mike Falleur said. "They're so unselfish. They support each other."

The offensive line of tackles James Collie and Erik Barrientos, guards Brandon Bailey and Mason Medlock, and center Adrian Falcon will receive a boost this week with the return of 356-pound junior Jamoni Benton, who's been out since July with an injury.

Northside travels to Springdale Har-Ber on Friday to close out nonconference play before hosting Bryant on Sept. 24 in the 7A-Central opener.

The Lavaca Golden Arrows was solid on both sides of the ball in Friday's 35-0 win over Mountainburg.

"I'm proud of the kids," Lavaca coach Mark Headley said. "Our staff has been working hard to get to a point where we're competitive and playing good football. We played pretty well on Friday night."

Lavaca sealed the win with 21 points in the fourth quarter after a 14-0 halftime cushion.

"We played great defense Friday night, and that got us going," Headley said. "Then our offense clicked pretty much all night."

The win evened Lavaca's record at 1-1 after opening with a 49-12 loss to Paris when the Golden Arrows had nine players, including seven key starters, out due to quarantine and dressed just 21 players for the game.

Lavaca now travels to Coal Hill to face Johnson County Westside in the final nonconference game before hosting Cedarville in the 3A-1 opener on Sept. 24.

"I told them I'm proud of the way they played Friday night, but it doesn't mean anything if we can't play that way every Friday night," Headley said. "We want to be consistent and work a little momentum as we go into conference play."

The Greenwood Bulldogs lost for the first time under Chris Young and had their 16-game winning streak snapped with the loss to Northside.

After committing zero turnovers in the first two games of the season, the Bulldogs had four on Friday with the clincher being an interception returned for a touchdown with 37 seconds left.

"We ran the wrong route, that wasn't on the quarterback," Young said. "We've got to call better plays in that situation. It's a good lesson for us. That's a good football team. They do a good job. Obviously, it's not the result we wanted, but it doesn't stop us from going where we want to go."

Greenwood's open date is this week before traveling to War Memorial Stadium on Thursday, Sept. 23, to open 6A-West play against Little Rock Parkview.

"We just can't turn the ball over," Young said. "We played two games and hadn't turned the ball over and then come out turn it over four times. We've got to coach that up better in practice and get better, and we will."

The Mansfield Tigers were forced to cancel nonconference games each of the last two weeks due to contact tracing and a very limited roster, including a home game two weeks ago against Waldron.

The Tigers have now picked up a nonconference game at home to help make up for the lost home date by hosting Cedarville, which is a fellow 3A-1 conference opponent. The two won't play their scheduled conference game until Oct. 29.

"I know they're conference and we're going to be playing them twice, but I don't care," Mansfield coach Tim Cothran said. "We're just glad to have a game."

Mansfield opened the season with a 41-7 win over Magazine. In that win, junior Fisher Willsy had five carries for 75 yards and scored four touchdowns on runs of 2, 14, 14, and 11 yards.

He also had six tackles and recovered a fumble.

Willsy normally plays receiver but also lines up at quarterback.

"We have some packages for him," Cothran said. "He can either run it or read it. We have other plays for him."

Returning quarterback Zane Dugan threw for 148 yards and also had a 45-yard punt.