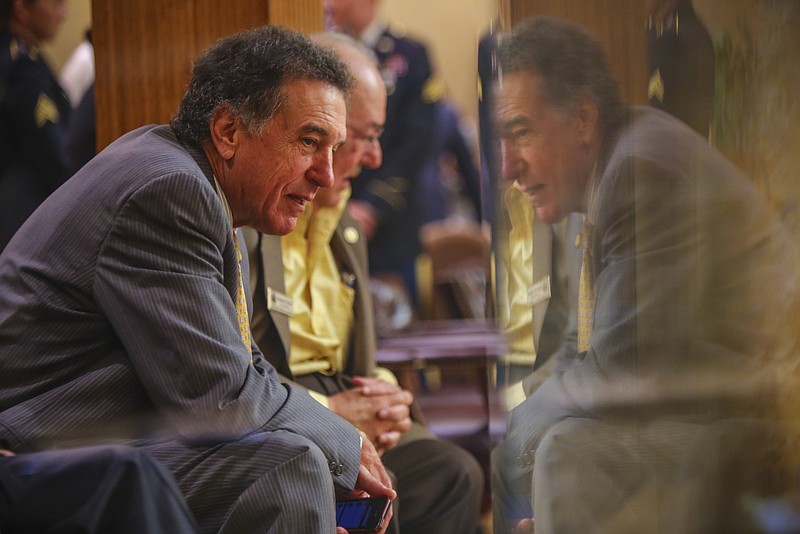 Robert Moore watches from an upper gallery as Gov. Asa Hutchinson enters the House chamber to address a joint session of the Legislature as the 90th General Assembly convenes for the first day of its third special session at the state Capitol in Little Rock in this May 19, 2016, file photo. Moore is a former state House speaker and a member of the Arkansas Highway Commission who became its chairman.

Moore of Arkansas City received the award during a luncheon Aug. 31 at the Arkadelphia school, according to a news release.

Moore graduated from OBU in 1966, was commissioned as a second lieutenant in the United States Army and served as a pilot in Vietnam. He is a former director of the Arkansas Alcoholic Beverage Control and former Arkansas Speaker of the House.

"Chairman Moore is a visionary," Department of Transportation Director Lorie Tudor said. "He was speaker of the house in 2012 when voters approved the temporary half-cent sales tax for the Connecting Arkansas Program, and last year, he was chairman of the highway commission when voters removed the word 'temporary' and made this source of revenue permanent for state highways, county roads and city streets."

Moore has worked under six governors, according to the release.

"I look at moving forward," Moore said, "and continuing to work on tourism in the Delta, improving the infrastructure for the great people of the state of Arkansas, and bringing opportunities to the people that we love and live with in this state. I want to be a better husband, a better friend, and I want to work harder in the fight against social injustice."