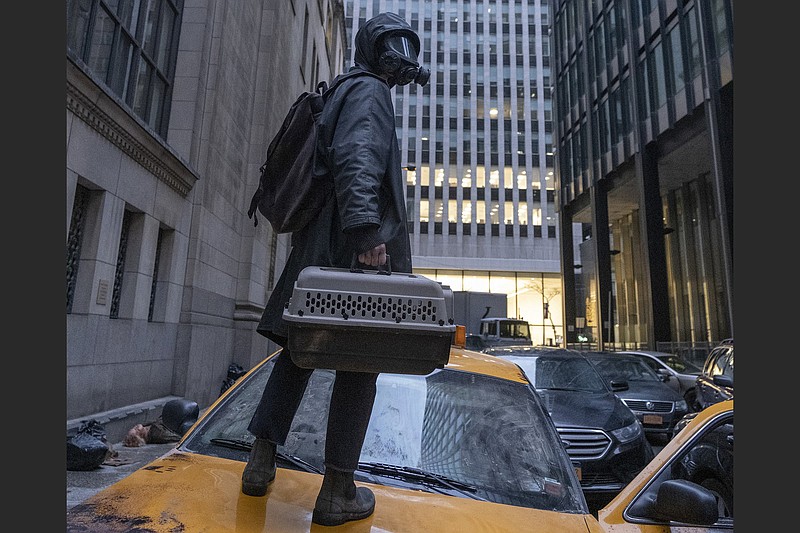 A thousand different varietals could bloom from the seed of the sci-fi series "Y: The Last Man."

A mysterious plague kills all people with Y chromosomes, except for one man: in an instant, boys and men are gone, and so are trans women. The disease, or whatever it is, doesn't spare any other mammalian species — half the world's dogs, cats, rats and whatever else die off, too. Extinction looms, but the premise itself is hyper-fertile. What values does a world run by women assign the only man left alive? And how does a society in which half the population abruptly flatlines remake itself?

The series, now streaming on FX on Hulu, isn't a particularly faithful adaptation of Brian K. Vaughan and Pia Guerra's Eisner Award-winning comic-book series, but there remains a perhaps immovable comic-book quality to the show. Only in a medium so proud to embrace the fantastical would "the last man" (Ben Schnetzer) happen to be the son of the new president (Diane Lane), who surely raised a few private-school eyebrows by naming her daughter Hero (Olivia Thirlby), and who suddenly finds herself protected by a secret agent (Ashley Romans) who goes by "355." And while the apocalypse is nigh, Schnetzer's Yorick — the potential key to explaining the "Event" and thwarting the end of humanity — gives little thought to anything else but finding his girlfriend Beth (Juliana Canfield) and taking care of his pet capuchin monkey named Ampersand, a male that also somehow survived extinction.

"Y: The Last Man" debuts after multiple attempts to bring the story to large and small screens. One of the biggest draws of the original comic-book series was the way it reached toward realism amid an unthinkable cataclysm. But that melding of opposites feels greatly unsatisfying in this somber and occasionally grisly TV adaptation, which ends up emphasizing plotting and world-building in lieu of characterization. Yet the former aren't especially notable either, despite executive producer Eliza Clark's emphasis in interviews on exploring the infrastructural failures of this bare new world.

Yorick is so thinly and unconvincingly written that I would have happily watched a version of the series that centered on the D.C. drama that follows after the president, the VP, and much of the political elite perish in one fell swoop, leaving the opposition party in charge. Almost immediately, the conservative first daughter, Kimberly (a blond Amber Tamblyn, who studied Ivanka Trump to prepare for the role, but more recalls Meghan McCain), begins building momentum against Lane's Democratic senator-turned-POTUS Jennifer Brown — already the target of violent conspiracy theorists who believe she unleashed a biological weapon to take over the White House. There aren't enough specifics to support one Republican's accusation that the Brown administration is a "Rachel Maddow fever dream." (It's not at all clear what that would even mean in this universe, or how much authority the federal government has anymore.) But Tamblyn is terrific as a widow and mother grieving the loss of three young sons, torn between her partisan-hack habits and her rediscovery of the more empathetic parts of herself she'd repressed to become a public ideologue.

Lane has far less to work with; Jennifer doesn't even search for her children, living in an evacuating Manhattan, until the plot forces her to do so. There's plenty of political turmoil happening around her; a rare bit of humor has the Russian government disseminating propaganda that the country's top brass were saved from the plague by their Slavic manliness. But Jennifer herself is mostly a void in blue fleece, and it's hard to square the blandly aspirational politician and patently caring mother with the story line of her estrangement from her daughter, a recently sober paramedic who's loath to let her sole surviving parent know whether she's dead or alive.

Hero and Yorick both end up on the road: she, to dawdle her way to D.C. with her trans friend Sam (Elliot Fletcher); he, dragged on a mission to Boston by 355, where they hope to find a Harvard scientist Allison Mann (Diana Bang) who can tell them why the president's loser magician son and his monkey aren't dead.

The six episodes made available to critics, at least, feel pointedly and thankfully unlike gender commentary, except when the show pauses to expound on how gender can take limitless permutations. The world isn't a better place because women are in charge, and groups — or are they gangs? — quickly form to hoard resources, exclude outsiders and punish transgressors. (Missi Pyle briefly electrifies as Roxanne, a leader of one such crew.) Markets where, despite widespread hunger, no one wants MREs sometimes require brutal enforcement to stay open and running. Plenty of women continue to sport high heels — a phenomenon that suggests two possibilities: women are too wiped by the sheer act of survival to create a new world in their own image, or it's simply a credulity-straining production decision that still has to take into consideration the male gaze.

In other words, there's just not enough here to distinguish it from any number of post-apocalyptic entertainments we've had in previous years, other than the gratingly single-minded protagonist. A world with almost no men has so much potential, but this one is squandered on its mostly lifeless characters.