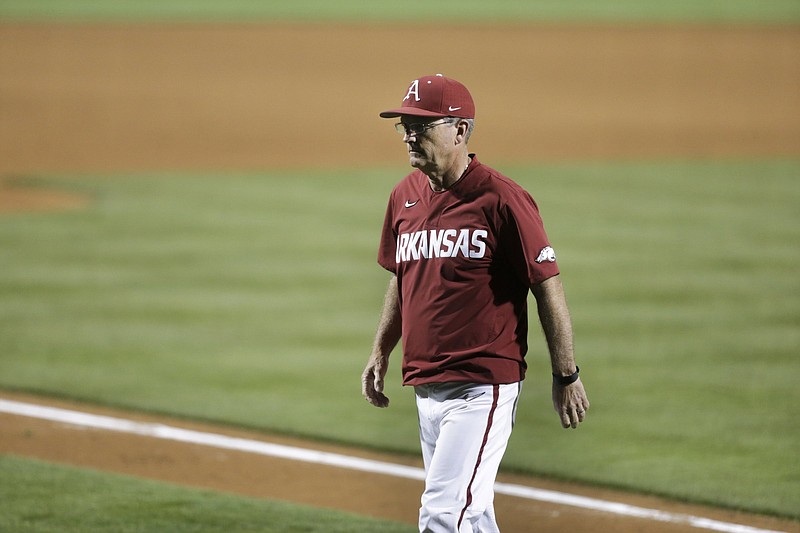 Coach Dave Van Horn will enter his 20th season with the Arkansas Razorbacks in 2022. The Razorbacks begin the 2022 season with a three-game series against Illinois State at Baum-Walker Stadium in Fayetteville. (NWA Democrat-Gazette/Charlie Kaijo)

FAYETTEVILLE — Arkansas’ 2022 baseball schedule is highlighted by weekend home series against the two teams that played for the national championship.

The Razorbacks released a 54-game schedule Wednesday. Two additional midweek games could be announced at a later date.

The Razorbacks are scheduled to open the season with a three-game home series against Illinois State beginning Feb. 18. It is the first of three weekend nonconference series in Fayetteville. Arkansas will also host Southeastern Louisiana for three games beginning March 4 and Illinois-Chicago for four games beginning March 10.

Arkansas is scheduled to play Indiana, Stanford and Louisiana-Lafayette once apiece at the Round Rock (Texas) Classic on Feb. 25-27.

The Razorbacks are scheduled to start SEC play with a home series against Kentucky on March 18-20. They will play their first SEC road series the following week at Missouri.

The North Little Rock game will be one of two games against the Bears, who will play in Fayetteville on April 5. The Razorbacks will also play two games apiece against Arkansas State, Arkansas-Little Rock and Arkansas-Pine Bluff.

Only dates are known for several of Arkansas’ games in 2022. Times and TV networks will be finalized closer to the start of the season, and some dates are subject to change.

May 6 at Auburn* TBA

May 7 at Auburn* TBA

May 8 at Auburn* TBA

+Round Rock Classic at Dell Diamond, Round Rock, Texas