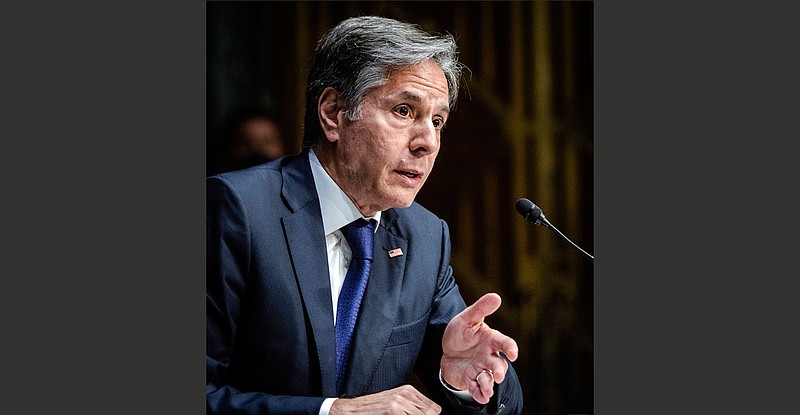 Testifying on Capitol Hill earlier this week, Secretary of State Antony Blinken defended the Afghan evacuation operation, calling it “one of the biggest airlifts in history.” (AP/Jabin Botsford)

WASHINGTON -- Weeks after their dramatic escape from Kabul, tens of thousands of Afghans hoping to be resettled in the United States remain on military bases across the country and overseas as medical and security screenings slow the process.

A small but worrisome measles outbreak has contributed to the delays, causing a halt in evacuation flights as federal officials scramble to contain cases and inoculate new arrivals against the disease and other illnesses, including the coronavirus.

As of Tuesday, about 64,000 evacuees from Afghanistan had arrived in the United States. The vast majority were at risk under Taliban rule after the U.S. withdrawal from the country last month. Nearly 49,000 are living on eight domestic military bases, waiting to be resettled in the United States, according to an internal federal document obtained by The New York Times. Roughly 18,000 are on bases overseas, largely in Germany. Some leave within weeks, but most stay longer.

The screenings, which involve an array of federal agencies, follow a condensed and harried evacuation effort last month shortly before the United States completed its withdrawal from Afghanistan. About 100 Americans who want to leave and an unknown number of vulnerable Afghans remain in the country.

Secretary of State Antony Blinken defended the Biden administration's evacuation operation during hours of congressional testimony this week, which included calls from Republican critics for his resignation and charges that the administration failed to adequately plan for the Afghan government's collapse to the Taliban.

Blinken said there was no deadline for getting people out of the country and that "in the end, we completed one of the biggest airlifts in history, with 124,000 people evacuated to safety."

While Afghan evacuees have escaped the Taliban, their lives remain in limbo, with restless children and little to do on the bases across the United States, including Fort McCoy in Wisconsin, where more than 12,700 people were being housed as of last week, and Fort Bliss in Texas, which has received more than 9,700.

"We will be here one month or more," said Milad Darwesh, who arrived Saturday at Joint Base McGuire-Dix-Lakehurst in New Jersey after traveling for days to reach the United States. There are nearly 8,000 evacuees at the base.

Darwesh said he and his family narrowly escaped Kabul in a harrowing journey with the Taliban on their heels to the gates of the airport there. They spent four days in Doha, Qatar, along with thousands of other evacuees, with little water for drinking or washing. He and his family were then transported to an airplane hangar at a base in Italy before finally making it to Fort Dix.

"It's nice here," said Darwesh, a former military translator who has been waiting for two years to have his visa processed. "We now have our own room."

Many evacuees have arrived at Dulles International Airport in Virginia, and hospitals in the state have complained to the federal government that they have been overwhelmed by Afghans in need of medical treatment. Health care providers have asked for financial assistance, and Virginia's senators, Mark Warner and Tim Kaine, both Democrats, sent a letter to Biden administration officials pushing for better coordination.

"Virginia ambulances and hospitals, already occupied with regular patient needs and dealing with the additional stress of covid-19, have done superb work to partner with federal agencies managing this processing effort and make sure that emergency health needs of our Afghan partners are met," said Katie Stuntz, a spokeswoman for Kaine. "The health providers deserve reimbursement for this work, and Sen. Kaine is working with all stakeholders to make sure that happens."

Refugee groups have scrambled for weeks to prepare for large numbers of Afghan refugees but so far have seen only a trickle of people ready to be resettled.

"In last few weeks, we served more than 100 people," said Krish O'Mara Vignarajah, CEO of Lutheran Immigration and Refugee Service, a resettlement agency that has affiliates in 22 states. "Some are coming with little more than a backpack. We know the importance of an orderly system that processes and prepares these new Afghan arrivals, helping them make informed decisions on where they ultimately want to resettle."

[RESETTLING EVACUEES: Map of the United States not appearing above? Click here » arkansasonline.com/coronavirus/916evacuees/]

Ned Price, a State Department spokesman, said Wednesday that the administration was trying to move the evacuees off military bases "as quickly and efficiently as we can."

The United States should not accept Afghan refugees, including translators and others who helped the American military during the 20-year war, Republican U.S. Senate candidate Jim Lamon said, staking out a hard-line stance against a group of immigrants that has had widespread support from both parties.

Rather than bringing them to the homeland, the United States should help Afghans who assisted in the war to flee the Taliban and resettle in the Middle East, Lamon told The Associated Press on Wednesday.

"They should go to countries that are friendly to them and us," Lamon said. "We cannot continue to be the world's refugee camp."

Lamon is running in a crowded Republican primary to take on Democratic Sen. Mark Kelly.

His stance on refugees comes as GOP candidates across the country wrestle with how to balance the base's skepticism of immigration with broad public support for providing refuge to Afghans who risked their lives assisting the United States.

While many Republicans have questioned whether refugees are sufficiently vetted or suggested the U.S. is accepting too many Afghans, few have said that even those who most closely assisted U.S. troops should be excluded.

His position puts him at odds with others in the GOP who say accepting refugees is consistent with Christian teachings.

"They helped our military members in their country, and now we stand ready to help them in ours," Ducey and Bowers said.

Lamon said the U.S. has spent billions of dollars in the Middle East, including Oman, the United Arab Emirates and Saudi Arabia, and those countries "need to have brought them in and helped us in that respect."

"What I would have proposed is that those who helped us, we help them move into neighboring countries," Lamon said.

Human-rights and refugee groups appealed Thursday to the European Union to step up its help for people trying to flee Afghanistan, accusing the bloc of failing to do enough to assist those living in fear of Taliban rule.

More than 100,000 people were airlifted out of Kabul in a chaotic exodus late last month after President Joe Biden announced that U.S. troops would withdraw, and the Taliban seized control of strife-torn Afghanistan in just a few weeks. Thousands more Afghans want to leave.

In new figures released Thursday, the EU's asylum agency said that asylum applications by Afghans numbered 7,300 in July -- before the government fell -- a 21% increase over June and the fifth-consecutive monthly rise. Almost 1,200 were unaccompanied minors, the European Asylum Support Office reported. More than half of asylum applications by Afghans in Europe are rejected.

"The EU should be sharing, rather than shirking, the responsibility to offer them protection," the 24 nongovernmental organizations, including Amnesty International, Caritas Europa, the International Rescue Committee, Oxfam and the Red Cross, said in a statement.

The groups warned that 18 million people are in urgent need of humanitarian assistance in Afghanistan, nearly half the population. More than 630,000 people have been forced from their homes so far this year due to violence and drought.

There was no immediate reaction from the European Union.

Meanwhile, the Dutch foreign minister, Sigrid Kaag, resigned Thursday after the lower house of parliament passed a motion of censure against the government over its handling of evacuations from Afghanistan amid the Taliban takeover.

In a parliamentary debate Wednesday night, Kaag acknowledged that the government's slow or muddled response to warnings about the situation in Afghanistan meant some local staff and people who had worked as translators for Dutch troops in the country had not been evacuated.

After the motion was passed Thursday, Kaag immediately announced she would tender her resignation, saying that parliament had decided "that the Cabinet has acted irresponsibly."

"I can only accept the consequences of this judgment as the minister with ultimate responsibility," she added.

Information for this article was contributed by Jennifer Steinhauer and Eileen Sullivan of The New York Times; and by Jonathan J. Cooper, Lorne Cook and Mike Corder of The Associated Press.