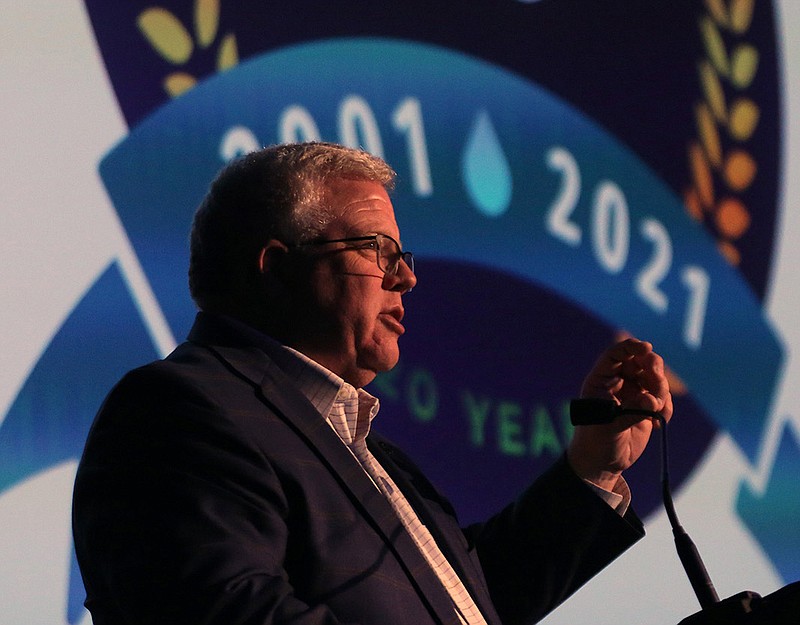 Officials at the regional water utility Central Arkansas Water are considering eliminating the option for customers to pay their bill at a drive-thru window at 221 E. Capitol Ave. or in the building's lobby.

Tad Bohannon, the utility's chief executive officer, told utility commissioners at a board meeting Thursday that the earliest the change might occur would be around Feb. 1.

Commissioners took no formal action Thursday regarding the possible closure.

Traffic was pushed from the lobby to the drive-thru during the covid-19 pandemic. Central Arkansas Water spokesman Douglas Shackelford in an email on Thursday said that only the drive-thru and drop box are open for payments.

"The lobby has not reopened since the start of the pandemic," he wrote.

Bohannon showed commissioners a chart that showed declining use of the drive-thru window between April and July of this year.

Bohannon said other utilities have made plans to close their lobby operations permanently.

He suggested that if the utility moves to close the drive-thru, officials would use direct mail to inform those customers who use that payment option, explore alternative payment locations, deploy signage at the drive-thru and walk people through how to sign up for a customer self-service portal.

Costs associated with employing cashiers and reception personnel, as well as lobby customer service representatives, total $714,000 annually, according to a slide shown to commissioners.

Asked by commissioner Jay Barth about the fee at the utility's network of stores where customers can make payments in person, Bohannon confirmed they are charged a flat fee of $2.95 regardless of the bill's amount.

When asked about the status of communication with employees about the potential changes, Bohannon said officials have started communicating with them and added that they would "give people the option to transfer to other jobs that are available."

He suggested employees would be retrained as necessary.

Barth, who works as the city of Little Rock's chief education officer, suggested that the parts of town where individuals may not have access to broadband because of affordability issues could bear the brunt of the closure.

"I would like us to think a little bit about that ... from an equity perspective," in order to not put an additional burden on lower-income residents, Barth said.

Bohannon said the utility could pursue the "real old-school option" of the drop box.

He added that kiosks are under discussion, but noted that either the utility or the individuals who use them would have to absorb the cost.