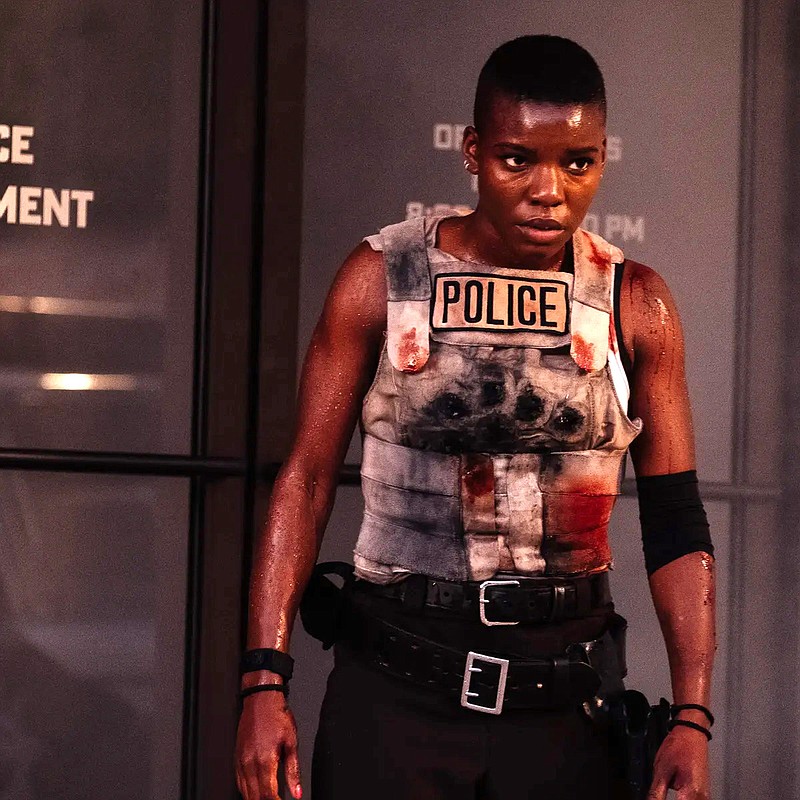 Assault on Gun Creek Police Department: Valerie Young (Alexis Louder), a rookie officer in a desert town where nothing ever happens until a con-man on the run from mob assassins shows up in her jail in Joe Carnahan’s B-movie joyride “Copshop.”

While you won't find anything particularly eye-catching or inventive in its title, "Copshop" just might catch a few people by surprise. This abrasive crime thriller comes from director Joe Carnahan, a filmmaker known for exploring society's gritty criminal underbelly. His latest film may have you checking the end credits to see if Quentin Tarantino's name is attached. That should give you a good idea of the kind of movie Carnahan is shooting for.

In reality, "Copshop" more closely resembles the B-movie schlock that often inspired Tarantino rather than an actual Tarantino movie. And that's not necessarily a bad thing. Co-written by Carnahan and Kurt McLeod, the story feels like something pulled from a 1970s pulp magazine and the evocation of John Carpenter's "Assault on Precinct 13" is hard to miss.

But as movies have shown us countless times, aiming for something and hitting it are two different things. And marrying both style and substance can be tricky. At first glance "Copshop" has all the ingredients for a fun and grimy throwback exploitation flick. The cast is certainly up to the task, even bringing a couple of nice surprises. And cinematographer Juan Miguel Azpiroz shoots the film with a nostalgic verve that energizes the action and the setting. If only the writing had been as sturdy.

Carnahan's modestly entertaining actioner is built around a nifty premise that sets us up for a number of second-half revelations. There's also an infusion of kooky black comedy that may not always work, but it keeps things lively. And of course there's the inevitable violent final act blow-out that packs enough carnage and mayhem to make genre fans smile.

Yet despite all of that, "Copshop" is never quite as suspenseful or engaging as it needs to be. And while the cast does a good job selling their characters, too many are your standard cookie-cutter variety and everyone speaks in the exact same foul-tongued pseudo tough guy vernacular found in many of Carnahan's movies. And while the majority of the performances are on point, everyone ends up constricted by their character types.

Again the premise is solid and it doesn't take long for the story to kick into gear. It mostly plays out over the course of one night at Gun Creek Police Department, a strangely remote yet stylishly modern police station (why it sits literally in the middle of nowhere is one of those glaringly obvious questions you're not supposed to ask in a movie like this).

The first of the key players we meet is con-man and seasoned mob fixer Teddy Murretto (Frank Grillo sporting an anchor beard, a man-bun and one gaudy pair of snakeskin boots). He's a slippery rogue who has frequently eluded death and prison (22 arrests and no convictions we learn). We're introduced to him as he's barreling down a Nevada highway in a bullet-riddled Ford Crown Victoria, the windows busted out, smoke billowing out from under the hood.

Turns out there's a bounty on Teddy's head and he's running from several interested parties who are eager to cash in. One such party is the ruthless and notorious hitman Bob Viddick (Gerard Butler), a career killer known for his no-nonsense efficiency and penchant for violence (he once cut off a man's leg and beat him to death with it – that kind of guy). Viddick's not someone you want hot on your heels so Teddy does something desperate -- he clocks a young deputy named Valerie (Alexis Louder) to get himself arrested. What safer place to hide out than in a jail cell at a local copshop?

What Teddy didn't count on was Viddick doing the same thing. Soon the assassin and the target are sitting in cells across from each other with Valerie trying to put together the pieces. Things get even crazier with the introduction of a second hitman, a psychopathic wildcard named Anthony "Tony" Lamb (Toby Huss), a wildly uneven swirl of disturbing menace and cartoonish silliness. Let the psychological chess matches between the sleazeball, the hired gun, the hero and the maniac begin.

The rest of the running time is filled with snarky interplay, chest-pounding masculinity, cliches galore and more trite cop banter than you can shake a police baton at. Add to it a slew of stereotypes – the loud foul-mouthed police chief, the obligatory crooked officer, the protagonist who just wants to get home to her family. Then we get back to the humor which highlights Carnahan's self-awareness but does more to undermine the suspense than make us laugh.

The real saving grace is the cast, especially the trio at the center of the chaos. Butler is a nice fit and gets top billing for what's essentially a supporting role. While it's true the Scotsman has starred in his share of stinkers, it's nice to be reminded of his legitimate acting chops. Grillo is a Carnahan regular and is right at home in the director's grimy underworld. But the real standout is actress Alexis Louder who matches her two burly veteran co-stars barb-for-barb and bullet-for-bullet. If only the rest of the movie had her spark. 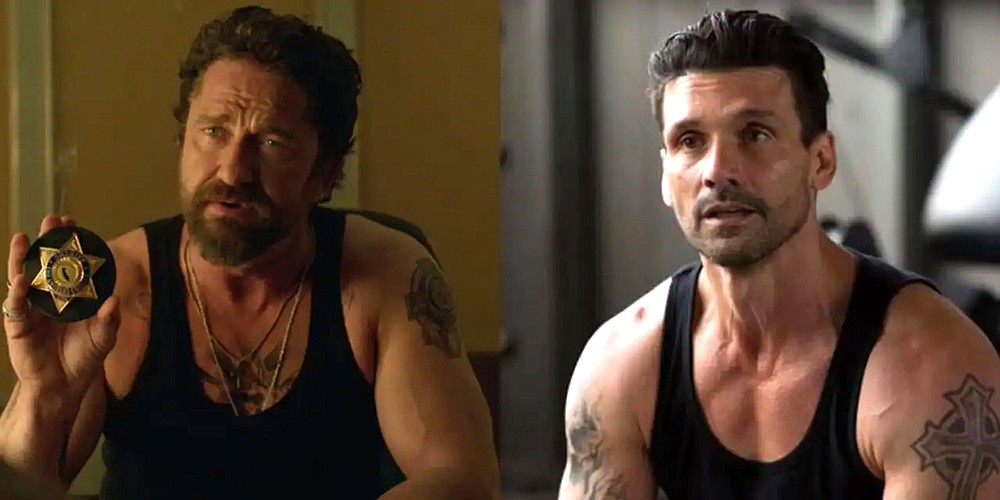 Lock them up: Would-be hit man Bob Viddick (Gerard Butler) gets himself tossed in jail to get next to his intended victim, Teddy Murretto (Frank Grillo) in Joe Carnahan’s over-the-top “Copshop.