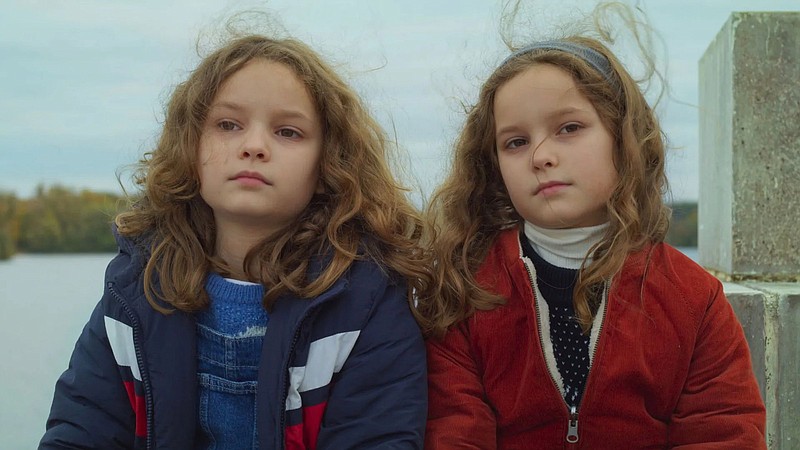 The Toronto International Film Festival has returned in near-full force. Even if the options are somewhat more limited for those not attending the festival in person, there remain plenty of intriguing possibilities to take in.

Herewith, a batch of films from the festival's first opening days.

"Petit Maman" -- Celine Sciamma's charming film is carefully set in early fall, a particularly enigmatic period of time where everything is in transition between summer joy and winter solemnity. We meet 8-year-old Nelly (Josephine Sanz) as she's bidding adieu to the other elderly women in the nursing home in which her grandmother has just died. Along with her grieving mother, Marion (Nina Meurisse), and lackadaisical father (Stephane Varupenne), the young girl goes to her grandmother's house, where her mother grew up, to clear it out for the last time.

Wandering in the woods, she runs into another 8-year-old also named Marion (Gabrielle Sanz), who turns out to be, by some unexplained dint of fate and magic, her own mother, only from many years before. Naturally, the two hit it off immediately and spend the few days they have together playing games, making pancakes, going for a raft ride and enjoying each other's company. Sciamma, whose previous film was the scintillating "Portrait of a Lady on Fire," has again engaged the visual wizardry of cinematographer Claire Mathon, to produce a work of singular, if suitably quiet, beauty.

It is nearly impossible not to fall for Nelly, with her jocular precociousness ("I'm off!" she announces to her parents their first morning in the house, having downed her bowl of cereal), and her old-soul affect -- in one scene, she looks in on her father sleeping in a tiny bed, and sweetly pulls the blanket up over his shoulders -- and the relationship she has with young Marion, even after explaining the situation to her, is remarkably undramatic, almost deadpan. In one of the film's most deeply felt moments, shortly before the pair are forced to split from each other, young Marion tries to put Nelly's fears about her grown-up mother's apparent depression at ease: "It's not your fault," she says, solemnly. "You didn't invent my sadness."

"The Story of My Wife" -- Based on the novel by Hungarian author Milan Fust, Ildiko Enyedi's drama is one of those relationship dramas where spouses act completely inscrutable, no one's happy, and everyone smokes incessantly. That last element is not an understatement: Virtually every scene in the film is formed around the act of characters pulling out their silver cigarette cases and lighting up.

Set in the 1920s, we meet veteran sea captain Jakob Storr (Gijs Naber), as he's boasting to his businessman friend, Kodor (Sergio Rubini) at a Parisian cafe, that he could marry the next female to walk into the place. To everyone's eternal regret, that woman turns out to be Lizzy (Lea Seydoux), a young ingenue, who takes a shine to the hulking captain, and accepts his immediate offer of marriage, even as it might cramp her cosmopolitan lifestyle of hanging out in bars and flirting incessantly with everyone, especially rich twit Dedin (Louis Garrel, who's assortment of mildly disdainful expressions keep things hopping when he's on screen). Soon, Jakob, an honest and straightforward man by nature, is being twisted into emotional knots by Lizzy, who alternately treats the hapless Captain with a winsome cocktail of derision, lust and disrespect, turning her once proud strongman into a whimpering shell. Enyedi employs a steady stream of atmospheric fixed shots -- especially while the Captain is on-board ship -- and the actors do admirable work with a screenplay that feels poorly translated into English at times, but at nearly three hours, and with the minutiae of sufferings the Captain endures documented endlessly amidst the clouds of cigarette smoke, the film overstays its welcome. It has a strong enough draw, but not enough pull.

"Attica" -- A documentary concerned with the infamous 1971 prison uprising in upstate New York, Stanley Nelson's film, via news footage, modern interviews, and New York state surveillance video, depicts the five days in September where inmates overthrew their guards, taking many of them hostage, and tried desperately to peacefully negotiate more humane living conditions for themselves.

The men all united in the central outdoor area of the prison, known as "Times Square," where they demanded to be heard in person by a carefully selected Observation Committee (including certain members of the press, a sympathetic state senator named John Dunne, and Chicago 7 trial lawyer, William Kunstler), along with the state Correctional Commissioner, Russell Oswald. Bargaining in what they thought was good faith, they nearly had reached an agreement with the state, but when one of the beaten guards taken to a hospital later died, Gov. Nelson Rockefeller -- padding the way for a presidential bid and cozying up to President Richard Nixon, the original "law and order" president -- called for a massive build-up of state troopers to pour into the yard and open fire.

In the chaotic bloodbath that followed, some 29 prisoners and 10 hostages were killed, and dozens more were beaten, tortured, and made an example of. Unsurprisingly, the uprising, consisting primarily of prisoners of color, was met with savage brutality, with lily-white law enforcement divisions gleefully opening fire on the prisoners, who had no weapons of their own beyond a few bats and lengths of pipe. Such was the racially charged atmosphere that immediately after the rebellion had been put down -- but before it was revealed that the troopers actually killed a third of the hostages in the process -- a local police captain's update was met with applause and chants of "white power!" from the crowd. Harrowing, but necessary -- Nelson spikes the film's climax with grisly still photos of the dead and suffering -- and yet another sterling document of the sheer brutality those in power will put to use at any challenge to their authority.

"Night Raiders": Since the United States has been so mired in its own racial atonement debate the last few years, it's possible some Americans remain unaware of the racial reckoning happening with our otherwise friendly neighbors to the north. Canada is undergoing a painful examination of its own brutally racist history of forcing indigenous children into special "Indian Residential" schools, where they were routinely beaten, tortured, and killed for nearly a century.

Danis Goulet's film, which she wrote and directed, sets its social commentary in the future, after a brutal civil war has divided Canada into a utopia for "citizens," and a hellscape for anyone from the other side, including, we are to presume, any indigenous people, whose children are identified by roving drones and automatically whisked away to forced indoctrination school. Niska (Elle-Maija Tailfeathers), a Cree bush woman, has been hiding out in the forest with her 11-year-old daughter, Waseese (Brooklyn Letexier-Hart) for years, but when the kid gets her leg caught in a bear trap, and the wound gets infected, her mother is forced to let her get taken away so Waseese can receive proper medical care.

In misery without her, Niska lives in the dilapidated city and spends her evenings outside the fortress-like dormitory where her daughter is being held. There, outside the school grounds, she eventually meets a group of free Cree living in a settlement deep in the woods, where they poach children out of the school to join with them in freedom. Tasked with taking the freed children farther north, Niska only agrees to go if they can first free Waseese. With its direct line to past common practices, Goulet's film could have easily devolved into so much topical didacticism, but instead it's sensitively made, with strong performances from its leads and enough visual acuity (and good art direction) to make it work surprisingly well. As the director pointed out in her commentary before the screening, all of the government policies represented in the film were, in fact, based on the very horrifically real policies of the Canadian government for many gruesome years.

"Murina" -- Many teenagers may profess to hate their parents, but few of them are given as much provocation as Julija (Gracija Filipovic), a young woman living on an otherwise idyllic Croatian island with her demure mother, Nela (Danica Curcic), and utterly domineering, former sea captain father, Ante (Leon Lucev). Subjugated to regular brutish commands from her father, who demands she go spearfishing with him each morning, and unable to convince her mother to leave him, Julija is as trapped as one of the captured moray eels Ante favors for dinner (the film works along such metaphorical lines quite often, as befitting its title).

When an old, very wealthy friend of Ante comes to visit, however, Julija begins to plan a potential escape plan. Ostensibly there to hear out Ante's scheme of building an expensive resort on land the village can't use, Javier (Cliff Curtis), instead takes the opportunity to reacquaint himself with Nela, and become friends with her now hopeful daughter. Antoneta Alamat Kusijanovic's film, which won the Camera d'Or at Cannes in July, is indeed stunning to look at (although with its picturesque cliffs and stunningly blue sea, DP Helene Louvart certainly had a lot to work with), and Filipovic is thoroughly engaging as the oppressed yet fierce Julija -- her anger is almost entirely contained in her eyes, the only thing that betrays her rage at being ordered about incessantly. As lyric as the film is at times, it's still grounded in pretty harsh reality -- there are numerous shots of eels being stabbed, and fish being gutted, with Kusijanovic's unflinching camera holding the shots as if challenging you to turn away -- which makes its enigmatic ending, more dream sequence than concrete, feel like a bit of a cop out.