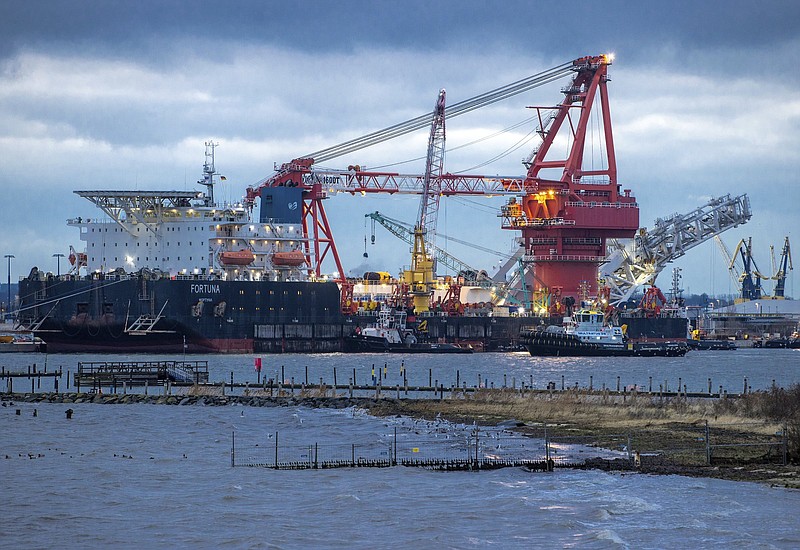 Tugboats get into position to move Russian pipe-laying vessel “Fortuna” in the port of Wismar, Germany, earlier this year. Prices for electricity and natural gas are surging in Europe, raising concerns about politically unpopular increases in utility bills. (AP)

Europe's energy crunch has forced a major fertilizer maker to shut down two plants in the United Kingdom, the first sign that a record rally in gas and electricity prices is threatening to slow the region's economic recovery.

CF Industries Holdings Inc. said Wednesday that it's halting operations at its Billingham and Ince manufacturing complexes in northern England because of high natural gas prices, with no estimate for when production will resume. CF uses large volumes of natural gas to produce hydrogen in a process that makes ammonia for fertilizers.

Gas prices fell as much as 10% and electricity prices dropped almost 6% Thursday before paring declines.

The move comes as Europe is facing an extreme squeeze for energy supplies, with gas and electricity prices breaking records day after day. The continent is running out of time to refill storage facilities before the start of the winter as flows from top suppliers Russia and Norway remain limited.

Wholesale prices for liquefied natural gas are at their highest in years and have more than doubled since the spring. The main causes are a resurgence of global demand, especially in Asia, and worries that European countries are not putting enough fuel in storage to prepare for winter.

The jump in natural gas prices is in turn leading to very high electricity prices because the fuel is used at many power stations, putting pressure on consumers and industry.

UKSteel, an industry group, said Wednesday that its members were facing "extortionate" electric power prices and that some steel-makers were being forced to shut down during periods of extremely high rates.

On Wednesday, a fire that shut down a cable carrying electricity to the U.K. from France led to a further surge in electric power prices.

CF has so far taken the most drastic move of companies operating in the region.

The crisis could have severe economic consequences. Soaring prices are exposing the risk of power outages this winter, according to Goldman Sachs Group Inc. Blackouts would likely send energy prices even higher, compounding concerns about inflation and adding to the rising costs businesses are already shouldering for raw materials.

High energy prices are creating "inflationary pressure on every other cost" that will end up being passed on to customers, said Pascal Leroy, senior vice president of core ingredients at Roquette Freres SA, a food processing company based in northern France. And France's top sugar producer, Tereos, warned of surging natural gas prices raising production costs for the company "tremendously."

In the U.K., many people will see their gas and electricity bills rise next month after the nation's energy regulator approved a 12% price increase for those without contracts that lock in rates. Officials in Italy have warned that prices will increase 40% for the quarter that will be billed in October.

And in Germany, retail electricity prices have already hit a record 30.4 cents per kilowatt hour, up 5.7% from a year ago, according to comparison site Verivox. That amounts to $1,252 a year for a typical household. And prices could go higher still since it can take months for wholesale prices to be reflected in residential bills.

Europe's energy markets are also just the latest example of the toll that soaring commodity prices are having on the global economy. Tight supplies of everything from aluminum to grains to oil have sparked concerns over a lasting run for inflation. Higher costs for heating homes will bite into consumer wallets at a time when they are also paying more for food and many are still struggling from the pandemic's economic fallout.

For CF, shutting down the two plants, which largely produce ammonium nitrate, will cause the company to lose some production volume, according to Alexis Maxwell, an analyst at Bloomberg Intelligence. The bigger potential impact will likely be on global pricing for fertilizer as concerns grow that other producers will follow suit, she said.

"The market will read this as other European producers are likely to shut down, and nitrogen prices will continue to rise on the supply-side shortage," Maxwell said.

Fertilizer prices are already high, and that's adding to increasing expenses for farmers, who are paying more for everything from land and seeds to equipment. The higher costs of production may mean even more food inflation is on the way.

"We wouldn't be surprised to see more nitrogen and chemicals production across Europe idled in the coming days until gas prices moderate," Joel Jackson, an analyst at BMO Capital Markets, said in a report.

Information for this article was contributed by Elizabeth Elkin and Isis Almeida of Bloomberg News (WPNS); by Stanley Reed of The New York Times; and by David McHugh, Aritz Parra, Colleen Barry in Milan, Sylvie Corbet in Paris and Danica Kirka.