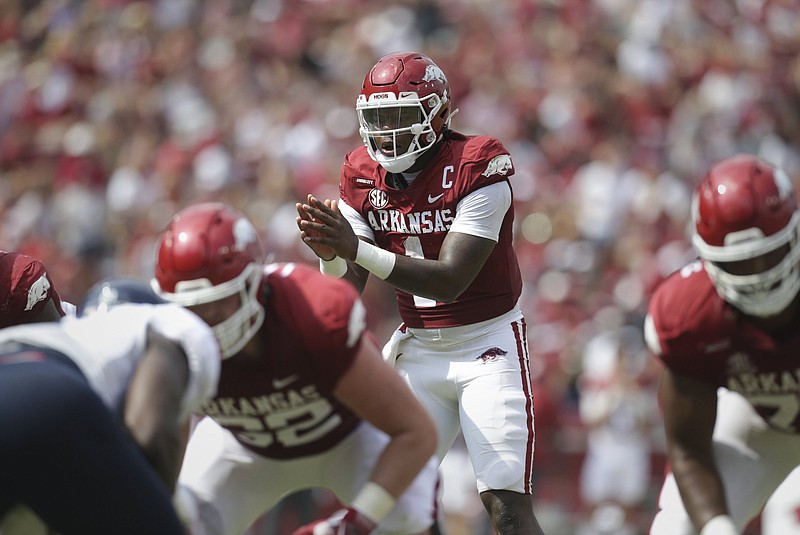 Arkansas quarterback KJ Jefferson is 22-of-29 passing for 245 yards with 1 touchdown, i interception and 1 sack over the past six quarters after struggling in the first half of the opener against Rice. (NWA Democrat-Gazette/Charlie Kaijo)

FAYETTEVILLE -- KJ Jefferson made a quick recovery from the first half of the season opener.

The first-year starting quarterback for the University of Arkansas was shaky like the rest of the Hogs' offense early against Rice, but since then the redshirt sophomore has been mostly on his game.

Over the last six quarters, Jefferson has been nearly flawless on his run reads, completed 22 of 29 passes (75.9%) for 245 yards, has thrown 1 touchdown pass, 1 interception and taken 1 sack.

Coach Sam Pittman credited Jefferson's poise and presence in the run-pass option game for helping the Arkansas tailbacks exploit cut-back lanes against Texas last week. The Razorbacks ran all over the Horns for 333 yards, many of them on cuts after their first reads were bottled up.

"Our quarterback holds that cutback lane," Pittman said. "I think they're worried about his read and what it's going to be and is he going to run the ball back there."

Pittman said the precious half-seconds it takes for defenders to read Jefferson as he makes his mesh with the backs is critical.

"If you can just get the linebacker or ... whomever it is or safety support to freeze for a second," Pittman said. "A half a second in the game of football is a big, big deal."

Pittman said that additional fraction of a second might have been the difference between Raheim "Rocket" Sanders' 26-yard touchdown being more like a 4-yard gain.

"He got hit in the leg I believe, but he didn't go down," Pittman said. "Take another half second and the guy form tackles him. That support was slow I thought, maybe."

Pittman said the Razorbacks' lone turnover against Texas, an interception thrown by Jefferson at the Arkansas 35 early in the third quarter, was nearly a huge play the other way. Jefferson slightly under-threw a slant for Ketron Jackson Jr. over the middle and Texas safety B.J. Foster tipped and intercepted it to set up a Texas 26-yard touchdown drive to cut Arkansas' lead to 16-7.

Georgia Southern cornerback Derrick Canteen, a Freshman All-America pick with six interceptions last year, has been ruled out for the season.

Canteen suffered a pectoral muscle injury in last week's 38-6 loss to Florida Atlantic and received the medical prognosis in the middle of the week.

Tyler Bride, a 5-10 sophomore from Atlanta, is expected to start in his place.

Arkansas Athletics Director Hunter Yurachek called the $100,000 fine incurred from the SEC this week "worth it," referencing the exposure the moment provided, but also the lack of confrontation between fans and law enforcement that would have been tasked with keeping them off the field.

Speaking at the Hawgs Illustrated Sports Club, Yurachek said he did not want to be flippant about the dollar amount, but he added there was some tradeoff in the amount of exposure the Razorbacks received for the celebration that followed a 40-21 victory over Texas. Several thousand Arkansas fans ran onto the field immediately following the win, a scene that was shown on highlight shows and shared thousands of times on social media.

Ratings this week estimated an average of 3.4 million people watched the game on ESPN, which is the highest-rated game through two weeks on a cable network.

"I think some of that exposure is because that happened and it happened safely," Yurachek said.

According to figures posted at ShowBuzzDaily.com, the game between the Razorbacks and Longhorns drew an average of nearly 3.4 million viewers on ESPN. That figure is a 110% increase over ESPN's same window for the second week of the 2019 season for a game between BYU and Tennessee. Most teams had not begun playing this time last year.

A big night in sports, coupled with Arkansas' runaway victory, likely drew some eyeballs away from the ESPN broadcast. The Michigan-Washington game on ABC averaged 4.7 million viewers, and the 20th anniversary Sept. 11 baseball game between the New York Yankees and New York Mets averaged 2.4 million viewers on Fox.

Oregon-Ohio State on Fox (7.7 million); Michigan-Washington on ABC; Texas A&M-Colorado on Fox (4.5 million); and Iowa-Iowa State on ABC (3.9 million) averaged more viewers than the game between the Razorbacks and Longhorns.

Coach Sam Pittman was asked this week about Treylon Burks' slow start. The preseason All-SEC selection leads the Razorbacks with 10 catches, but with only 79 receiving yards, he's averaging 7.9 yards per catch, with no touchdowns.

"He caught five balls in the first half, and we were running for 7-plus yards a carry," Pittman noted. "I will say this, he was the happiest guy in the locker room, blocking his tail off and all that. So, I think he would tell you he didn't have a good first game. We felt like he played really well this game, and he did what we asked him to do, and he did it with a great attitude."

Burks returned to practice after suffering a lower leg issue that required a walking boot two days prior to the season opener against Rice and he did not play well in that game.

"It's hard to do, you know, if you're getting all these accolades and you're worried about being drafted in the first round and all that," Pittman said. "It's hard to put the team first, it really is. But he does it and does it well. And to be honest with you, he's setting a great example, and it makes our team better."

Georgia Southern Coach Chad Lunsford did his part building up the Razorbacks' status in the rebuild under second-year Coach Sam Pittman.

"A huge offensive line, like trees," Lunsford said. "What are those trees called in California, redwood trees? You can't even get your arms around them.

"I think that's where it starts with them, because they want to run the football. I know Coach Pittman, he's an offensive line coach. They're going to be down and dirty and trying to make sure they establish the run."

Coach Sam Pittman and the Arkansas coaches touted freshman tailback AJ Green's sprinter's speed over and over during camp. Even though Green was not an early enrollee like fellow freshman tailbacks Raheim Sanders and Javion Hunt and he missed both scrimmages in camp, partly due to a concussion, the coaches were determined to get him game reps early this season.

Green made the decision pay off with 67 rushing yards, including a 30-yard touchdown run, on 7 carries against Texas.

Arkansas legacy Mataio Soli has already had a fascinating college career and he added to that with a 4-yard punt return last week.

Soli was in the right place to snag a punt partially blocked by Jake Yurachek off the foot of Cameron Dicker, who dropped a perfect snap. Soli returned the punt to the Texas 14 to set up Cam Little's 24-yard field goal to give Arkansas a 13-0 lead midway through the second quarter.

Soli, the son of former Razorback Junior Soli and wife Karen, started 11 games as a true freshman in 2019 and posted 19 tackles and 2 hurries while playing with a huge wrap on a broken hand.

Soli has had to battle for playing time on a deeper front this season, and has two tackles, including a half-sack last week with fellow legacy Zach Williams.

Coach Sam Pittman was asked if it was Soli's 6-4, 245-pound frame that limited his playing time.

"I mean, if he wants to move up the depth chart, he'll practice better and he'll beat somebody out," Pittman said. "But it's not lack of size or anything. It just happens to be where he is on the depth chart right now."

The 5-11, 275-pound redshirt senior from Watkinsville, Ga., and a four-game starter in 2020, is into the country music scene, and he already has some recordings.

Adcock has released two singles, the appropriately named "We Love Football," and a follow-up called "Ain't No Cure."

The Razorbacks have six native Georgians on their roster while the Eagles have no players from Arkansas.

Georgia Southern has a 2-18 record against teams ranked in Tthe Associated Press Top 25 poll, where the Razorbacks reside at No. 20 this week.