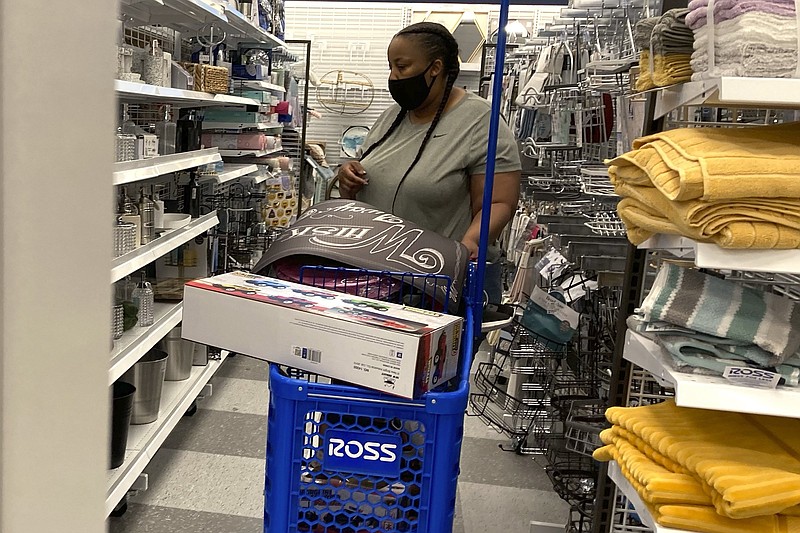 A shopper looks at merchandise at a retail store in Morton Grove, Ill., in this file photo. Americans continued to shop in August with retail sales rising 0.7% in August from July, the Commerce Department said Thursday. (AP)

Americans continued to spend at a brisk pace last month in the face of rising covid-19 infections, though much of it was done online and not at restaurants or other sectors in the U.S. economy beleaguered by the arrival of the delta variant.

Retail sales rose a seasonally adjusted 0.7% in August from the month before, the U.S. Commerce Department said Thursday. That uptick caught most economists by surprise. Consensus estimates were for a decrease of 0.85%, according to a survey of economists by FactSet.

Online sales soared 5.3% last month, while sales at restaurants and bars, many of which believed they were through the worst of the pandemic until the arrival of delta, were flat from the month before.

That stagnation is "partly tied to the end of summer, but it's also tied to fear of the virus when going into a bar," said Beth Ann Bovino, chief U.S. economist at S&P Global.

Earlier this year as millions were vaccinated, restaurants, bars and other venues that rely on crowds began to bustle for the first time since early 2020. Then, in July, U.S. health officials recommended that even vaccinated people should wear masks when indoor in public because of the unchecked spread of delta, particularly in regions of the country with lower vaccinations rates.

Vaccine hesitancy in the U.S. is being cited by economists after the Labor Department reported this month that employers added just 235,000 jobs in August, far short of the million or so jobs added in each of the previous two months.

Back-to-school shopping may have given retail sales a boost. Sales at department stores rose 2.4% last month, according to the Commerce Department, as children headed back to the classroom and perhaps for the first time in more than a year, bought new clothing and other supplies.

Sales of cars and auto parts were down 4.5% in August. The auto industry has been hit by a shortage of computer chips, causing Toyota Motor Corp. to recently announce plans to slash production by about 40%.

Prices of consumer goods continued to climb in August, albeit at a slower pace, according to data from the Labor Department released this week. The Consumer Price Index rose 5.3% in August from a year earlier, the data showed, suggesting inflationary pressures were starting to ease.

"Households are sitting on a lot of cash," Bovino said. "We expect to see a robust holiday spending season."

The retail report released Thursday covers only about a third of overall consumer spending and doesn't include services such as haircuts, hotel stays and plane tickets. There is clear evidence that spending has waned in some of those industries. Airlines, for example, recently reported a drop-off in ticket sales and they blame the spread of the delta variant.

Auto sales continued to fall last month, likely because fewer cars were made because of a pandemic-related shortage of chips, which are needed to power screens and other tech features in cars. Sales at auto dealerships sank 3.9% last month, the Commerce Department said.

Some economists still hope for a larger bump in consumer activity this year. The four-week average of jobless claims, which smooths out fluctuations in the weekly data, dropped for the fifth straight week, the Labor Department said Thursday. It's now lowest since the pandemic began.

More people are finding jobs and many of those who have remained in their jobs have saved cash during the pandemic and will have more to spend, said Sal Guatieri, a senior economist at BMO Capital Markets.

However, much depends on whether the U.S. can contain the spread of the virus.

The Labor Department also reported Thursday that the number of Americans seeking unemployment benefits ticked higher from a pandemic low last week, a sign that the spread of the delta variant may have slightly increased layoffs.

"While spending on goods was much stronger than we anticipated, that presumably will just add to the shortages seen in recent months, while the flatlining of spending in restaurants and bars suggest that the broader recovery in services consumption probably faltered," Michael Pearce, senior U.S. economist at Capital Economics, said in a note.

Information for this article was contributed by Joseph Pisani of The Associated Press, by Coral Murphy Marcos of The New York Times and by Reade Pickert of Bloomberg News (TNS).