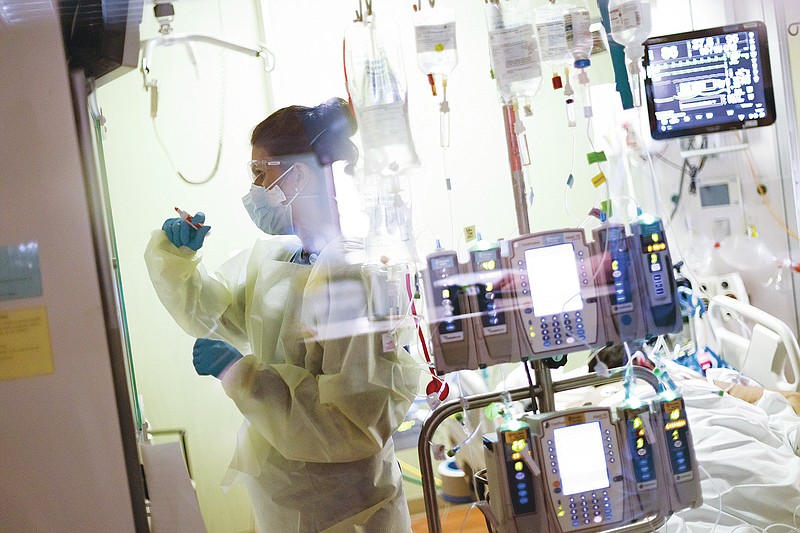 FILE - In this Tuesday, Aug. 31, 2021 file photo Ann Enderle R.N. attends to a COVID-19 patient in the Medical Intensive care unit (MICU) at St. Luke's Boise Medical Center in Boise, Idaho. Idaho's public health officials say crisis standards of care are &quot;imminent&quot; for the state's most populated region as hospitals in the Boise area continue to be overrun with unvaccinated coronavirus patients. Hospitals in the northern half of the state were given permission to begin rationing care last week. (AP Photo/Kyle Green,File)

COEUR D'ALENE, Idaho -- Northern Idaho has a long and deep streak of anti-government activism that has confounded attempts to battle a covid-19 outbreak overwhelming hospitals in the deeply conservative region.

A deadly 1992 standoff with federal agents near the Canadian border helped spark an expansion of radical right-wing groups across the country, and the area was for a long time the home of the Aryan Nations, whose leader envisioned a "White Homeland" in the county that is now among the worst hit by the coronavirus pandemic.

Hospitals in northern Idaho are so packed with covid-19 patients that authorities announced recently that facilities would be allowed to ration health care.

"This is extremism beyond anything I ever witnessed," Tony Stewart said of people who refused to get vaccinated and wear masks.

Stewart is a founding member of the Kootenai County Task Force on Human Relations, which battled the Aryan Nations for decades and helped bankrupt the neo-Nazi group. "I'm almost speechless in seeing so many people have lost concern for their fellow humans."

Only 41% of Kootenai County's 163,000 residents were fully vaccinated, well below the state average of about 56%, officials said.

State Rep. Heather Scott, a Republican from Blanchard in the northern part of the state, refused an interview request, saying reporters were liars. Scott promoted mask-burning protests around northern Idaho and the rest of the state earlier this year. She is also among the lawmakers that have frequently pushed misinformation about covid-19 on Facebook.

Stewart called fierce opponents of vaccines an "irrational segment of the population."

But not everyone agrees there is a problem.

David Hall, 53, who co-owns a restaurant in bustling downtown Coeur d'Alene, said Sept. 10 he "serves hundreds of customers a week and I've heard of nobody that's been hospitalized."

"Not a single person who worked for me got it," Hall said of covid-19. "I don't know where (patients) are coming from."

One thing Hall does know is news of packed hospitals is bad for business, saying his revenues have dropped.

Don Kress, 65, of Coeur d'Alene, said he believes that Kootenai Health, the town's major hospital, is overflowing with patients.

"It's become such a politicized issue," he said of covid-19. "If you take the politics out of it and let common sense prevail, people will get the shot."

Northern Idaho has had an anti-government segment of the population for decades. It was the site of the standoff at Ruby Ridge, north of the town of Sandpoint.

Randy Weaver moved his family to the area in the 1980s to escape what he saw as a corrupt world. Over time, federal agents began investigating the Army veteran for possible ties to white supremacist and anti-government groups. Weaver was eventually suspected of selling a government informant two illegal sawed-off shotguns.

To avoid arrest, Weaver holed up on his land.

On Aug. 21, 1992, a team of U.S. marshals scouting the forest to find suitable places to ambush and arrest Weaver came across his friend, Kevin Harris, and Weaver's 14-year-old son Samuel in the woods. A gunfight broke out. Samuel Weaver and Deputy U.S. Marshal William Degan were killed.

The next day, an FBI sniper shot and wounded Randy Weaver. As members of the group ran back toward the house, the sniper fired a second bullet, which passed through wife Vicki Weaver's head -- killing her -- and wounding Harris in the chest. The family surrendered on Aug. 31, 1992.

The Aryan Nations was not specifically anti-government, but it drew many disaffected people to the area after white supremacist Richard Butler moved there in 1973 from California.

Four years after moving to rural Kootenai County, Butler -- a former aeronautical engineer -- started a compound. The 20-acre site north of Hayden Lake would become a racist encampment that drew people from across the country. The group held parades in downtown Coeur d'Alene and annual summits at the compound. By the 1990s, the Aryan Nations had one of the first hate websites.

The Aryan Nations compound and its contents were burned and bulldozed after a lawsuit brought by the Southern Poverty Law Center bankrupted the group in 2000.

Now covid-19 has exacerbated conflicts in Coeur d'Alene, a fast-growing resort and retirement community that hugs the shore of a namesake lake and draws celebrities and the rich to gorgeous lakefront homes. High-rise condos have replaced lumber mills near the lakefront, and swanky stores abound.

Covid-19 has thrived in this environment.

Jeanette Laster is executive director of the Human Rights Education Institute, which was established in the wake of the Aryan Nation's rise in the region.

She cautioned that it is incorrect to assume that the neo-Nazi philosophy of the Aryans is related to the anti-government sentiments that now dominate the political agenda.

The Aryan Nations was a white supremacist, antisemitic group, she said, while anti-government sentiments are rooted in freedoms guaranteed by the Constitution.

"I don't feel the majority of our community is hateful," Laster said. "This is more about constitutional rights."

Distrust of the media and authorities is also an issue, she said.

"People are begging for accurate information," Laster said. "There's a lot of fear." 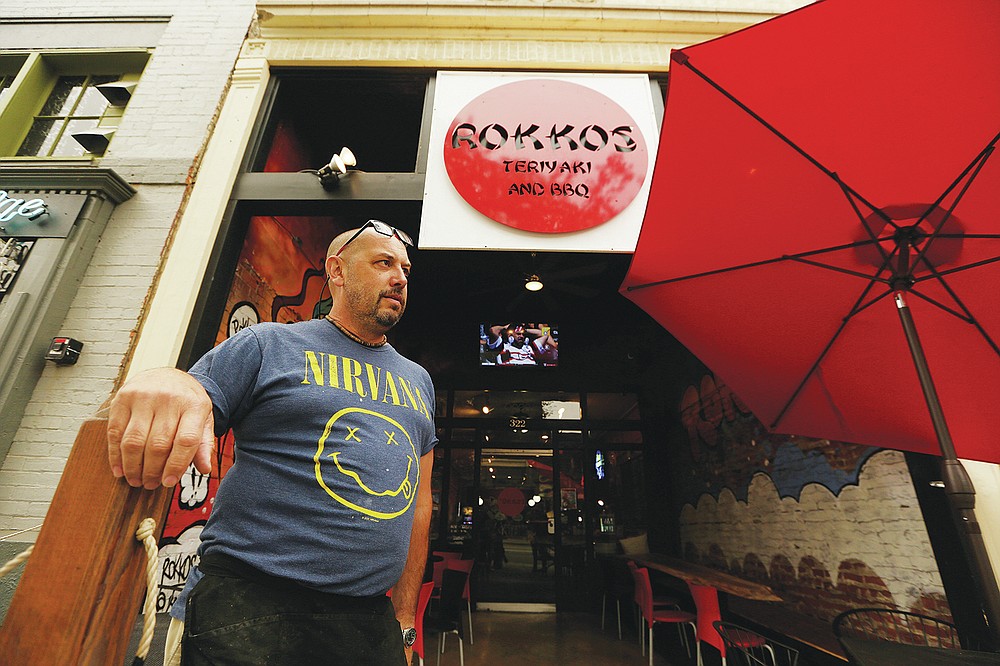 David Hall, co-owner at Rokkos Teriyaki and BBQ, speaks about the effects on business due to coronavirus, Friday, Sept. 10, 2021, in Coeur d'Alene, Idaho. Northern Idaho has a long and deep streak of antigovernment activism that is confounding attempts to battle a COVID-19 outbreak.(AP Photo/Young Kwak) 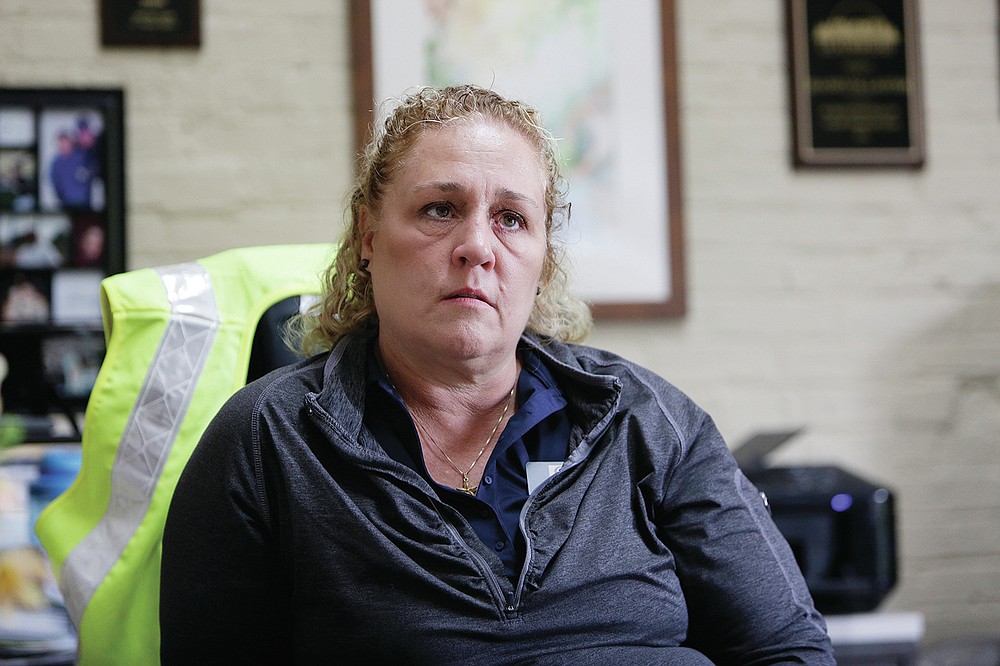 Jeanette Laster, the executive director at the Human Rights Education Institute, speaks about the differences between the current Constitutional rights politics associated with the coronavirus and the hate groups that existed in the area in the past, at her office, Friday, Sept. 10, 2021, in Coeur d'Alene, Idaho. (AP Photo/Young Kwak) 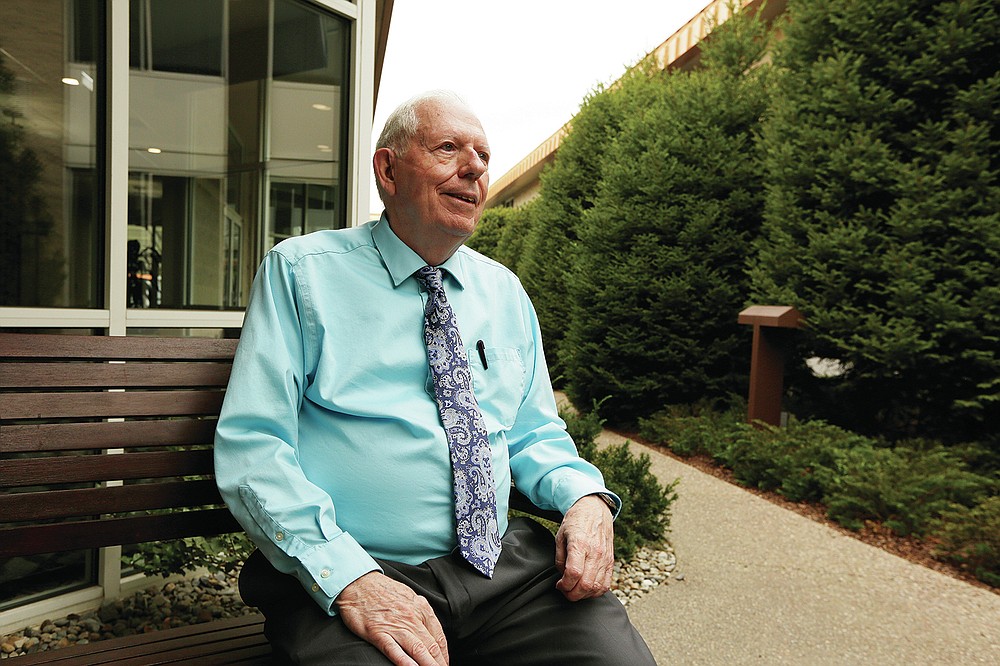 Tony Stewart, a founding board member of the Kootenai County Task Force on Human Relations, poses for a photograph at the Best Western Plus Coeur d'Alene Inn, the location where the organization has held its annual banquet, Friday, Sept. 10, 2021, in Coeur d'Alene, Idaho. (AP Photo/Young Kwak) 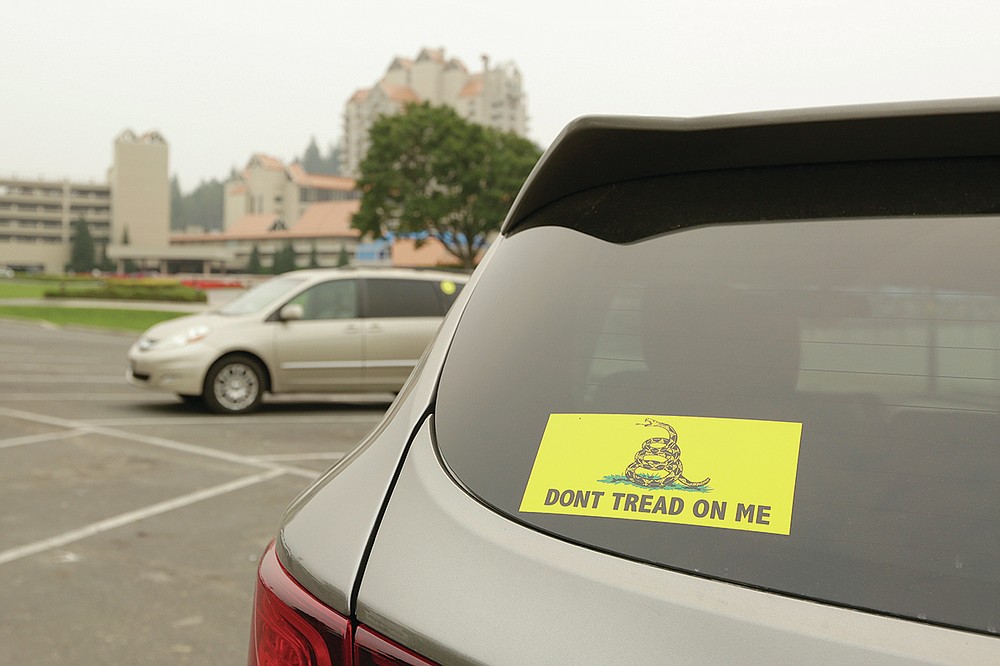 A vehicle with a Gadsden flag sticker is parked in the lot at Independence Point, Friday, Sept. 10, 2021, in Coeur d'Alene, Idaho. Northern Idaho has a long and deep streak of antigovernment activism that is confounding attempts to battle a COVID-19 outbreak.(AP Photo/Young Kwak) 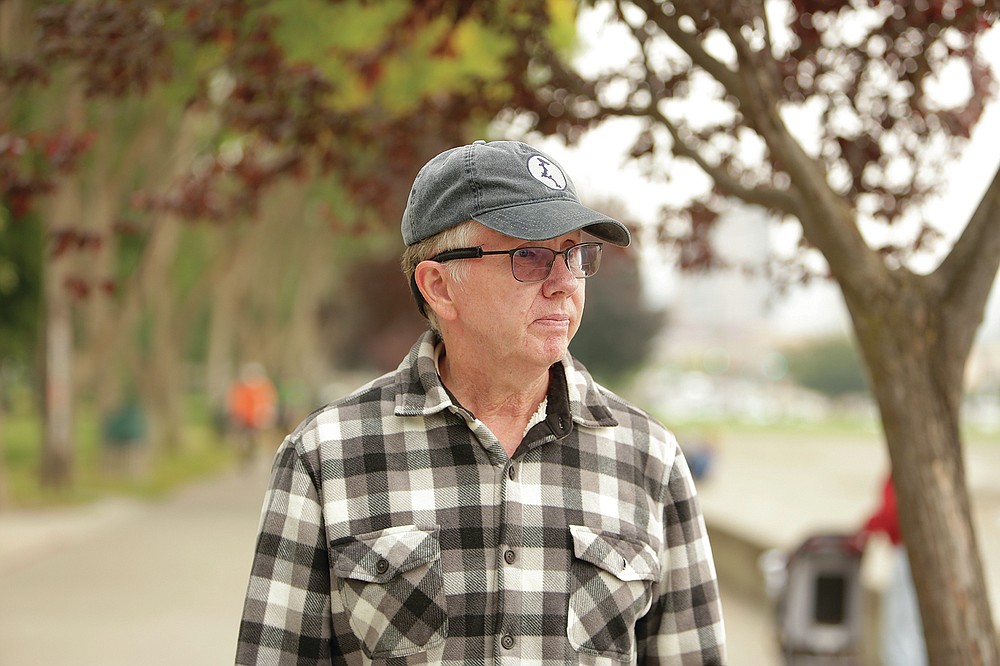 Dan Kress speaks about his support for efforts to stop the coronavirus at Coeur d'Alene City Park, Friday, Sept. 10, 2021, in Coeur d'Alene, Idaho. Northern Idaho has a long and deep streak of antigovernment activism that is confounding attempts to battle a COVID-19 outbreak.(AP Photo/Young Kwak) 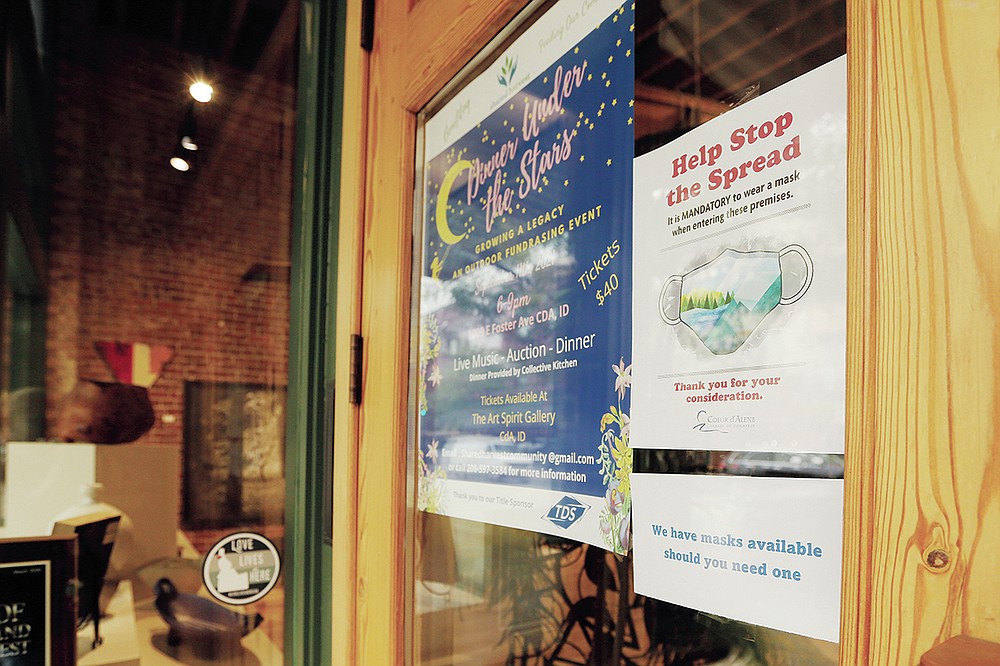 A mandatory mask usage sign is displayed at Art Spirit Gallery, Friday, Sept. 10, 2021, in Coeur d'Alene, Idaho. Northern Idaho has a long and deep streak of antigovernment activism that is confounding attempts to battle a COVID-19 outbreak. (AP Photo/Young Kwak)